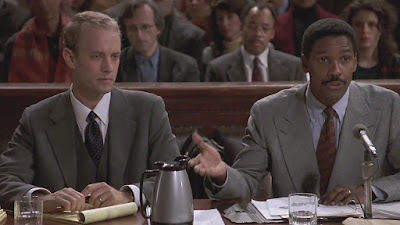 There are two stories running parallel through the course of events in “Philadelphia”: one about a man dying of AIDS, and the other about a former colleague learning to find acceptance of alternate lifestyles. Their struggles converge early on in a moment that plays like accidental destiny, when one of them arrives at the office of the other in hopes that he will take on a case of wrongful termination. The scenario: Andrew Beckett (played by Tom Hanks) believes he was fired because of his illness, a factor that came to light suddenly after he was promoted high up into a law firm partnership. So few share in that perception, however, and when he arrives in the presence of the cynical Joe Miller (Denzel Washington), it is because all other possibilities have already been exhausted. Joe shares in that skepticism, but is also silently unnerved by the discomfort of being around a gay man dying of a contagious disease. But through scrupulous desires to take on big challenges, eventually he comes back around to representing the case, all while acknowledging that his client’s own death sentence is fated to be more than just a peripheral detail. That discovery is ultimately what gives added validity to these two intersecting lives, whose mutual wisdom and courage are made universal in a situation where an uninformed mind must ask itself: at what point must we overcome personal prejudice and realize that we all share the same right to live without persecution?

Jonathan Demme’s thoughtful human drama was certainly not the first movie to confront the AIDS crisis, nor was it the first that would herald the issue as socially urgent. But it was, even in the conventional skin of a courtroom drama, the most heartbreaking and passionate undertaking of its kind, in an era of political correctness that kept the most unmentionable subjects from finding their way into the minds of Hollywood audiences. Demme not only sensed this reality, but seemed to find inspiration in the underlying wisdom of “To Kill a Mockingbird,” another courtroom film involving prejudices in the justice system. In principal, his endeavors were a conduit for creating basic awareness through faces we regarded as familiar and likable; in actuality, the result went beyond the formula of the legal genre and created powerful emotional punches that reduced many to tears, including myself.

As a rule of personal displacement, I seldom respond expressively to movies made with tragic sincerity, especially since graduating to adulthood. Often it removes objectivity. After the childhood traumas of Bambi’s loss of a mother and E.T.’s journey home, we tend to harden with the passing time. The teenage years can sometimes be the ultimate test of that endurance, made all the more obvious by the notion that most in that age range choose to watch more thoughtless films full of kinetic action and pedestrian dialogue. But “Philadelphia” snuck into my awareness at age 13, when I least expected it to, during a health curriculum in High School that demanded education for the growing problem of HIV and AIDS. In the same year that yielded “Schindler’s List” and “The Joy Luck Club” – two more thoughtful films with very volatile emotional thrusts – this played like a wake-up of personal sensibilities. Was it by circumstance that I had wound up seeing all three within six months of each other? I choose to believe it was fate. Andrew Beckett’s fight was so thorough and focused that it was not merely the struggle of one dying man fighting against a system; it was the projection of every battle going on in the streets, where a cruel society continued to harbor an unnecessary fear against the disease they were still not understanding (a disease, no less, that endured delayed funding because of its association with the gay community, which had already weathered its own castigating). This was more than just a movie; it was an act of responsibility.

Much has changed (thankfully) since those years in regards to the treatment of victims of AIDS, but the underlying struggles remain universal. All one has to do is replace details within Beckett’s life with those that run abundant as taboos in the 21st century (gay marriage, transgender equality, laws against same sex adoption), and what you have is a perennial archetype for the challenges of minorities. While being gay is not the primary concern of “Philadelphia”s screenplay, the mention is prevalent. Hanks stars as the aforementioned Beckett, who in the early scenes is at the top of his game at a law firm that values his skill and dedications – so much so, in fact, that he is lauded into greatness by aged professional supervisors who promote him high up. During the obligatory celebration, one of them takes notice of some kind of lesion just above his hairline. He plays it off as an accident from a skiing trip. No other mention is made of the exchange – even when the movie spies him in the following scenes covering the lesions with more makeup – but when he is whisked away to the emergency room because of stomach pains, it acts as the first of many unfortunate circumstances that culminate in a very suspicious firing. While the firm cites carelessness in relation to a case file, Andrew’s mind knows how to read between the lines. Why else would any company, realistically, terminate someone they have just promoted to the top bracket, especially when the file issue was corrected before deadline anyway?

His reality, doomed to a certain death sentence as his health declines, nonetheless moves forward in earnest resolve. After Joe’s refusal to take on such a powerful law firm, his disappointment does not conclude in any concession, either; the movie observes him lumbering along with his nose in legal books and periodicals at the library, all while his sickness becomes increasingly visible to passers-by (when the librarian asks him if he would be more comfortable in a private room, his response is one of necessary audacity: “no, but would it make you more comfortable?”). Joe watches on from a distance with ignorance interlaced with fascination. What keeps him going on, so resistant to the inevitability of failure? It is an observation that eventually inspires the lawyer’s own turn-around, and with effective timing – Andrew is getting worse, and the case is ready to go trial just as his body is brought down by the progression of full-blown AIDS. Not content to simply exist in the courtroom setting, however, “Philadelphia” wisely intercuts that succession of legal hearings with observations of personal lives: Joe with his wife, arrogant and dismissive of “faggots”; Andrew’s loving relationship with his partner (Antonio Banderas), who watches over him with stubborn affection; brief encounters with extended family, who love Andrew regardless of his problems and silently mourn as certain death awaits him (his mother, played by Joanne Woodward, is very moving); and even brief dialogues between the figureheads of the law firm and their defense attorneys, all of whom will do anything in their power to win the case, even if it includes destroying a man’s reputation in his dying moments.

The constant in this story is that Beckett must stick to his conviction throughout the course of the film with unwavering dedication, even though the odds are so clearly stacked against him. Is that because he is at the point where he has nothing left to lose? The issue is far more complex than just mere desperation; it has to be, otherwise the film would have been a trivial exercise of its themes. Hanks’ portrayal is not one of overreaching sympathy, either; he is simply a man who knows he is losing his battle with AIDS, and wants to go out fighting for his rights in a system that must answer for corrupt behaviors. There is also no doubt in the candidness of Hanks’ ability to stare piercingly through the stigma of his character’s minority status. He is deadpan, realistic and heart-wrenching. That in turn informs not only our conclusions, but also those of his lawyer, a man whose views aren’t necessarily mandated by genuine feelings as they are merely reflective of a regressive social climate. There is a scene they both share in the latter half that is so utterly harrowing in its emotional pull that there is no room for mistaking its central motives; as Beckett discusses one of his favorite opera pieces, the music carries him into a trance-like state of passion, and in that moment Mr. Miller no longer begins to see his frail client as more than a distant figure in a difficult case. They are one in the same: men without boundaries, each deserving of the same prosperous dreams.

It is the pattern of humanity, alas, to separate such realities because of ignorance and misconception. While Beckett’s tragic final hours may not seem as directly relatable now in an era when gay rights (and HIV treatments) have greatly progressed, so much of the central thread of “Philadelphia” revolves around the unending likelihood of prejudices. Before the question of gay rights, it was a question of civil rights for African Americans; prior to that, the rights of women. And in many of these examples, each minority is usually branded with a stigma that only cloaks the real issue. Were women, for example, smart enough to vote? Did African Americans deserve privileges when there was so much crime and poverty in their neighborhoods? And what did the homosexual community have to offer beyond the likelihood of the spread of HIV? Not a single one of these examples is validated by any substance or evidence; they are knee-jerk assumptions used to dismiss dealing with imbalanced justice scales. Here remains one of the best movies ever made about such issues, a collective parable about the fight between right and wrong, and how we are doomed to allow further tragedy if we do not open our eyes to the needs of others different from us. And twenty years later, it still has the power to leave us wondering such things without resorting to cheap or unnecessary melodrama.