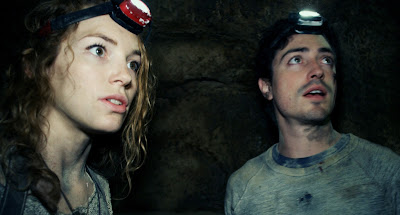 If I was to describe “As Above, So Below” as a handheld horror movie about a group of archaeology enthusiasts who wander into the Paris catacombs and discover the gates of hell, most readers would be inclined to respond with guffaws. But if I were to tell you that the premise lays the groundwork for a rather thrilling assemblage of shocking twists and turns, would those scoffs become intrigue? It is our instinct as seasoned moviegoers to dismiss the ideas of an endeavor if it is in the service of a tired gimmick, and who can blame us? The “found footage” device – sometimes referred to as the “queasy-cam” technique – has persisted vehemently through the fabric of the modern horror genre, and seldom to the benefit of intriguing stories or serviceable characters. But this, a relatively unassuming excursion with simple goals, carries something simmering under the surface that goes to violate the quintessential acceptance of these movies, which often stumble on a tightrope that reduces dialogue to nonsensical shouts and the images into a blurry collage of details. And that doesn’t even count the narratives, which are often circular exercises designed to set up momentary jolts or elaborate death sequences

Here is a marvelous little scarefest that is the antithesis of the standard: a movie that builds a great aura of tension while refusing to allow the formula to become a detriment to the events we see. Certainly there are logistics that don’t add up in this conviction, and many of the details will inspire more cerebral sorts to howl at the simplified explanations. But rarely has my gut become such a cluster of knots in watching a journey of this nature unfold, or my eyes so thoroughly transfixed on the outcomes of those who are destined to become victims. And I think a solid majority of those responses come down to the sharpened values of its director John Erick Dowdle, who has dwelled in this genre abundantly and has come to realize the purpose of the handheld camera as a mood tool rather than an object of dependence. After “The Poughkeepsie Tapes,” “Quarantine” and “Devil,” it is apparent that he may be on his way to cultivating the wild nature of modern horror films into something of dependable resonance.

The story deals with the audacious antics of young Scarlett (Perdita Weeks), an eager British archaeologist (I’m assuming) who is seen in the early scenes trespassing on sacred ground somewhere in Iran; she has arrived to gaze upon a legendary lost statue buried in a tunnel system beneath the city, an object so precious and elusive that not even her deceased father – the apparent master of this occupation – was ever able to discover it himself. But what her findings yield isn’t so much a justification of the search as it is a suggestion of the elaborate ruses of ancient civilizations, most of which were apparently in on a colossal joke to keep would-be adventurers searching the globe for mere morsels of insight into even greater (and more menacing) discoveries half a world away. The statue in Iran is, in fact, a key to the discovery of an even more important object, and on its surface are engravings of ancient symbols that must inevitably point to the coordinates of that which she truly seeks: the legendary Philosopher’s Stone, which can do things that defy scientific reasoning (including turning other substances into pure gold, we are told).

The language of the symbols, unfortunately, is too old even for her brilliant mind to grasp, and that leads her to seek the assistance of a disgruntled adventurer named George (Ben Feldman), who isn’t exactly happy to see her since their last excursion together concluded with his arrest in a foreign nation. As their exchanges of information – and arguments – are filmed by the camera of a sarcastic sidekick (Edwin Hodge), they also enlist the help of three French dignitaries to take them through the catacombs of Paris, where the stone itself – as well as untold amounts of treasure – must reside. But there are obligatory questions that arise long before the descent is underway. Why did its original owner, the supposed father of Alchemy, bury this artifact in such a conspicuous location as that of his own tomb? Why is the site of this burial so far off the map of the actual catacombs? Does that suggest the blueprints are incomplete? Or were the ones who made them purposely hiding something more than just the location of a trove of riches?

The movie plays it straight with the plot details but then gradually floods them with the pulp of a malevolent force that seems to lurk just beyond the lines of sight of the characters. Not a moment of their journey is overwhelmed by knee-jerk dialogue or irrational impulses, either; they are people who know exactly what they are doing and why, even if they are uncertain of what lies ahead. Inevitably those two realities converge, but not in grandiose ways; there is more to be alarmed by, for instance, in a moment where the anxious Papillon (Francois Civil) warns against using a specific tunnel because of how no one ever survives going through it, and then shows us the last known victim showing up alive and well in order to push them further on into even more uncertain locales. The deeper they go, the stranger the events become. They hear distant laughter, witness strange geographic anomalies, an experience altered senses. And then, just as they discover the destination Scarlett has been seeking for so long, caves collapse and injure some party members, leaving them no choice but to push on and on, deeper and deeper into the darkness, in order to find any remote possibility of escape.

The script written by Dowdle and his brother Drew is a neatly woven package of ideas that borrow elements from a variety of notable sources, including “The Descent,” “The Exorcist” and, to a more eccentric degree, “National Treasure” and “The Mummy.” But there are no groans of displeasure or dismissals on our minds through much of the running time. We accept this formula as we must. That’s because both writers are completely engrossed by the possibilities of this premise, and yet somehow avoid the temptation to ramp it all up into excessive visualizations of violence or mayhem. That which is the most frightening in a movie like this is what we don’t see, or what we may only have a slight assurance of. Maybe that is no easy feat in a movie that has the audacity to provide cameras to each of the six lead characters (each of whom have them perched atop headlamps for good measure), but it is a challenge they accept with skillful precision. A great many moments of terror occur in “As Above, So Below,” but they do so long after the underlying dread has saturated our observations, and that gives the more visual jolts an edge of genuine shock value.

Eventually this will lead the survivors into a cave system that contains an ominous inscription warning of greater nightmares: “Abandon all hope, ye who enter here.” If it is, indeed, the entrance to hell, then Dowdle finds one that is as strange as it is menacing: a dark group of corridors filled with moving shadows, distant growls and horrific stone faces jutting out from narrow walls, which leap to life just as the fright of the onlookers bubbles over. I won’t bother trivializing the purpose of this description by revealing how it all turns out in the end, but sufficed to say there is some level of creativity in the resolution. Even my expectations were surmounted by some level of ingenuity. What that suggests is that as we descend farther into the bloody maw that manufactures these sorts of films, eventually they have the possibility of coming into the possession of directors that have a vision beyond spit and polish of a technical device. I have seen dozens of these “queasy-cam” vehicles in my 18 years as a writer of film, and so few of them ever surpass the limitations of their technique. This is one that carves out a spot in the upper tiers.