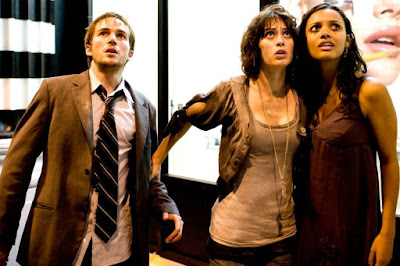 Consider the identity of the primary witness in first-person horror films. When a handheld recording device winds up in the hands of any unfortunate onlooker during a random catastrophe, it becomes just as much a lifeline as it does a record of truth. Perhaps something about the existence of an instrument of documentation provides the advantage of personal security; for the victims, often perplexed beyond coherence, a barrier between themselves and the action can be empowering to their fragile sense of perspective, creating an illusion of endurance that inspires them to capture and preserve all the mayhem occurring around them. Because the underlying rules also suggest that such a position in a tragic event must also mean they can be spared from the inevitability of death, the lens seemingly drives them to look far deeper into the conflict than any innocent bystander might be willing to do. Because after all, when the chips are down and everyone around is caught in the snare of great pain and suffering, who else is going to make it out alive to tell the story besides the one carrying around the most detailed personal evidence?

So goes the prominent sentiment that has driven such victims in the never-ending machine of “found footage” sub-genre pictures, a concept that was developed and popularized two decades ago when the obligatory movie formulas were in desperate need of new energy. Not many of them have risen to the notoriety of “The Blair Witch Project” or “Quarantine,” but the most ambitious – and certainly the most rousing – remains “Cloverfield,” about six young faces that get caught in the strange quagmire of a giant monster destroying the streets of Manhattan on the night of an important party. It is a premise straight out of the pages of “Godzilla” mythology, but under the watchful eyes of J.J. Abrams and his director Matt Reeves, some ingenious things transpire in these frames – not the least of which is the perceptive acknowledgment that the characters are fleshed out participants in the mayhem, not merely disposable vessels designed to stand in all the right places when buildings come crashing down.

The story deals primarily with the lives of two young lovers: Rob (Michael Stahl-David), an ambitious professional who has just accepted a job in Japan, and Beth (Odette Yustman), his childhood sweetheart, who smiles endlessly and flashes adoring eyes. In the early scenes they are shown engaging one another with romantic platitudes while venturing off for a day of fun at Coney Island, but a month later, when Rob’s brother Jason (Mike Vogel) accidentally tapes over most of their footage on the night of his going-away celebration, it shows the two at odds with his professional success: he uncertain of where it leaves their blossoming romance, and she reluctantly trying to move on, which results in an awkward scene where she brings a new love interest into his party.

One of the more notable qualities of the film comes down to its perceptive consideration of the events leading up the nightmare. It doesn’t rush through the drama of the characters. It observes. As Rob and Beth must dance around the strange fate befalling their crumbling romance, others take notice of the situation as loyal coordinators of advice and empathy. As the little brother who must prod for reaction, Jason’s words are less about encouragement and more about sobering awareness: “I love you, but you’re kind of a douchebag.” Jason’s girlfriend Lily (Jessica Lucas), meanwhile, takes the balanced approach of keeping Rob’s nosy friends in line, especially Hud (T.J. Miller), the cameraman, who intercuts filming goodbye messages from the party guests with moments where he is spreading gossip about Rob and Beth sleeping together. That he is the key component in maintaining some level of sarcastic observation throughout the movie is not a detail that is diminished in this story, and the movie even offers up Marlena (Lizzy Caplan), a friend of Lily’s, as a tag-along in order to fuel Hud’s own goofy interests.

Then, as the party rages on in a whirlwind of conflicting emotions, something strange goes down. The city shakes violently. Power flickers in and out. News reports suggest an earthquake, than report on the capsizing of an oil rig in New York harbor. When the party rushes to the top of the apartment building to scour the air, a skyscraper in the distance roars into an explosion, sending embers down nearby. And then, when everyone rushes down to the street level to flee whatever is happening, many of them are nearly crushed by an object being flung down the alley: the face of the Statue of Liberty, seemingly ripped from its foundation. The movie unleashes these events in a torrent of rapid urgency but doesn’t stop to offer explanations, which is a sound impulse; it only ramps up the anxiety of the characters, serving to fuel our curiosity in wondering what exactly is causing this sort of havoc, and so seemingly out of nowhere.

The movie’s brief glimpses of the monster show a strange, lanky creature rampaging down the streets of Manhattan with no sense of limits. Where did it come from? How did it get there? There is no time to contemplate the possibilities – only enough, it seems, for everyone involved to make a mad dash to safety, which includes a rousing scene where thousands of citizens fleeing on the Brooklyn bridge encounter the beast as he collapses it. Later, as the survivors of Rob’s party attempt to think of alternate routes, an ominous call from Beth arrives: she is trapped in her apartment in a high-rise near Columbus Circle, which prompts him to go off and rescue her while the city around him is flattened into rubble. Love can make fools of even the most sensible, but Rob’s excursion prompts added tension for the film to capitalize on – at first in a scene where he and his friends decide to travel in the subway tunnels while a parasitic gathering of alien-like creatures stalks them, and then later when they all must scale Beth’s crumbling building, which already rests half-collapsed on a nearby tower.

There’s something cheerful about such a draconian context. Despite the film’s necessity to drag the audience through a maddening display of chases, destruction, uncertain outcomes and hysterical characters wondering how the hell it all started, we smile at the sheer audacity of the execution. While the screenplay by Drew Goddard demands little other than actors to react just as real people must in such situations, the special effects are of top-notch quality, especially for such a simple technique; who else but Abrams would insist visual values be so impeccable when the camera must be in constant non-stop motion? The possibility of a final explanation is never offered, but there is no need for one. It’s about the wonder of the moment, about the immensity of the conflict and how it drives people to do anything to survive, even if it means trekking all the way through the inferno to save the one that you love. Many will dismiss that as a retread of every cliché ever contained in a movie of this vein, but I embrace it. Think about it: when did you last see it all packaged this way, and so neatly in the framework of such a knee-jerk concept? To see these moments come to life in a scenario that seems as real as its camera insists is refreshing, especially in a time when the idea of this much action lacks edge. “Cloverfield” jolts the concept back to amusing life.