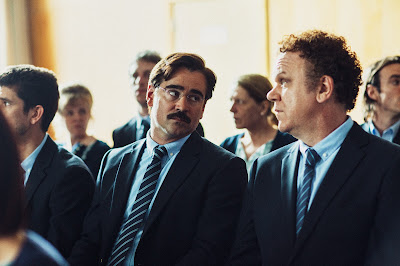 There are two ways that viewers can approach “The Lobster” – either as a facetious dark romantic comedy, or as a metaphor about the decay of civilization. For those trained to think more about surface objectives – certainly the most direct path for rousing curiosity – it is the kind of endeavor that may easily alienate one’s simple desires for payoffs and escapism; the premise is a defiant opposition to decipherable cinematic logic, seemingly drawn out of quirks and movements that would suggest insanity in most traditional undertakings. That others would never be able to find the material funny, furthermore, is certainly the most minor of its potential offenses; so abstract is this universe of paradoxical impulses that one is never privy to understanding the rules, even apart from the obligatory misfortune that follows people as they attempt to find (or rebel from) companionship. Yet for anyone well-versed in the more defining tendencies of the early movie auteurs, there is an ability to go subterranean with this kind of experiment. For all the talk of how traditional values – like a story, characters and a climax – often mask the underlying psychology of intelligent filmmakers, rare is the moment when they step beyond their own irony in order lead us outside the sphere of traditional human psychology.

For the first twenty minutes of this strange puzzle of a picture, I occupied space in the first tier. The early scenes show a pathetic figure named David (Colin Farrell) hazily stumbling through a world that seems blurred to nonsense; wounded by the loss of a wife who has left him, he checks into a hotel (or is he forced there?) in which patrons are given 45 days to recover from their breakup in order to find new potential life mates. The alternative: at the end of the tenure, if they have not been successfully integrated back into mainstream society as part of a couple, they are forced to, literally, transform into animals (wisely, the movie refuses to show us the procedure). A lifeless female manager plows through all of the strange pleasantries of his arrival and then asks the integral question: “if you fail, what animal would you like to be?” His response: a lobster. Why not something more practical? To him, the Lobster possesses qualities that appeal to his underlying nature, not the least of which is the creature’s ability to remain fertile for its entire life, frequently seen as the common pipe dream of man.

So far, we can accept that. Then there are interactions with peers in the hotel that underline the discomfort of the experiment. He befriends, mostly out of mutual boredom, two gentlemen (played by Ben Whishaw and John C. Reilly) whose most distinguishing traits are physical ailments: one of them limps from an old injury at a zoo, and the other stutters uncontrollably. The movie never refers to any of them by first names. Then there are cuts to group gatherings in which the solo residents are put in front of a microphone to relay their personal histories as a way of motivating their peers; they play like those really bad testimonials in infomercials that paint portraits of doom if you are to overlook buying the product. Group celebrations commence. David attempts to engage with a woman with a stern demeanor (Angeliki Papoulia) and finds she has no warmth, leading him to accept a dance with another whose nose bleeds without warning. Their slow and sterile progressions with one another become almost insufferably unwatchable; as we observe, our wonder is displaced by an overreaching sense of cynicism that teeters dangerously on the line separating patience from outright rejection.

How did that change? A key scene involving the “hunt,” as it is described, serves as the primary catalyst: the portal from which some minds escape the embrace of a dreary yarn about the confusion of potential lovers and drop into the thicket of stimulating political metaphors. The scene involves all of the single residents of the hotel wandering into the woods and shooting tranquilizers at escapees from their program; for each one they catch, another day is added to that person’s stay in the facility, helping their odds at persevering. The solution is buried not in the details but in their technical composition. Director Yorgos Lanthimos doesn’t show the events in a conventional arrangement but instead dresses them up in satirical visual cues: slow motion, broad camera angles and cheerful music, all of which act as mocking dismissals of the very fabric of this existence. The savageness of that conviction is so prevalent that it echoes the deafening quality of the famous traffic sequence in Jean-Luc Goddard’s “Weekend,” in which a long and paralyzing shot of a row of cars ends with the ambivalent reveal of severed bodies lying next to the highway.

In dropping Goddard’s name as a reference point for Lanthimos’ creative dexterity, am I overstating comparisons? I don’t think so. Though the great director’s value as an architect of French New Wave is not in sync with many of the current mainstream trends, his gusto lives on in the hearts of those who thrive on resistance. General audiences, no doubt, may come to see him as a footnote in their frustration of subversive narrative standards; more inclined to accept films that have beginnings, middles and ends, his nature to use a premise as a tool to escalate urgent social agendas is no longer favored in the era of literal interpretation. But “The Lobster” echoes his panache so vividly (and so directly) that one can’t help but draw distinct comparisons, especially in the static of the relaxed moments. Sure, there is a story here that can be absorbed at face value, and yes there are characters we follow from beginning to end in their travels through bizarre monotony. But to consider them in straightforward fashion is to be frozen by the eccentric delivery of the material, which can get tiring by itself. Between the lines is where the movie comes the most alive: in those scenes where the aesthetic deals with jarring contradictions, or in the silent patches where the faces of the actors seem to be meeting the gaze of a more penetrating cause than just mere comedy or drama.

What exactly is that purpose? The movie provides some elbow room for debate. The screenplay by Lanthimos and Efthymis Filippou is a work of deep originality with a certain dexterity for thematic richness, especially when it comes to analyzing how human relationships are built. If the point is to mock the extremes, then the character of David represents the powerful opposing magnet. Consider his scenes in the hotel; here is a man who wanders aimlessly through his stay like a detached projection of himself, and there are no desires or inclinations to move beyond the act of his own loneliness. Towards the middle of that endeavor, there is actually an attempt to follow the assignment; he decides to try and find companionship with the heartless woman at the singles dance, which leads to uncomfortable sex scenes, passive abuse and even a tragic test to see if he is faking cruelty. That also forces him to flee the resort as a means of escaping control; unfortunately, when he wanders into a group of rebels stationed in the woods beyond the hotel, he discovers that any flirtatious interaction between others is grounds for death or dismemberment – the opposite extreme of his previous supervisors.

Of course this reality will provide its own series of obstacles as he interacts with an attractive woman (Rachel Weisz) romantically, and of course there are circumstances that must lead them both down a road where their attraction is challenged even further by the nature of the outside world’s expectations. The sentiment of this story arc is direct and poignant: in whatever scenario you fall, hearts cannot be controlled by the expectations of a governing body. But I think that’s ultimately the minor point in Lanthimos’ film. This is a world where the systems are in place because the whole of humanity has accepted them without hesitation. Is it at all strange that the eyes of the residents of the singles hotel look so dead? Or that some are desperate enough to feign personality traits to actually find passable life mates – or worse yet, threaten suicide if they lose out? The illogical rules we impose on a people are destined to cause the undermining of their very nature, in turn disrupting the spiritual health of our collective reasoning. “The Lobster” is the embodiment of that realization, a brilliant and methodical consideration of strange cultural standards as they are practiced to the desensitizing peak of lunacy.

I enjoyed this movie. I had to see it a second time to pick up things I missed in my first viewing. A lot of it is open to the viewer own imagination, like the opening scene and closing scene. Seeing it a second time brought up other questions and inconsistencies.

The two scenes I like the most were the one where one of the guest who was at the hotel shows up later in the background of the woods and the scene where they raid the hotel. Won't give that one away, but it makes perfect sense in the end.

I would correct you on one of the things you said in your review. The two other men did have names. The one that limped was named John. The one with the lisp name was Robert. I kept trying to read the name tags, but wasn't able to catch their names.

A couple of other things. I couldn't decide if they went there on their own or if the were forced to go. I went with went on his own. I also wasn't sure what the punishment was if you were single in the city, and how long you had to find someone before that punishment.

After watching it twice I still couldn't pick up what his reason was for not wanting to go on a walk the butter cookie woman.