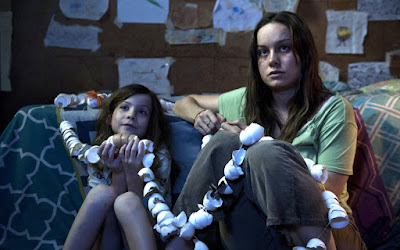 A child’s imagination is not contingent on the closed walls of his reality. Adults that inhibit their growth are a curse to the endurance of a culture. Assuming that these sorts of insights were not already persistent in the mind of director Lenny Abrahamson when he made the difficult “Room,” what else would have been the driving influence of such an unpleasant story arc about a mother and child and their horrific imprisonment? The very thought of this premise makes the hair on the back of our necks stand at attention. And yet the wounding degree of the dramatic charge calls to mind an honor roll of stirring human stories that deal with troubling scenarios at the eruption of their conflicts. “Boys Don’t Cry.” “Monster’s Ball.” “Dancer in the Dark.” “Precious.” Such movies were not made great simply by the acknowledgment of their painful situations; they rose to prominence because their directors and actors swam the depths of their emotional causes, and emerged as voices in the wilderness of genuine human suffering. Here is a movie so overwhelming in its conviction that it’s a wonder the two lead stars, Brie Larson and Jacob Tremblay, are able to wander through the material with such firm dedication. But they do, and their resonating endeavors concluded with a rigid movie buff walking away from the experience with tears rolling down his face.

“Room” could have easily been about more coarse interests, mind you. The platform on which the story is developed originates from a germ that offers more sensational slants: a man (a predator, really) tricks a teenage girl into helping him with his injured dog, attacks and drugs her and then keeps her confined in his backyard shed, where he proceeds to consistently rape and (eventually) impregnate her. The movie is not about his awful indecency but about the consequences of it: for the whole duration we observe this girl, now a sad young woman, as she becomes a steadfast voice of optimism for the sake of Jack (Tremblay), her five-year old son who was born in the shed and has never been beyond its walls. He also knows nothing of his own origins, even less about how his mother came to be a prisoner of the “room.” When “Old Nick” – their keeper, in his mind – comes for nightly visits to lay with her, he is forced to remain silent and asleep in a nearby closet; it is important for her to keep as much separation between them as possible, lest his innocence be tarnished by the knowledge of his terrible father being their cruel prison warden.

Daily rituals pass their time with minimal consequence. There are baths, fits of laughter, gatherings at a small table to disperse food portions, and conversations about the people who live inside the television set. They share bedtime, wondering about an existence beyond the skylight. The day of his fifth birthday triggers new activities, including the creation of his very first birthday cake; when it arrives on the table without candles, he is surly because it does not resemble those from TV. His patient but restless mother is quick to stifle that anger with truth (“Old Nick won’t let us have candles”) but recoils when he is reduced to tears. Is she intentionally placing limitations on him, he wonders? How can he possibly know what she would do for him? Or how difficult it is for her to be a loving example when everything she knows is self-taught in a habitat of restrictions? His confusion is obligatory but can’t accurately be lifted by mere descriptions of the outside world, and when there is an attempt made in a later scene to explain their situation, the simplicity of his being forces equal amounts of anger and resentment – tangents that we sense are obligatory in this scenario.

The movie regards many of these details from the Jack’s perspective. He is a hyperactive dreamer whose colorful stories recall the potent eccentricity of Hushpuppy’s narration from “Beasts of the Southern Wild,” another film about a young optimist born into a harrowing void. While the world that surrounds him exhibits a bleak trend impossible to keep at bay, his youthful metaphors are meant to alter the course of our fatalistic observations; because they are so strong-willed and bright, they serves as momentary encouragement, a hope for something better and more fantastical. Then there is a plot development in which Jack wanders too close to Nick, forcing his mother (Larson) to react violently. Nick retaliates by cutting their electricity. Deliveries of food and supplies cease. Seeing no end to her own suffering or the preservation of his purity, she concocts a plot in which to suggest Jack died of a fever, allowing him to stow away in a rolled up carpet while Nick drives off to dispose of the body (the mother and child rehearse this escape plan ad nauseam). During a pivotal stop, Jack is able flee the truck bed and stumbles tensely into the path of a concerned stranger. As the narrative illustrates these events in a moment of horrifying tension, the camera emphasizes his delirium in a technique of swerving motion and disorienting angles; it is the first time the boy has ever seen the world beyond a skylight and a small television set.

For many, the wonder of Jack’s breakthrough is reflected in the observations of an almost mystified audience. Authored by newcomer Emma Donoghue (who also penned the book the material is adapted from), this story not merely heartbreaking but purely unique, committed to a premise that is not content to merely parade through the motions of a traditional story arc on its way to a clear-cut ending. There is no truth in that approach. Though their prison in “room” ends as abruptly as the reality is established, that only feeds the incentive of Abrahamson’s direction: he sees the struggle as great in the outside world, where life has continued to move without them. Though the young mother’s integration back into her old life comes at the cost of often loud and painful verbal confrontations with loved ones (including now-divorced parents played by Joan Allen and William H. Macy), young Jack is seemingly paralyzed into silence by the transition. It leads him to shock, awe, pathos and even regret. There are conversations where he expresses a desire to return to the room, suggesting the impossibility of his assimilation. Later, when his mother has a near-devastating emotional breakdown and is whisked off screen, it forces him to shyly interact with a grandmother of uncertain motives; her interests seem to be just as much about familial compassion as they are about the horrific realization that he is the living symbol of a seven-year nightmare.

There are no easy roads for the movie to take, and yet almost no detail is done without some level of deep resonant feeling. The performances by Larson and Tremblay drip with conviction but are not pitched on the same playing field of any mere equal; they are decidedly method when others would simply be projections of skill or effort (Larson herself prepared for the role by removing herself from human interaction for several weeks as a means of relating to the trauma of her character). Certainly the complexity of their interactions are amplified by the painful duality of their reality, but how was it possible for such a young and impressionable face like Tremblay’s up for such a strange challenge? The depth and degree of his portrayal suggests no artifice; it’s as if he has been coerced into an unending cycle of play-acting, unable to turn his emotions off or flinch from the conflict. In a world where we frequently hold young actors to a slack standard in contrast to their older counterparts, here is a young man that has no qualms about altering the course of our perceptions. He is just as serious and mature about the undertaking as any adult well-versed in dramatization would be.

There may be two audiences who are meant to discover “Room”: those that are tugged by a heart that bleeds sympathy, and those that are mystified by the strange moral ramifications of gray areas. Both of them have a place in the cold embrace of the film, surely because Abrahamson makes it so. He has an astute skill for observing through silence while his actors reach realizations through dialogue on the outside of the facts. Given the difficult and foreign nature of the conflict, that is necessary. A more direct confrontation of these details might have ended in a ham-handed delivery of the scenes, or at least the restriction of subtle cues. But the heart of the movie ultimately comes down to relationships and what gives them relevance: not the source of how they are created but in how they are necessitated by the commonalities of fear and sadness. Young Jack is a product of rape and endures as an almost nagging reminder of the seven years his mother lost as a captive of a sick man. But without him, how would her soul have been able to persist long enough to reach liberation? He gave her a reason to fight, to continue the search for a means to freedom. There is never an easy answer in a world content to consume simple people, but never do the answers lie in the acceptance of shame and regret. As movie dramas cycle through a rolodex of formulas and clichés to find their necessary pitches in the modern era, “Room” is destined to be a defiant assertion. To call the movie one of the great human achievements of recent cinema does not begin to describe the power that lives within its gripping frames.