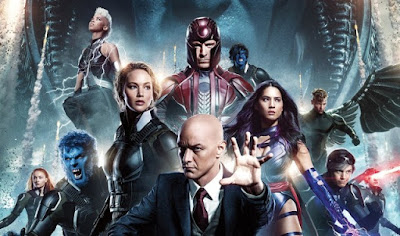 There’s a sly exchange between characters in “X-Men: Apocalypse” that confronts the preconceived attitude of filmgoers at action movies: specifically, that third chapters in trilogies are usually the worst when it comes to offering a thorough payoff. This morsel of wisdom is uttered during a very quick scene showing a handful of young mutants exchanging conflicting opinions as they leave a movie theater showing “Return of the Jedi,” the third “Star Wars” film; when one immediately speaks up in protest of those notorious third chapters, all those present nod in collective agreement. And if that’s as widely accepted as an attitude in this climate as it is with mere characters, then it is no wonder Bryan Singer, the loyal filmmaker behind many of the better “X-Men” movies, integrated this morsel: after the failure of so many other pictures in many of these comic book series (including the last “X” story arc, which ended with the awful “The Last Stand”), this is a director fully aware of the destinies that await lengthy film excursions. Certainly a handful in the audience might find some cruel irony in that sentiment as “Apocalypse” – also a third film in a series – thoroughly disinterests them, but those are the ones looking in from an unreasonable context. This is in no way the ambitious or intricate achievement that “Days of Future Past” was, nor does it aim to conquer the most zealous narrative summit. But what it lacks in the pitch of liveliness it more than makes up for in character exposition and effective trickles of story progression.

Seldom is such a feat achievable when one is dealing with plots of apocalyptic nature, much less later movies in a series. The prologue emphasizes those daunting responsibilities thoroughly, showing a world thousands of years ago when a godlike figure – maybe human, maybe otherwise – is paraded into a temple and placed at the center of an elaborate ritual. The cause: this being, known simply as “Apocalypse” (Oscar Isaac), has mastered the profound ability of transference, allowing him to jump from one body to the next as a means of preserving an unspoken sense of immortality. The added benefit is that his movement between vessels of flesh also allows him to absorb the abilities and experiences of others, and a small faction of dissenting followers so fears this prospect that it inspires them to an uprising just as the ritual is underway. That inspires an elaborate battle in the ruins of a crumbling pyramid between them and agents of Apocalypse – aptly known as the four horsemen – before their deity is buried beneath thousands of pounds of brick and mortar, presumably caught in slumber rather than death in order to propel the story arc of the movie to follow.

Thousands of years later, the obligatory discovery of his tomb corresponds to the rapid emergence of beings known as mutants, who have emerged in mainstream society (“X-Men: First Class”) and even caused panic in the streets by acting out against would-be oppressors (“Days of Future Past”). Now they are caught in that volatile predicament of uneasy tolerance; many world governments do not go out of their way to antagonize their kind, while many prominent ones have removed themselves from public life to avoid inevitable discord. The logistics of the scenario also create obligatory adverse situations for less peaceful cultures, including underground fighting rings in which mutants are pitted against each other for money. That doesn’t exactly sit well with Mystique (Jennifer Lawrence), one of the more activism-driven characters in this story, and there is a scene where she frees a German mutant with a skill at teleportation – perhaps, among other hidden reasons, because he also appears in mutant form as a blue furry beast.

The movie occupies these situations with the creation of familiar relationships. Though his prized X-Men alliance has been disbanded to ward off concerns from the government, Charles Xavier (James McAvoy) continues his tireless crusade to turn his mansion into a haven for new or confused mutants in search of guidance. Key new arrivals come in the form of Nightcrawler (Kodi Smit-McPhee), the aforementioned German, and Scott Summers (Tye Sheridan), whose eyes recently became outlets for powerful beams of energy. Young and impressionable, their sensibilities are rough outlines of what once was Xavier’s original class of students; they exemplify awe for the veterans but have yet to grasp their sense of maturity, which leads to a plethora of arguments, fights and narrow escapes while the outside world builds to a bleak reality. Meanwhile, Erik Lehnsherr (Michael Fassbender) makes an ill-fated attempt to integrate back into mainstream society after several bouts of very public mayhem but is unable to stifle his incredible gifts; this paves the way for a disastrous snap from reality just as Apocalypse – newly awakened – has come to acquire the talents of the famed Magneto, who is destined to become one of his four new horsemen.

Those well-versed in the mythology of the X universe (of which I have a fair amount of my own knowledge) know exactly where this concept is going, but Singer and his writers do a respectable job at keeping the journey interesting. Because Apocalypse charges himself with carrying out the routine of cleansing the world of inferiors (hence the nihilistic name), he sees his own return as salvation for mutants, all of whom are blindly following “false leaders” and senseless bodies of government when they should be inheriting the Earth. His endeavors, of course, act as an ideological divide between those who believe in Xavier’s teachings and those made cynical by individual traumas, and that forces the screenplay to coerce two opposing factions into a flashy confrontation just as Apocalypse delivers his message of destruction to worldwide awareness. In exemplifying the detached superiority of his character, Oscar Isaac a proper cast in this role; underneath mounds of thick makeup and prosthetics he is able to convey the depth of arrogance of the villain, all without the necessity to ham up tense sequences in useless emotion or outburst. Could any actor have done that just as effectively, especially considering how unrecognizable anyone would have been underneath such an elaborate exterior? When you’re in a movie about the X-Men, one wagers it to be a heavy temptation to overplay the pomp and circumstance of a villain. By playing against that urge, Isaac reminds us that he is an actor in favor of temperament rather than showmanship.

By the same token, the time devoted to the mutants and their volatile interactions (well-acted as they are) does limit the opportunities we get in seeing them do battle with one another. The “X-Men” stories have ranged from silly to elaborate in comic books for over fifty years, but the dependable gimmick that continues to draw readers is certainly more superficial: everyone gets a chance to see an ensemble of misfits show off their often colorful powers and abilities. But very little of that is going on in this film; it’s as if Singer is purposely holding back the initiative of the premise, perhaps because of ongoing concerns that such an inconsistent franchise could implode on itself if left managed by the wild initiative of visual effects artists. Would that be a bad thing, though? When one is dealing with a story about a villain set on the path of outright human extinction, hasn’t the premise already bitten off far more than it can chew? If there is a distinct downside to his cautious intentions, it’s that the movie ends on a note that is decidedly anti-climactic: the characters gather, exchange projectiles and argumentative soundbites, are encouraged to go off the rails and then… that’s it?

But those are not sacrifices made in spite of what exists on screen already. The movie looks great and has a good sense of pacing. The characters are not reduced to blurs in a crowd of confusion; they have full-fledged personalities and persist beyond the distinction of their abilities. I also admired how the screenplay handled the subplot involving Magneto before he is tasked with joining the ranks of the enemy; his endeavors are a plausible facet of a personality alienated from mainstream society, and there is a genuine sense that the story cares about the outcome of his seclusion, however morose. A great many others will scoff at these endorsements, no doubt because they don’t fit into the image of what another “X-Men” movie ought to be selling. Those are the people I would immediately ask to answer this question: when taking both “Apocalypse” and “The Last Stand” into a collective realization, would you rather be dealing with a movie that holds back a little, or one that surrenders to nonsense and anarchy?