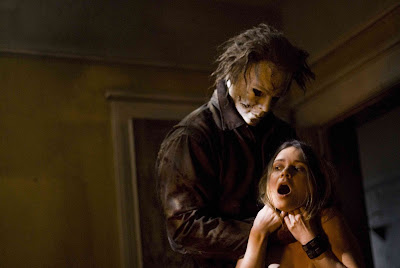 Masks are an integral device for the characters in Rob Zombie’s films, a tool that allows their dark agendas to manifest in the comfort of an elaborate masquerade. They seem to be, to them, a protection ward of sorts: to possess one implies that a victim may never be able to connect with the face of the person harming them, an essential function of holding power in a moment of violent aggression. A more revealing display would undermine the point of the pain they inflict. This is not elusive wisdom to any filmmaker that has ever overseen a vehicle involving murderous maniacs who wear such disguises, mind you, but almost always they were simply a ruse to keep audiences from discovering the identity (or at least the face, usually disfigured) of the culprit. But as we gradually move our way through the career of one of the more notable horror film impresarios of the 21st century, deeper reasons behind the implication are now at the forefront of discussion, and the line separating a dependable gimmick from its underlying psychology is gradually fading into the reveries of the past. Now it is hard to watch any film about such villains without instantly thinking of how thoroughly the façade unleashes a beast rather than hides it.

By the same token, the past deeds of others reverberate through the influence of these modern considerations. Consider Michael Meyers, probably the most famous of the masked killers of horror films: once a simple kid who became deranged while hiding behind a Halloween costume, he grew to become the most fearsome of serial offenders, a man whose motives were never clear but were always driven by the shadows he haunted. Zombie no doubt felt some subterranean connection to John Carpenter’s legendary persona, otherwise he might never have come to see the possibility of a remake as tangible. But he did, perhaps, when so few would have cared enough about the legend to find deeper meaning within it. As such, his version of “Halloween” isn’t so much of a direct retread as it is a psychological retooling, less interested in the murder (of which there is still an abundant supply) and more motivated by the strange allure of its young maniac, a 10-year old boy who stares back at others with a snarl of resentment and eyes that seem eager to unleash unspeakable pain.

There are reasons he is the way he is, just as there are reasons why some souls are destined to become serial killers: they are usually traumatized at a young age by a vicious cycle of cruelty and abuse. Much of that is clear in the earliest scenes of Zombie’s opus, which transfers the audience back to Michael’s early years as an adolescent; the middle child in a household ruled by an absent mother and her mean-spirited boyfriend, he is frequently seen hiding behind a clown mask, his primary outlet of escape: the adult figures are usually insulting or threatening him, and his older sister (who theoretically should be his defender) is ambivalent of the hurt he goes through. No one, however, suspects there are darker emotions bubbling beneath his calm surface – not even when his mother Deborah (Sheri Moon Zombie) remarks how she is always replacing his rats, which apparently die alarmingly fast. Later, when he is bullied in the school bathroom by teenagers poking fun at his mother, she is dumbfounded when the school’s principal brings in a child psychologist to study Michael’s erratic behavior. What need is there of it, she wonders? That detachment is contrasted earnestly in the following scenes, where Michael confronts one of the bullies in a park beats him to death.

The monster within rises to the surface swiftly and aggressively, leading to a first act so filled with relentless violence that it is a wonder any filmmaker (including Zombie) could rationalize it. But his is a perspective that isn’t diminished by the usual transparency of a slasher film; the camera looks to young Michael as an object to be feared, a child that is built on many of the classic case scenarios that mold the world’s most fearsome homicidal maniacs. The entire first hour plays like an investigative study of this notion; after Michael’s snap and eventual legal prosecution, he is placed in a mental institute in order to be studied (certainly not rehabilitated) by Dr. Samuel Loomis, who comes to regard his young patient as a mind incapable of seeing reason. Loomis, once played by Donald Pleasance, is assumed in this version by the wonderful Malcolm McDowell, who must have certainly felt twinges of unlikely nostalgia – as he pokes and prods silent Michael during therapy sessions in dead spaces of an overly-lit asylum room, did he sense the irony of it all, essentially standing in the opposite role of his devious character in “A Clockwork Orange?”

The long discussions between Loomis, Michael, his distraught mother and even legal officials are, needless to say, mere platforms for what is about to transpire: as an adult, it is destiny that Myers is to escape from his cell and wander back into civilization in order to return to the sight of his first murders, where history must undoubtedly repeat itself. But if this newer version of the plot earns credibility in fans of the original, it’s because the approach is so refreshingly cautious. It doesn’t rush right to the mayhem. It stands back, contemplates, and gives us a perspective of young Michael that considers this identity and what went into creating it. The man behind the mask wasn’t lurking in the dark just because he felt inclined to slaughter; he was doing it because it gave him a release from the throngs of a harrowing youth. Though little of that was dealt with implicitly in Carpenter’s version – which was much more concerned about the orchestration of a murderous impulse – it certainly did not diminish the power of his endeavors. Yet we charge remakes for doing something different, if they are to exist at all. Most filmmakers would simply rehash that vision and amp up the visual assault for the sake of stirring the minds of desensitized viewers; Zombie is brave enough to depart from the source and take insightful back roads that consider the psychology of the subject rather than just the literal manifestation of his anger.

That he also acquires performances of deadpan conviction certainly anchors the sentiment. Young Daeg Faerch has a rare opportunity to replace the youthful ignorance of a boy with some level of nightmarish insight, and doesn’t disappoint – his relationship with the characters and the camera is unsettled by gazes rather than words, devious looks rather than explanations. In some instances, he does nothing but simply stare back at the adult figures with bloodcurdling precision, which is key: those who love him must not recognize this as anything other than momentary anger, lest their peaceful image of young Michael is tarnished by the pain he freely inflicts. Likewise, Sheri Moon Zombie – the director’s own wife and frequent collaborator – faces the challenge of balancing love with underlying fear, and never wavers. It is never in doubt that any of those involved in this terrible case don’t buy into the logistics of the material, nor is it a question that those who are destined to be his victims are acting out just for the sake of ham-handing a psychotic delivery.

Naturally, Zombie fills this realization with a plethora of humorous nods to the culture he dabbles in, including the casting of Dee Wallace (a famous heroine of horror films from the 80s) as the adoptive mother of Michael’s living sister. There are also some shots in the last act that are directly lifted from the source, including two or three moments when Michael is seen stalking others in the same neighborhood that was used in the original film. And, of course, he is not shy about using Carpenter’s famous musical score to his advantage either, as if to echo the master’s devious intents without burying them in the fabric of a thoroughly altered vision. The one significant drawback comes down to a detail in the plot that I refused to buy: after Dr. Loomis decides to meet with a grown Michael – now totally mute – and bid him farewell, he returns to a normal life and proceeds to… write a sensational tell-all about the Myers case? Such a detail seems to play against the type of character McDowell creates, a man whose legitimate concern for this young boy becomes the sort of silent fear that he would never antagonize. There is a moment towards the end of the film when both doctor and murderer confront one another during one of his many attempted homicides, and Michael reacts swiftly and violently in a manner that some may not expect. Watching the scenes, one wonders if he managed to squeeze in some reading time before the confrontation ensued.