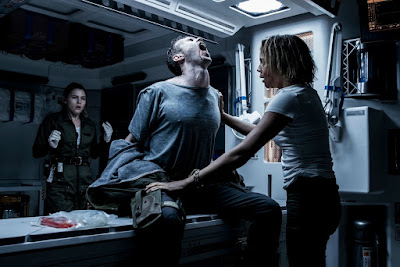 Added endeavors in the “Alien” franchise persist with this stalled thinking – including two terrible “Alien vs. Predator” films and a series of prequels helmed by Ridley Scott, the man who first brought the alien out of hiding. His latest, “Alien: Covenant,” contains the duality of a mystifying conundrum: its characters exemplify the lowest denominator of mental capacity, all while the film’s atmosphere pulsates with a fearsome quality. There are moments where our blood pumps rapidly through warmed veins, though there is little desire to see many of the characters live long enough to tell the tale of their violent misfortune. For a story this fatalistic, their existence serves only the purpose of moving the creature’s evolution towards a predestined climax, and they run and scream with all the stupidity of a row of ducks out of your conventional dead teenager shockfest. For some that might be a cliché too obvious to be seduced by the movie’s more probing qualities, but others – like myself – will simply accept the rituals as inevitable pastimes.

“Alien: Covenant” is a curious film, made with the wandering eye of a provocateur who descends deeply into an abyss only to find himself tethered by the narrowed vision of a movie studio more interested in formulas of the past. That must be a harsh reality to live in, especially if you’re as ambitious as Scott; despite the divisive nature of “Prometheus,” the picture that precedes this one, few could deny the sense of scope that seemed to reinvigorate the director’s sense of enthusiasm for the material. But Fox, fearing diminishing returns for a follow-up, felt the bridge connecting that film to the original “Alien” required more similarities with the franchise name value than with the meditative philosophy of the last endeavor, and a result emerges in which the mind and the eyes compete for stimulation. That doesn’t mean the movie is incapable of providing both, but by the end one is left to wonder, amid scenes of dubious retread, whether a filmmaker with no artistic constraints would have given us far more than just a few echoes of brilliance.

The first half of the picture suggests those possibilities with zeal. As a large vessel known as the Covenant glides into the frame, its inhabitants are violently awakened from hypersleep during a space storm, which damages the hull and results in the untimely demise of the ship’s captain (James Franco), who is burned alive in his sleep chamber. That forces the hand of his peers to elect Oram (Billy Crudup) to the leadership position, a distinction he quietly mulls with skepticism (“How can I get these people to trust me?”). His insecure nature is driven further by two important details: 1) the fact that the Covenant mission involves couples, meaning he has a partner to consider in every decision; and 2) his religious background is viewed with silent disdain by peers, many of whom have apparently abandoned the notion of faith in favor of a science that is constantly confronting them with hard truths.

The Covenant mission is a simple one: somewhere off in the distance of the universe, an inhabitable planet awaits the arrival a ship of would-be colonists, who will create a new civilization there and expand on the dreams of their ancestors. Guarded over by a passive android named Walter (Michael Fassbender), their lofty ambitions are thrust into uncertainty when their awakening also comes with other dubious news: distress signals from a nearby planet appear on radar, and this place appears to have all the necessary environmental qualities for habitation. That piques the curiosity of others, certainly, and Oram looks at it as a sign of divine intervention, leading the mission on a detour of what may potentially be a more efficient destination for their restless hearts. But if the first “Alien” film taught audiences anything significant, it’s that signals from unknown planets have more ominous possibilities than they let on. No one on board the ship realizes this until they land on a surface rich in human vegetation, where realizations are matched by ill-fated decisions that inspire all the obligatory screams and chases that are rites of passage in this series.

In some ways you come to expect that trajectory without reservation. The creatures at the heart of the “Alien” films remain fascinating as a device of terror even now, and this new story by Dante Harper and John Logan provides them with all the scenarios necessary of amplifying their deadly nature. Some, I would argue, are horrifying enough to compare to the best of the original film’s great scares, including one involving the live birth of a creature from a man’s spinal column. But one suspects it didn’t all begin as such, either, especially with some of the key revelations that populate the first act. Consider not the fact that aliens exist on this new planet and instead think of why David (also played by Fassbender), one of the lone survivors of “Prometheus,” would emerge from the shadows. How did he come to be there? What became of the ship he escaped on at the end of the prior film? And where is Shaw, he counterpart, who narrowly escaped the grasp of that strange race of Engineers before setting off with a singular agenda? “Covenant” deals with these questions with some level of meditative depth that I found greatly intriguing, even beyond the pulsating horror of creatures running through the tall grass searching for fresh blood.

The answers, I suspect, are too precious to reveal in a film review, but they nonetheless cement the wonder created by Scott’s first prequel – this is a universe which we have only begun to understand, and the uncertain discoveries along the way add a rich texture to the mythology of the famous movie creatures we frequently recoil from. Scott does not look askance at that possibility, either; these movies are not cheap renderings of their subject matter, and the screenplays regard the details with a sincerity of conviction that looks past the allure of overpowering self-parody. The dual performance by Fassbender here, furthermore, sits high above what you would come to expect of any picture in this sensationalist genre. The movie’s greatest moment involves not the aliens themselves but the two androids sharing a close exchange of education, as one tries to train the other on how to play the flute while the camera dances invasively between their focused profiles.

Alas, the final act displaces that momentum with twists, turns and developments that are only passable for their technical skill, clearly devised outside the cerebral mindset that populates the earlier half. The climax itself nearly replicates ae checklist of sensibilities contained in the final minutes of Cameron’s “Aliens,” further orchestrated by survivors we have no interest in beyond the plot’s necessity to have someone endure for future series continuity. Contrast that with the rather solid ensemble of “Prometheus” and you sense the divide in standard. As dimwitted as those characters were, they were at least perceptive enough to interlace their fates with sharp dialogue and serious considerations before they met with bloody ends. Those in “Covenant” are so stupid they dare not even consider the possibility of walking onto a foreign planet with some protective equipment, which might have at least shielded them from dangerous airborne pathogens.

What this suggests for the future of the franchise is anyone’s guess. Under the guidance of thinkers there remains a thoughtful mystery lurking under the surface here, with all the spirit and vigor of Dan O’Bannon’s founding visions. But there also exists a need – and even a value – for the more visceral nature of the aliens, who continue to find new and creative ways of leaping out of the shadows to devour those paralyzed by their ravenous presence. Both rewards exist for those choosing to occupy their time with “Alien: Covenant,” a film that balances both with impeccable production values. But one can’t help wonder if, at this point in time, the more restrained prospects of the former would have gone farther had they been more than a landing strip for the latter.