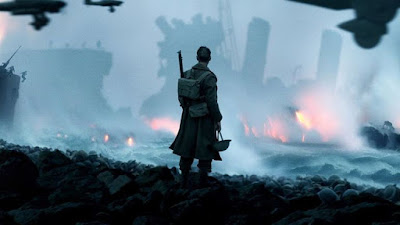 The opening shot sets a disquieting tone. A lone soldier (Fionn Whitehead) wanders aimlessly in a vacant coastal village and is suddenly startled by the sound of nearby artillery. Fleeing swiftly through the dusty streets, he crosses (almost accidentally) into friendly lines and onto the beach of Dunkirk, where endless rows of troops rest in discomfort. Their situation is made obvious by a general knowledge of the past; they are awaiting rescue from across the channel by the British navy while attempting to hold ground on a shoreline that is soon to be overrun by the powerful Nazi army. Not much of this is said, but the music by Hans Zimmer underlines their apparent predicament – a series of low and drab orchestral chords precede a varying degree of twists, including a repeating device in which the soldiers react to the sound of a plane overhead but cannot be sure whether it belongs to the side they fight for. Nolan matches Zimmer’s sonic rumbles with quick cuts between key faces of the brigade; their eyes indicate the sudden urgency of the moment, as if refusing to flinch until they can be certain of their (temporary) safety.

The movie is about survival in the thick of fatalist indications, and Nolan seeks primarily to understand the frenetic tension of the scenario from three key angles: on land, in the air and on the sea. The movie moves frequently between these three locales as story arcs build around them. The soldiers on the beach provide an umbrella context – and indeed, the pointed use of the lone soldier and a strange friend he makes (Aneurin Barnard) add a focus for the human interest – but it is in the two other stories where “Dunkirk” moves beyond straightforward retelling and embodies the meaning of its thesis. Consider, if you will, the launch point for the subplot on the water; after Churchill orders the use of civilian boats to rescue the stranded soldiers across the water, Mr. Dawson (Mark Rylance), the owner of one such vessel, decides to make the trip himself rather than hand the boat over to the navy, and he makes haste for the shores of Dunkirk with his son Peter (Tom Glynn-Carney) and the boy’s good friend George (Barry Keoghan) in town. A more literal or socially conscious movie might have asked pertinent questions: why would anyone take along innocent boys to face the potential horror of a war-torn beach? Isn’t there a moral obligation to encourage them to stay behind? Nolan does not waste time with such trivial matters; it is more important, in that moment, to use the situation given to the characters to magnify the experience they seem destined to have.

Almost inevitably, their slow trek across the turbulent waters of the channel lead them into the periphery of a stranded soldier (Cillian Murphy), whose fighter jet has been shot down over the open water. Shell shocked and barely audible, he is a man of broken spirit and uncertainty, which adds another layer of tension: when it becomes obvious where the boat is headed, his fear runs the risk of making him dangerous to the others. Meanwhile, three British jets near the site of the pending evacuation circle anxiously to keep enemy fire away from the ground troops, and two of them are shot down after an air attack by the Germans. This leaves a lone man in the air (Tom Hardy) to stave off the threat… and just as the gas meter in his jet stops working. Again, you are not exactly told all of this in dialogue or verbal observations – you pick up the truth based on how the photography cuts between critical moments (a shot of his face, then a shot of the meter, and then another of his face as his expression dissolves into concern). The development of our rattled nerves assist in a complex test of visceral responses, leading to a predicament on land where each attempt to endure almost always results in tremendous loss: a ship torpedoed by the Germans just as it is fleeing, soldiers hiding in the wreckage of a ship that begins to flood as enemy fire pierces holes through the hull, the mute soldier who may in fact not be a British ally, and so on.

A plot description could go farther, refer to the way things tie into one another and how Nolan weaves them through an elaborate prism of coincidence and strategy, but that does not serve the point of his intentions. He is not interested in piquing your need to understand details. What does matter to him, especially by the end, is how all of it made you feel. Were his sly cuts and frenetic bursts of action after long pauses of silence enough to put you into the moment? Does Zimmer’s score hit the right notes in amplifying the beat of your tense pulse? The movie is a triumph of technical skill that does far more than just establish a setting or emphasize an act. The refusal to write a script based specifically on pre-existing material was a wise gesture; it allowed its creator, I sense, to feel liberated from the associations of a precise narrative and hone in on the composition like a methodical provocateur. If there remain some misgivings on part of viewers who walked away from the experience at odds with his methods, then they approached the material wrong – they sought a straightforward history where they could formulate an accurate picture of the scenario as it played out.

I too began watching “Dunkirk” in that state of mind but was eventually hypnotized by the austere nature of the editing, the precision of the photography and the subtle haunting quality of the music; when combined they leave no doubt in our desire to abandon intellectual curiosity and be absorbed in the visceral nature of the images. If we care about the outcome, even knowing the facts, it’s because Nolan finds the chord in us that responds deeply to the endurance of good and strikes it precisely where it needs to be. How frequently have we been looked at as possessors of an intellect at the movies without any regard to our hearts or instincts? His chutzpah comes in the tradition of Sergei Eisenstein, whose silent masterpiece “Battleship Potemkin” seduced its viewers into believing all the events were transpiring without so much as a word of dialogue being used to hook them. Now, long after the possibility was seen and then reshaped by the hands of the greatest filmmakers, here is a director who has brought the concept into these simplified modern times and made it his own – and indeed, cemented his reputation as one of the greats of his generation in the process.