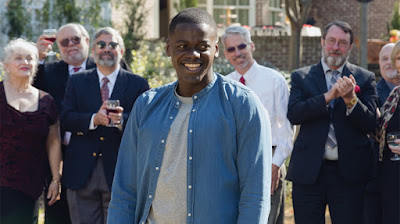 Those remain the first, last and ongoing thoughts in a movie that seemed to come out of nowhere, arrived at Sundance, astounded critics and audiences and endured powerfully enough in the periphery to be nominated for Best Picture a full year after its release. Seeing it again during a moment of resurging popularity, few can deny just how probing the endeavor is – a full testament not just to the insights of its activism, but to the skill and dedication of all those who are directly associated with it. Just as Peele looks deadpan at the material, so do his cinematographer, editor and talented ensemble of actors; they are not so much assembling as they are allowing themselves to be absorbed by this deeply troubling premise. No greater moment emphasizes this unison than during a critical twist in the first act, where Chris (Daniel Kaluuya) wanders downstairs one late night and comes into the company of his girlfriend’s mother (Catherine Keener), a hypnotist whose cordiality masks a terrifying motive. That the movie must visualize their exchange from Chris’ own eyes provides Peele and his technicians a novel way of dealing with the fallout – as he is reduced to tears following a childhood reveal, he is placed in a trance that literally sees his character plunged to the depths of a grim darkness, as if held back by psychological snares, while his body sits there in a semi-conscious daze.

Why is he being hypnotized? What are her motives? The movie keeps answers at a distance as he moves through a routine of social gatherings with wealthy white people, strange encounters with the glossy-eyed servants, and exchanges with a girlfriend who is convinced that he is creating unfounded suspicions in his overactive imagination. A lot of wide smiles and inquisitive stares are exchanged between the characters, but perceptive sorts will instantly see these as distractions; they all, in their own way, hiding their true natures while the audience becomes stranded in an elaborate maze of moral and biological mysteries. The key to the mystery (at least for Chris) is his peers; the housekeeper has two quiet moments with him that play up the silent horror behind her kind eyes, for instance. And then there is a strange moment when he allows the flash on his camera to go off at a lawn party, and one of the black neighbors (also mentally subjugated) bursts into a fit of panic and rage. Are they victims of hypnosis, just as Chris may come to be? If so, what purpose does it play in the privileged embrace of wealth?

The actors play up these notions with great nuance. Daniel Kaluuya is astonishing as the young man destined for danger and modulates effectively between all the right measures of joy, sorrow, shock and outright anger as the certainty of this mystery peels back. Also consider Bradley Whitford as the girlfriend’s father; he delivery is so understated that his dialogue seems painfully casual, such as when he attempts to earn Chris’ favor by confessing his admiration for Obama (“I would have voted for him a third time if I could!”). Keener, likewise, is effective at holding back the obvious cues; when she tells Chris of her professional background, neither he nor the audience suspects – at least initially – that her words foreshadow anything significant. In an ensemble of straightforward facades, in fact, only Caleb Landry Jones as the girlfriend’s brother suggests darker initiatives; there is an exchange between he and Chris where they seem to be dancing on the razor’s edge of their own courtesy, as if waiting for the moment when the other may slip up or descend into discomfort.

A lot of “Get Out” implores this method, perhaps, to amplify the shock of its eventual last act, when Chris attempts to get away after discovering, gradually, an agenda that will force him into a horrific mental slavery, powerless to affect the outcome. He arrives there with an equal measure of suspicion and humor, and that underlies a rare respect for the audience. Peele does not approach this material with the crushing weight of nihilism, nor does he devalue the thesis with endless sardonic distractions. Laughs come not from situations but from people reacting just as they must to deal with their realities (a close friend of Chris, who observes and investigates from a distance, is a key component of this alternating contrast). The central intent, I think, is to reflect the dual nature of our modern times, where most are quick to point out just how “non”-racist they are while simultaneously engaging in stereotypes, race jokes and knee-jerk assumptions when it comes to minorities. What Chris goes through throughout the course of this movie, therefore, is a microcosm of the social climate in a post-Obama era, in a country that likes to consider itself progressive for electing a black politician despite continuously gunning down unarmed black men and women at traffic stops.

Peele recognized this early enough to strike a relatively hot iron – his was a script devised in short order and shot in just 23 days on a shoestring budget, all before it became certain that Trump was on his way to the white house (fittingly, the film arrived just a few days shy of his inauguration). In those volatile days of post-production, however, a key decision haunted him: whether to include an ending that reflected the legal disadvantage of the times, or one where Chris is liberated from his damning situation. Sensing the audience’s need for positive outcomes, he opted for the latter; it was more important for his star to walk away from a nightmare rather than be swept up by it, as so many often do in horror movies. The original ending has its merits, but one can see why it was cast aside; it has such a fatalistic slant that to have included it would have stalled the momentum of the story. Real life offers fewer victories, of course, but a movie has just as much of a right to mobilize than to mimic. Think of what Wes Craven did in “The People Under the Stairs,” also about the horror inflicted on minorities, and ask whether it would have been as effective with a bleaker climax. Peele’s parting thought is not to insist that we are destined to be slaves to the narrow thinking of others, but that we have a responsibility to remain cautious and vocal until such ideas have been destroyed. “Get Out” is an urgent call to that necessity, and a profound one at that.