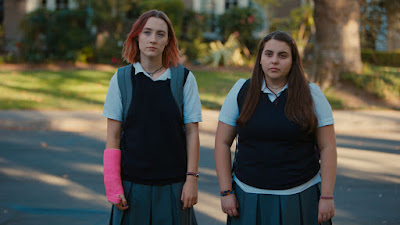 Director Greta Gerwig knows this is an essential chord to strike in any worthy coming-of-age story, and her sweet, charming “Lady Bird” is a love letter to the cinema of ambitious adolescents. Cast in the mold that gave birth to the great young heroes of Truffaut and Linklater, the eager protagonist comes to the center of these frames not just as an outsider seeking approval, but also as a strong-willed observer who must, at long last, stop resting in the sidelines and dampen her feet in the bog that is life experience. But what she endures there is not a conventional trek through a checklist of obligatory behavior tests, either; for every moment that comes rushing through her periphery, it is met with an astute blend of sarcasm and perspective. Joy, awkwardness, alienation and sensation – these are all facets of the miracle that is being. And always informing those choices, however nominal, is her conflicted relationship with her mother, who has one idea of what may bring her daughter happiness and yet, gosh darn it, finds it hard to see her child in a light that transcends her limitations.

The roles are played with a rich assurance by Saoirse Ronan and Laurie Metcalf, who take an otherwise orthodox exchange and amplify it. The scene is Sacramento, where Lady Bird (Ronan) has entered the final stretch of her public education, and outlooks for the future begin to take shape. Like most young faces eager for what lies ahead, however, her aspirations exist above the means of her family, who are struggling financially and rely on food stamps and trips to bargain clothing outlets to stay afloat. Marion accepts this reality not as a limit to overcome, but a restriction that all must abide by – including her ambitious daughter, who is seen as ungrateful and deluded for wanting to aim high in her education goals. Their differing perspectives fuel the underlying engine of their journey, right up to the important final scenes in which each arrives at a moment to make amends but discovers they might have shown up too late to make the impact.

In the meantime, Lady Bird occupies the screen with a headless optimism. When she is told by a counselor that her lack of extracurricular activities undermine her chances of getting into more prestigious colleges, it inspires her and her good friend Julie (Beanie Feldstein) to enroll in a local performance theater. It is there that she first meets Danny (Lucas Hedges), the young man destined to be her first boyfriend – they interact with that same sense of nervous flutter that is the staple of many a young movie romance, where each seems to skirt formal honesty for the sake of seeming hip or assured. Unfortunately, his interest proves to be dissonant when she inadvertently discovers him kissing another boy in a bathroom stall, leading to an inevitable hardening of her own protective shell. Friendships change, focuses shift, and all at once Lady Bird is seen concealing herself for the acceptance she has so craved – at first with a wealthy popular girl in school (whom she lies to about where she lives), and then again with another boy in a local band who also doubles as a conspiracy theorist. Inevitably many of these ruses come to a head as they must, but Gerwig isn’t so interested in fallouts or regrets; these are learning tools for her character, who knows only one method and has much to discover as she pitches herself beyond the restraints imposed by her family.

The greatest burden proves to be the relationship she has with her mother – not because Marion is necessarily bad, but because she lacks an ability to be encouraging. This, we sense, is a result of behaviors passed down by her own mother, who we learn during a heated argument was “a drunk and abusive.” Gerwig’s point, I think, is that women who lack the experience of a positive upbringing are not always destined to negate those behaviors to their own children, even if they are cognizant enough to neutralize the worst of them. Marion is not physically abusive, but her words become cutting and harsh when Lady Bird continues with her defiant manner. And when the moment comes where she must discover that her daughter has, in fact, been applying to upstate New York colleges, the reaction is unexpected – there are no grandiose dramatic throes or angry diatribes hurled into the space between them. There is… only a deafening silence.

What is most impressive about the film, however, is its ability to perceive the ordeal with such painstaking plausibility. There is not a moment here that feels contrived out of formula, nor are the developments of the characters used to necessitate a cloying push for audience sentiment. “Lady Bird” is that rare film that simply observes as its characters move through the movements of everyday life, discover what works, reject what does not, and learn as they go without pitching at the level of overzealous screen-muggers. The movie’s restraint is just as remarkable as its attention to detail. And always at the forefront of those qualities are the two lead stars, who are an ideal pairing; Ronan plays well off Metcalf’s ability to seem jarring and authoritative without raising her voice, and the young actress possesses a deep attachment to this character, as if she is reliving circumstances that have become universal of any teenager in these cynical times. The final scene, which some have described as inconclusive, hits the exact right note for this story; to resolve a conflict that remains rooted in a mutual misunderstanding, Lady Bird places a call to her mother and recites dialogue that is pointed, bittersweet and informed. It is in that one moment where we are reminded that we aren’t merely watching a movie but witnessing the ascension of a person who has come to see the world as bigger than herself.