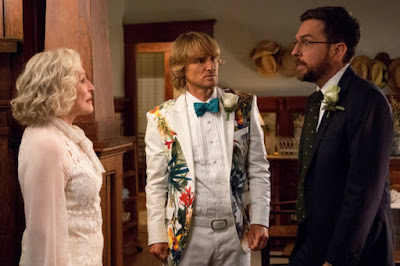 The trajectory of that possibility is more common than you realize. In the doldrums of lesser Hollywood, a gathering of mediocre brains is occasionally assigned to devise films (usually comedies) as an “alternative” to the more conventional output, which is usually dominated by sequels, comic book franchises or big-budgeted blockbusters. No one expects them to break monetary records, but they don’t have to; usually they appear in the halls of local theaters without much hoopla, meaning that if they are terrible, no one is liable to care enough to spread around bad word of mouth. While I cannot guarantee that the likes of Lawrence Sher (the director) or Justin Malen (the writer) belong to this club, their endeavors certainly echo them. “Father Figures” is a movie entirely without consequence, about people we don’t care much for, a plot of impossible silliness, and situations that seem hauled through the grinder of exhausted mid-tempo farce. Not a single moment on screen exists to provide anything other than an illusion of something interesting going on.

The “comedy,” as it is labelled, involves the antics of two fraternal twins – played by Ed Helms and Owen Wilson – who are estranged by differing perspectives in life. Raised without a father, their lives have seemingly been a series of episodes about filling voids left by an absent parent. Helms’ Peter, cynical and unable to hold lasting relationships, is a workaholic proctologist. Wilson’s Kyle, less serious and more in tune with the energies of the universe, lives a successful existence in Hawaii. Towards the opening of the film, they are both brought together by the marriage of their mother Helen (Close), who has done her darndest to instill the necessary values in her children but seems unable to bridge the rift between both. Is it simply because they have different outlooks? Or are there other details not yet revealed? A wise film, comedic or otherwise, would find justification in the feud. “Father Figures” uses it to simply test the flailing chemistry of its co-stars.

Moving on. During the evening following Helen’s marriage, Peter catches a glimpse of a familiar face on television: that of his supposedly dead father. When he confronts her with it, she makes a troubling admission: the identity of their dad has been a lie. But who was he, really? A series of tense exchanges suggest that she is trying to protect them from his identity, until a name slips that sets them out on an ambitious search for answers. The film, unfortunately, handles the reveal and the inevitable meet-up so superficially that we don’t initially buy it – the scenes play as if we are simply engaging with a lurid daydream. Only later, after details have been shared, do the brothers realize they have encountered the wrong man, and that further searches must transpire before they come any closer to understanding the truth about their paternity. These are the knee-jerk goals of characters trapped in the chains of your average idiot plot, although we have little sympathy for their situation; anyone who believes an impossible claim without at first hiring a private investigator or doing DNA tests deserves the long trek ahead of them.

And oh boy, is that road a long and tedious one. As new details come to light, the conflicted brothers drive up and down the coastline in search of the next person that may be their real father, only to come into the company of smarmy and pathetic losers who would make Darwin weep in shame. Consider Roland Hunt, played by J.K. Simmons, who is a gruff loudmouth ready to pummel the boys when they wind up on his doorstep… until he realizes they are the children of the same woman he once loved. How does he feel about the possibility that they may be his children? Most would find the revelation sobering; he simply sees it as an opportunity to expand his business of stealing expensive cars. The challenge in any comedy, however confused in its ideals, is establishing enough of a rhythm for us to ride the wave. But this movie only gives us brief glimpses into these lives before setting Peter and Kyle back off onto the road, in search of another possible candidate. Ultimately that leads them into such dubious scenarios as an odd hitchhiking situation (featuring an uncomfortable Katt Williams), a fight on a train track while the locomotive is oncoming, a random hook-up at a hotel that may be incestual, the crashing of a family wake and even the interruption of a veterinarian during neutering surgery, where the camera encourages the brothers to comment on a cat’s oversized testicles.

I can do low-brow, silly, even juvenile. But what are the filmmakers aiming for here, exactly? Their agenda is clouded by a climax that is shamelessly contrived, right down to the tender music overlaying Close’s final sobering monologue. Up to that point, however, we have barely belched out a chuckle. Wilson and Helms are likable actors, but totally unbelievable as brothers; when the film attempts to contrast their feuding with heartfelt admissions, they are never plausible. The ensemble of would-be father figures, meanwhile, are all too brief to be substantial, and the film seems more interested in using them as fill-ins for missing punchlines. If the last act of confession is supposed to place a new hindsight on the encounters, it only aggravates our patience. What was the point, then, of enduring everything before? Certainly not for comedy. Certainly not for stirring chemistry. And certainly not for seeing familiar faces move through material with grace or poise. No, “Father Figures” is two hours of a schtick that has been played to exhaustion well before now, and all that remains on screen is the husk of an idea that is flaccid, unending and joyless.