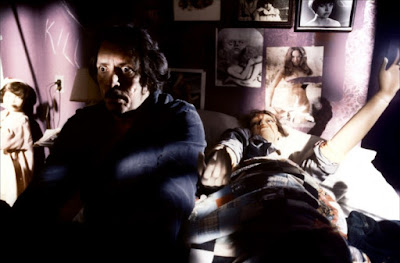 Long ago that was once seen as an attractive commodity. Released in 1980 at the height of horror’s craze with vulgar exploitation, the film created the traditional divide between critics – who loathed the result – and genre buffs – who provided it a platform of loyalty beyond its short theatrical run. Nowadays a great number of fans continue to reference it as a precious find amongst a crowded pool of low-budget burners about the homicidal tendencies of the insane, perhaps even setting the stage for the likes of “Henry: Portrait of a Serial Killer.” Any sensible person has seen both, however, could illustrate how easily they are separated by their values. The latter film, while challenging and cynical, is driven by the behavior of its terror, and the violence exists to be studied beyond its visceral impact. No one who will come to the frames of “Maniac” will experience the same possibility; the visuals are a loathsome exertion in perverse voyeurism. There is a moment during one murder that emphasizes the sharp contrast between the two: as Frank stands on the roof of a car and points a shotgun at the man behind the wheel, the trigger goes off and his head explodes, with the camera just close enough to collect splashes of blood. Four decades have come and gone and still no review has ever been written that argues a convincing case for a moment so utterly depressing.

Ironically, the premise adopts most of its ideals – however superficially – from “Psycho.” Frank Zito, the purported “maniac” in question, is already formulated by the time we catch a first glimpse of him, but early monologues between killings suggests the same dilemma that drove Norman Bates, whose own impulses played as a means of earning the approval of his mother. Frank’s destructive path, however, leads him directly to women who must play as surrogates for his hatred; because she may have abandoned him at a young age, each victim must be possessed, imprisoned, coveted, demeaned, and ultimately made to become eternal in a collection of physical security blankets. Coming to that possibility, unfortunately, requires each of them to be done away with in increasingly obscene ways. The first full reveal of his nature is seen after a prostitute lures him up to her apartment, promising him a full night of pleasure for $100, and a struggle ensues that results in a drawn-out strangulation done in close-up. There is no music cue to suggest tension or suspense, but that’s hardly a surprise: most of the underachievers who dare to sully the influence of Hitchcock rarely study more than the mechanics of the violence.

But are these moments lead-ins to a deeper investigation, at least? The movie seems to underscore that conclusion; what follows is a scene featuring the madman talking to himself with some frustrated intensity, as if juggling a dual personality. We learn he feels alone, hated, robbed of emotional support. A woman may be an object that is destined to always betray his expectation. Alas, the pattern that follows draws all the emphasis towards the act of murder and farther away from the troubled mentality, leading to a final hour that is relentlessly sick. If the slicing of a throat on a beach or a strangulation are not enough to derail our patience, consider an exhausting sequence in which a nurse is chased through a subway tunnel and into a bathroom, where she cries nervously for several immeasurable minutes waiting for him to walk away. Or a later moment when he breaks into the apartment of a model and ties her up before relentlessly taunting her. Do you think the director, William Lustig, is at all sympathetic with her, even after her sad eyes look upon her captor and she begs for mercy? The pendulum on my moral barometer was sent into tailspin when he cruelly plunges a knife into her chest, negating all remaining expectations of a hopeful outcome.

A better, more observant movie might get away with these sorts of excursions. Often they have, particularly with time, as filmmakers have shoehorned the violence into a relevant discussion point. If “Henry: Portrait of a Serial Killer” seems like the most direct progression, maybe “Maniac” in some way provides a morsel of groundwork for “The Silence of the Lambs,” “Seven,” “Kiss the Girls,” “Identity” and even “Saw” – all pictures with far more interesting subtexts. What students of murderous psychology get here is a circus of artless, inept meandering: a living record of blatant cruelty. No amount of patience is enough to alter that observation, and those who have sung its praises might be doing so from a place of desensitization. It is entirely possible, I guess, that a movie like this might seem passable to someone who can look at “Hostel” or the “Saw” pictures and find enjoyment out of them, and those who share a positive spin from memory can almost certainly be placed into one of two categories: people who have seen very few horror films in the last 40 years, or people who are relying on distant memories that have since betrayed them.

Then there is the question of what exactly occurs in the film’s ridiculous climax – is it something symbolic, literal, or sourced from an entirely different reality (perhaps even a nightmare)? Lustig is content to drag us along for 87 minutes of unfiltered bloodshed, with little in the way of exposition or character development, and then leaves us with… a moment that essentially clouds the certainty of all that came before? To what end does it function, if not to inspire a multitude of guffaws and angered tantrums? Certainly no one involved is perceptive enough to assume any of this is transpiring at a higher consciousness – that would imply a greater goal than anyone can reach for. No, like all that comes before it, the finale of “Maniac” is pitched without a sound intention. For all we know Frank may indeed be experiencing something that casts doubt on all the previous events. I don’t know. Nor do I care. By the time the film aims for one last howl of pain, the rest of us have excused ourselves to the nearest aspirin bottle.