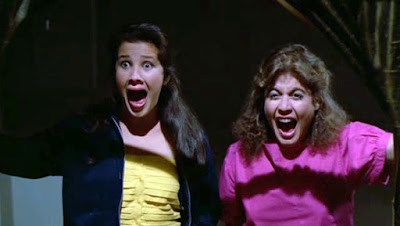 Sometimes we chuckle, often uncontrollably. There is a moment during the first act that provides one of the most notable howlers, during which the movie cuts to a scene in an insane asylum. A stern, haughty nurse in garments two sizes smaller than necessary, wanders through a public area of patients – all barricaded behind cheap chain link fencing – and chastises them for acting out in group protest. They start slamming themselves against the fence. She yells. The delivery is so obviously insincere that there is no other outlet than a shameless laugh – and certainly not to the point of the material, which otherwise seems delivered without wit or irony. Some could argue that the actress, however nominally, is attempting to pay homage to the famous Louis Fletcher performance in “One Flew Over the Cuckoo’s Nest,” but that comparison would decimate the momentum of any favorable argument. Here is a film so mistaken in nearly every detail, every iota of a possibility, that we stare at the frames as if accidentally wandering into a eulogy for basic intelligence.

But let’s draw back to that asylum scene for a second. A key detail is what, in part, drives the motivation of the story: the nurse momentarily catches the glimpse of a stranger in the garden with bad burns on his face, leading us to suspect him in part of murders that begin the following night. Greater suspicions have already formulated by that moment – particularly for anyone who remembers the prologue dream sequence, featuring a man who is set on fire – and his relationship to the heroine (Daphne Zuniga) becomes a driving mystery as details converge. Who is the man? And what can be made of a dream that may originate from a time of adolescence, when she has conveniently blocked out everything? A teacher hears the account of poor distraught Kelly and suspects the key to answers may rely on hypnosis. Others, including an overly protective mother (Vera Miles), conveniently protest. Perhaps that is because the dream’s source is a painful childhood memory that could cast doubt on everything she has known. Perhaps it leads to discoveries she is not exactly ready to face. And perhaps it ties into a growing number of murders that originate from the asylum, and now threaten her and all her nervous sorority sisters on the final night of hell week.

Here is the point of the discussion where you, me and all those watching have officially applied more thought to the film than anyone involved in its conception, ultimately leading us down a frustrating road where our interest can go comatose well before the final reveal. The centerpiece of the movie is a long, unending sequence that occurs at night in a shopping mall, where the sorority girls are asked by their sisters to go in and strip the security guard naked. He, conveniently, turns up dead. Other teenagers – some snotty, others horny – join the pledges to scare them in the darkened corridors, usually until an unseen madman has cut them down to size. One by one the dimwitted youths are disposed of in increasingly violent manners until all that are left standing are Kelly and the apparent maniac with face burns – but is he the killer, or is he protecting someone else? A mad rush to solve the riddle and save the heroine ensues, although Stewart unwisely assembles the remaining characters in a scene where no one looks at all surprised by the revelation.

We might have offered our own glimpse of awe, I suppose, in a movie that kept our attention long enough to warrant it. But “The Initiation” is not keen to pitch itself to any noteworthy interest. It gets away with doing the bare minimum – sometimes more so than usual, especially when it comes to the dialogue. Consider a precious exchange that more perceptive writers might have used for a savory double meaning; during a slow moment in the mall, one of the men announces that he is going to “take a leak.” A girl’s response: “I’ll help you find it.” A good portion of the audience chuckles, assuming there is a foundation to a more audacious exchange. Yet the screenplay by Charles Pratt Jr. allows it to degrade into a complete misfire. These characters are delivering without conviction or inflection, unable to pick up on the hook they have been provided (however accidental). Did Pratt, or anyone involved, believe that the target audience – teenagers – would look at this joke and not immediately allow their perverted humor to take over? Would it not have been golden to embellish? While I am hardly an expert on toilet humor or any of its dated facets, something suggests in me that 20-year-olds in the mid-1980s were never that literal or deadpan when it came to mindless slasher pictures.

There is an understated quality to being mindless. When a film simply gathers its victims in a space and picks them off one by one, our minds could shut off the need to probe and simply ride the macabre wave until its last drops of blood. “The Initiation,” unfortunately, makes a more fatal mistakes in judgment – it creates a puzzle that demands our vested attention, without bringing any of the actors or the details up to the required level. What we are left with by the end is 107 minutes of witless nonsense, populated by performers who would look more at home in after-school specials, and filmmakers who ought to have been left stranded on the unemployment line.