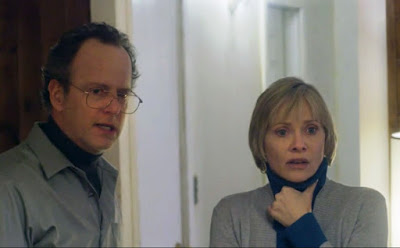 Few understand this better than the residents of the remote New England town where the hauntings occur. A small old house off in the distance lingers like a forbidden relic, and when it acquires new buyers they are prompted a visit as a show of neighborly courtesy. “This house has history,” an old man begrudgingly informs the Sacchettis, who have purchased the property to escape bad memories in the city. The old man’s wife, wide-eyed and unnerved, slips them a piece of paper that seems far more foreboding: “this house needs a family. Leave now.” What are they hinting at? Nothing concrete, because any possibility of the owners fleeing in fright might offset the house’s own sacrificial pattern. Later, we even learn the consequences of that possibility: after openly discussing the Sacchettis with a bartender who is in on the apparent plot, they remind themselves of what happened decades prior, when the ghosts turned on the town for not supplying them with a sacrifice.

How much can a ghost do, though? Most movies insist that apparitions are much less about harm and more about creating warnings, perhaps to prevent a similar fate from befalling the living. “We Are Still Here” doesn’t always adopt that philosophy. There is a moment in the second act when the Sacchettis, still grieving from the accidental death of their teenage son, invite a clairvoyant friend (how convenient) over to the property to assess a strange series of occurrences. The basement smells like something is burning. An electrician is rendered mute after being down there alone, having seen a series of shadows that appeared dangerous and threatening. Picture frames fall by themselves. Noises and images follow in their dreams. The wife, Anne (Barbara Crampton) suspects it might be her own son, from beyond the grave, trying to initiate contact. The psychic, May (Lisa Marie), senses graver energies at work. This possibility culminates in a scene where her husband, Jacob (Larry Fessenden) foolishly holds a séance while the girls are out shopping, and one of the vengeful forces attaches itself to his soul. The movie isn’t exactly clear as to who the entity belongs to, but one thing is for certain: after we see it snatch and kill a couple of innocent bystanders just shortly before, it’s clear you wouldn’t want to find yourself alone with it.

This is the sort of movie that defies analysis for two simple reasons: 1) the underlying premise is as conventional as horror film setups come; and 2) several of the specifics are never nailed down long enough to warrant a fair measuring stick. Yet here we are, yet again, talking about a film that wants to be regarded on some level of merit. What can be said of the experience is this: you’re rarely let down. Almost none of the story is plausible, and the ambiguity of the supernatural agenda leaves more questions than it resolves. But there is a skill working through the frames of director Ted Geoghegan’s debut opus, providing us with enough allure and tension to more than make up for the maddening uncertainty. Moreover, he has also created an effective visual for his mysterious villains: an assembly of charred figures who stare blankly back at their prey, haunting white eyes and all. Who they are and what they can do is of little importance, ultimately, because they are effective conduits for well-orchestrated jump scares. There is a wonderful scene in the middle that proves his capability: the dead teenager’s best friend has shown up to pay his respects to the grieving family, hears a sudden noise in the basement, wanders down to investigate and becomes one of the house’s unfortunate victims. How Geoghegan plays it proves he has payed attention to all the obligatory editing and sound techniques used of the great craftsmen, and though we see the twist coming from a mile away, it plays effectively in material that is starved for a frontal assault of the senses.

What it amounts to in the final frames is almost trivial. The last act plays less as a climax and more like a brutal massacre, full of sudden reveals, narrow escapes, emotional meltdowns and rather bloody exchanges (including a shot of a man’s head exploding between a set of hands). To see the scenes is to suspect those involved of trying too hard to extend themselves beyond mere loud noises or ambushes, and the violence is unnecessarily excessive. What that means, by the end, is that we’ve enjoyed ourselves without exactly being able to say anything has made a lasting impression. That’s to be expected for Geoghegan, maybe, considering his list of credits thus far has only included some writing and TV pilots. This is his screen test. And with a little more modulation, less of the gore and some answers to crucial burning questions, an idea like “We Are Still Here” could easily rise above being a collection of scary moments and mean something monumental. One imagines he may be on his way, given the refreshing audacity of his treatment.