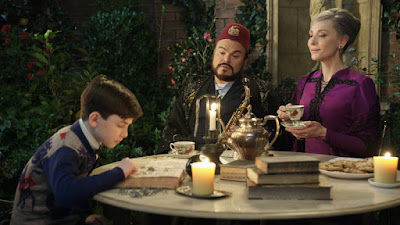 The young hero of “The House with a Clock in Its Walls” is one of the more unfortunate examples of the literary trap we now know as young adult pathos. He adopts a trend that can be described as such: if you’re a prepubescent eccentric who engages better with daydreams then actual people, it’s inevitable for the story to make you the victim of immense grief before dropping you into a life-threatening adventure. And in the tradition of the displaced orphans of “A Series of Unfortunate Events,” poor Lewis Barnavelt arrives at the opening of the tale not eager or excited by what he is about to experience, but crippled by the horrific knowledge that his parents recently died and left him in the custody of a virtual stranger. How can he possible be roused to enthusiasm, then, by the strange and ambitious whimsy going about all around him? Are the likes of an eccentric uncle played by Jack Black and a female accomplice played by Cate Blanchet enough to undermine his sorrow? Or is the pain under the surface the sort that negates all the wonder and joy that ought to come with the discovery? A straight document of these events might contrast the of the scenario with the psychological disconnect of the characters, but what fun would that be when a world of magic possibilities is just waiting to be unleashed?

As a kid yearning for excitement it is easy to dismiss real life problems in the middle of a fantastical escape. As an adult, it feels like a paradox we are cursed to contemplate. The argument is muddied further as we move into the modern realizations, where stories begin to reflect a culture of totalitarian governments and political fascism instead of the quirks of its personalities. Although early fantasies like those going on in Narnia or Oz were hardly liberated from dangers, their writers were skillful at deflecting the tide of cynicism long enough to create more optimistic tones – to them, a world next door had to be worth escaping to. But now reality bleeds into the visions of adventurers, imprisoning them in agendas where the alternative to failure is usually death or suffering, sometimes together. To them, a story like “The House with a Clock in Its Walls” may represent a far less sophisticated time, even though its one of those stories that sees no qualm about providing the lead all the obligatory cues of personal tragedy and the subsequent terror.

Harder to comprehend, furthermore, is how all this winds up in the hands of Eli Roth, one of the more perverse of modern filmmakers, without becoming an outright celebration of violence or mayhem. What he has concocted for his first family-oriented outings is, in fact, something of a refreshing original: a tightly-wound package of quirk and behavior in which people are less the passengers of a special effects vehicle and more like pilots into a voyage through nostalgic dichotomies. At some point during the film, when my pessimism ought to have overwhelmed the occasion, I simply forgot I was an adult and descended freely into the material; young Lewis became a friend worth sharing company with, and the adults felt liberated from the conventions of ordinary parental figures, who would have insisted on far more boundaries than a yarn like this would have tolerated. Certainly, in hindsight, the cynical mind looks back and wonders how anyone could be having fun when the premise sits at the edge of an apocalyptic showdown with sinister villains, but for one shining moment we forget, indulge and enjoy our time with these people, however awkward or aloof they may be from the underlying risks.

Roth strikes this chord of possibility, I suspect, because he has acquired actors who have a plausible investment in the material. The setting is a strange old house in an undisclosed American suburb, where the exteriors suggest a time displaced from everything occurring beyond its gates. Lewis arrives there shortly after the untimely demise of his loving parents, who have apparently perished in a car accident and have left custody of him to Jonathan (Jack Black), his mother’s estranged brother. A suggestion lurks between the lines that the siblings rarely got along in life, forcing a separation that was never resolved. Why? Perhaps because Jonathan, going against the wishes of his family, became a practitioner of magic, which is typically viewed as a destructive lifestyle in these sorts of plots (think of the cultural divide going on in “Harry Potter,” for instance). That has relegated him to the status of misfit, which Lewis identifies with from the first moment they share company. Emphasis is provided further by Cate Blanchett, playing a sarcastic neighborhood witch named Florence, who froths at the mouth with sharp insults while still coming across as a dependable friend in tough situations.

The players assemble strategically at the sight of this house for a much more sinister purpose: within its walls, behind the cover of Victorian architecture and moving portraits and living objects of furniture, a hidden clock ticks with menacing precision, counting down to something potentially foreboding. Jonathan and Florence have a suspicion of what it could mean – the house, famously, once belonged to one Isaac Izard (Kyle MacLachlan), a renegade warlock who practiced dark arts and necromancy before his demise – but any theories are kept away from Lewis’ curious heart. That forces him, of course, to join in on the sneaking around as the clock ticking gradually increases, and part of him wonders whether a tall locked bookcase – from which he is forbidden from going into – might carry answers. Eventually he must break the rule to push this plot forward, as most kids in fantasy must, and the hands of fate are forced in a way that leads them through a colorful menagerie of confrontations, chases, explosions, tight corners and even daring escapes from death.

Not a lot of them are anything new or groundbreaking. Based on a book from the early 1970s, what occurs on screen fits one of the more conventional bills of young adult fiction, right down to the formulaic menace of schoolyard bullies and tear-filled confessionals that cause rifts between family members. But Roth, however audacious, is always a man for detail, and his understanding of the early standards of popular culture underline the material with wisdom, skill and refreshing gumption. To see the movie is to feel cheerfully caught up in the pages of a great book we might have accidentally discovered at the school library. And though there are few surprises on the way to a standard conclusion that involves raising the dead and unmasking diabolical agendas, all of it moves to the wave of a wonderful sense of nostalgia. Think back on a recent crop of films about kids facing deadly obstacles and think, just for a moment, about any in which the participants looked as if they were having fun. Were the likes of Katniss Everdeen every allowed to experience joy? How long was Harry Potter allowed to indulge before being caught in the long shadow of a villain destined to kill him?

One other detail that might be overlooked in the film’s broad notices: the special effects are sharp and clean, without being over-emphasized. That becomes almost a sinful admission, especially in these times when stories require rather ambitious illusions, but here the technical wizards have created a world that is as plausible a reality as any you might walk into on the other side of town. The house, filled with long corridors and overreaching ceilings, occupies a legitimate sense of space. The characters use magic that seems rooted in real optics rather than CGI. And the climax, taking place primarily involving a clock’s oversized gears, genuinely feels like a place where the actors are facing legitimate dangers. Is Roth working this way, perhaps, for the same reason that his great teacher, Quentin Tarrantino, prefers actual film stock to digital photography? Because it offers a crisper perspective? A better sense of depth? In a time of visual nonsense, here is a movie that invents just enough without drowning out the motives or behaviors of its human subjects.