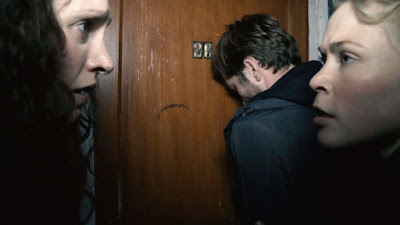 The necessity may have at least seemed obvious. The final scenes of the first feature certainly did not explain away the mystery, after all; even though newly-revealed footage offered insightful glimpses into the night more than a dozen people died inside the dangerous local attraction, one last impulse on part of a curious documentary filmmaker left open too many questions for any sense of closure. The problem with most sorts, alas, is that they are rarely comforted by the lack of enlightenment, even if a potential explanation could distort what comes before. Think of how less one might think of the otherwise decent “Paranormal Activity,” for instance, after a series of sequels attempts to rationalize the material with overzealous commentary. Do we need to know whether the Blair Witch was real, or is the idea that she could be a satisfactory possibility? The easy approach cuts through the uncertainty, and therefore our instinct to be roused by a morbid imagination. The final ten minutes of “The Abaddon Hotel” are so stuffed with over-emphasis that the imagination has no opportunity to embellish or revel in the alternative. The movie cheats us out of the gift of doubt.

But now I’m getting ahead of myself when there are other offenses to mull over. The opening of the picture is debatable, too: it involves a roundtable of commentators on an internet talk show, where they intend to discuss the continuing paradox surrounding Abaddon’s most notorious failed attraction: a haunted hotel that claimed a series of lives on opening night eight years prior. Attempts have come and gone to explain or even uncover the source of said massacre, but rarely with anything concrete; those that have come close have either died trying, or left behind the sorts of morsels that are ripe for scrutiny in the hands of cynical naysayers attempting to disprove supernatural theories. The panel on said show contains all the above – plus one peripheral witness (Vasile Flutur), who was part of the crew of the previous documentary and has endured in the conversation to, maybe, find out what happened to his former boss Diane, who wandered into the hotel herself in the last movie and vanished without a trace.

It turns out her fate has since been shared by a handful of rebel internet sensations seeking a little slice of viral notoriety, including people on Facebook who go in while on live feed, and never emerge. This has since inspired local police to station around-the-clock rotations of officers at the lot in order to prevent any others from going in, lest it add fuel to the fire of an ongoing mystery. What does that mean for a trio of new filmmakers who are convinced the house must contain a storage room full of secrets from the original proprietor, and hope to infiltrate it with the help of Diane’s former colleague? It means, of course, that they must monitor the shift rotation long enough to exploit a narrow window of time in which they can slip in unnoticed, which also means no one in the outside world will know where they have gone if they, too, never emerge. How convenient. But the movie does not want to confuse the possibility so clearly, so of course it jumps ahead randomly to remind us, yes, that one of the individuals does in fact wind up surfacing days later, at the doorstep of police officials who must interrogate her in order to find out why she is bloodied and incoherent.

Her name is Jessica Fox (Jillian Guerts), and she comes to the discussion after a mysterious package arrives at her doorstep, suggesting the presence of more video inside the compound in question. A phone call into the internet round table connects her to Mitchell, Diane’s surviving colleague, and places them in the center of a proposed agenda that will also include Brock Davies (Kyle Ingleman), a local paranormal enthusiast who thinks he can contact the spirit of the original hotel owner by joining the filmmakers on their trip inside. Are you following this all? The mystery deepens, as it must, when Brock’s attempt to carry a conversation using the wedge from a Ouija board leads to his death, and then their one lookout (Joy Shatz) mistakenly comes into the hotel when she should remain outside, just in case someone might be needed to call for help. Now isolated in the middle of what is clearly some supernatural ambush, the survivors run up and down hallways, down staircases, barricade themselves into rooms and attempt to save light sources as noises around them move ever so close.

Sometimes, they even encounter literal horrors, including mannequins who move on their own, and figures with white eyes who blink at the sight of a light source. In defense of Cognetti, he stages the jump scares with some level of skill, relying on the same sleight of hand camera tricks he used in the prior film without bogging them down in screams or loud obnoxious thumps in the soundtrack. Those expecting more of the same will be overjoyed to discover themselves still reacting in physical jolts. But those moments are now surrounded in utter chaos and nonsense, without a consistent hand guiding them towards a single point. Likewise, the actors barely register a notable presence – especially poor Joy Shatz, who is given nothing to do other than sound awkward and react flamboyantly when the story calls for a confrontation with an evil presence. Were they working with any direction from their boss, or was he content to simply allow them to react in the moment? In some instances that works. Think of “The Blair Witch Project,” which was almost entirely improvised. One could argue, I guess, that today there is way too much self-awareness to make an organic response in an actor seem very convincing, but just as material requires the confidence of its creator, so do characters need the conviction of people who understand behavior beyond being loud or reductive.

And how about that long and literal ending, huh? It seems written with too many intentions, as if Cognetti was compelled to explain everything while creating enough intrigue to inspire the need for more sequels. A more direct complaint: the reveal just isn’t buyable, in any reality. We wander through these dark corridors, peek around all those menacing corners and walk the bloody footsteps of former victims just so that we can reach a point of implausible cop-out? What gives? It matters not. “Hell House LLC 2” exists, I suspect, to provide its creator and a handful of aspiring actors a chance to revel in territory they are comfortable in, without giving them anything of consequence to conquer. There is some level of joy in that for them, I suppose. Just as there might be for audiences who appreciate more of the same, even if it comes at the cost of a consistent tone or rhythm. I applaud their patience.

Produced by Joe Bandelli; Directed and written by Stephen Cognetti