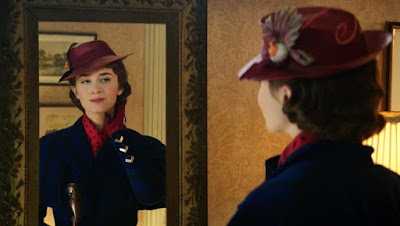 The greatest risk, no doubt, comes with the sharp divide of time: how do you make a sequel so long after the first, when nearly all the original actors have passed on and recasts are required to fill key roles? The studio has answered those challenges with a perceptive outlook. Consider Emily Blunt, for instance, who assumes the Poppins mantle; rarely one to reduce herself to simple or straightforward portrayals, she comes to the screen as if unburdened by the awe of the persona, all while managing it with charisma and rhythm. She is as much the character as Julie Andrews was all those years before. So, too, did the casting director make wise choices in bringing Ben Whishaw and Emily Mortimer as the aged Banks children, who no longer remember their youthful adventures and have gradually settled into the literal realities of adulthood; Mortimer looks much like how we expect Jane would at her age, and Whishaw has an edge that compliments the gloomy progression of the character. Together they offer a precious glimpse into a world that can come after the daydreams have faded, when reality plays like a mirror cruelly reminding us of what we lost.

The initial premise corroborates that potential. It is a time of great recession across London, and the Banks siblings are facing the loss of their family home to greedy bankers threatening to foreclose. This is a reality that comes at the behest of another tragedy: the loss of Michael’s wife, who died of an illness the year before and left him as the sole parent of John (Nathanael Saleh), Anabel (Pixie Davies) and Georgie (Joel Dawson), their three kindly children. As is usually the predicament of these stories, the deceased wife functioned as the primary nurturer, and without her, Michael is doomed to stumble his way through a facet of parenting that is often frustrating, strange and unpredictable. Of course, that will in turn lead to the return of one Mary Poppins, who emerges from the cloudy skies over Cherry Tree Lane and marches into a household in chaos with the same familiar mantra: “I am here to look after the Banks children.”

The difference between her last visit and this, besides the obvious, is the emotional nature of her subjects. Michael’s children are not troublemakers acting out because of ambivalence, per se, but curious youngsters in need of guidance that was taken from them. Their initial routine suggests a maturity that rose from grief: Anabel and John are constantly looking after young Georgie, who often wanders off looking for adventure, and neither is compelled to challenge a father acting on stern impulse because, well, they understand his pain. Poppins sees these realities as the gateway to a wondrous series of escapes, including a bathtub adventure involving a world of dancing aquatic creatures, and a ceramic bowl that acts as the housing unit for an animated circus. Each recalls a scenario seen in the earlier film, where Mary and the children literally jumped into sidewalk chalk drawings, but director Rob Marshall fills these moments with a freshness that is admirable – they aren’t so much anchored by formula as they are lifted by a blend of nostalgia and whimsy. And later still, as she and the three children are working their way through the murky side streets of London, they come to keep company with an eccentric cousin played by Meryl Streep, whose entire living space turns upside down and inspires one of the more obvious intellectual lessons.

Most of the sequences, exchanges and encounters are punctuated by music that is in the tradition of modern movie musicals: less concerned with catchy melodies in favor of a deeper lyrical context. Not too many of them are instantly catchy, but that’s hardly the point when the exposition uses them to a different function. They are, nonetheless, plausible conduits for Marshall’s skill for visual choreography, and the movie’s best scene involves a group of lamplighters dancing in a courtyard. This also must eventually lead to a climax in which they are asked to stop Big Ben’s midnight chime, so that Michael can arrive at the bank in time to save his house from repossession. But will the cruel and unmerciful banker played by Colin Firth bow to reason, or has his need to capitalize on the misfortune of his clients made him impenetrable? The movie makes him a one-note villain, I suppose, because a story like this almost doesn’t need one. But in a movie where every high-profile actor has a stake in an appearance, couldn’t there have been much worse for him to work with?

Little of this really affects much of the on-screen details. That’s because “Mary Poppins Returns” is not a movie concerned with continuity, narrative structure, character arcs or reality. It wants us to identify with emotional waves. Those of us who have become adults once did not always sense the curse or pain of age, and the trio of Banks children are like symbols of that purity: robust and persistent, unphased by the stubbornness that seems to imprison the motivation of their elders. Mary, as such, plays like the quiet and understanding mediator between both worlds, and Blunt conquers the challenge set against her without directly mimicking her predecessor; it’s as if the façade of Poppins has undergone its own quiet evolution. Among the familiar strokes that the characters embody, the most enlivening belongs to Lin-Manuel Miranda, who plays the lamp lighter Jack; as a secondary guide through the adventures of the film, his charm is utterly infectious, and his skill for song and dance allow him to stand out in what might have otherwise been a static blend of figures in a moving background.

If something feels different about the movie’s timing, it’s because it arrives in the middle of a fog created by the diverging sensibilities of more socially activist filmmakers, who have crowded the recent theatrical lineups with stories that are more about challenging convention than bowing to it. That creates a contrast that might have seemed unfamiliar to fans of the original, which was made at the height of the Hollywood boom for large-scale musicals. For the Disney brand, Mary’s demeanor was simply mirroring the desires of the audience; now, she stands in the midst a world where the chaos and ruin have saturated conscious thought. It’s a wonder she isn’t swept away by it. But Marshall, who has not made very many movies I have approved of, turns out to be the ideal choice for giving this yarn the sense of invigorating optimism that allows it to work. “Mary Poppins Returns” is not earth-shattering cinema, but in those two enthusiastic hours I found myself transported to a place and time I relished revisiting.