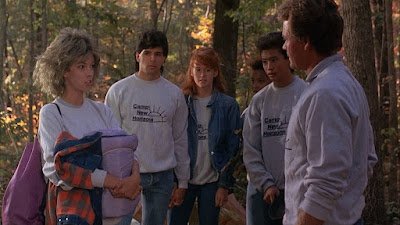 Now that we have overcome that pesky obstacle, let us deal with the obscured brilliance of Michael A. Simpson’s audacious creation: a woman who turns out not to be a maniac at all, but a vigilante of moral justice who is simply clearing out all the shoddy ruckus collecting at the bottom of the gene pool. Consider a conversation she has with one of her victims: during a trust game in which a girl is blindfolded and led through the woods, Angela asks her a series of questions that turn out to be tests. Is she a cheerleader? Of course. Has she had sex? Also yes. Does she take drugs? That goes without saying. “Three strikes!”, she announces. And so now we finally have a conclusive portrait of exactly what offends poor misunderstood Angela, even though her trajectory through three crime sprees hasn’t always synced up with that philosophy. Perhaps she is sparing us the dilemma of associating with people who lack focus. How dare they partake in teenage pastimes! Who do they think they are, anyway: leftovers from Camp Crystal Lake? This is a world of purity and good nature, gosh darn it.

But how does she get there again without legal authorities sniffing her out? Her plan is ironclad: kill a random girl in the city heading out to camp and assume her identity, of course (the scene, involving a garbage truck in a high-speed chase, is a precious sight). That means she will arrive at the doors of Camp New Horizons without anyone knowing exactly who she is – including a news caster who has come to cover the opening of this new venture while simultaneously reminding everyone of the terror occurring there a year prior. That, of course, makes her a certain target for the obscured Angela, who probably would have preferred to engage with teens unaware of the camp’s past; the anchor woman is subsequently seen convulsing in her car while doing drugs, unaware that her cocaine has been replaced with Ajax crystals. Later still, a promiscuous camp counselor is bludgeoned outside his tent with a stick, a prankster is killed in his sleep with a lit firecracker in between his lips, and another is burned alive in a tent while Angela roasts marshmallows over the cinders. All in a day’s work in the great outdoors.

The killings continue without interruption, with increasingly elaborate scenarios playing out as the mental capacity of the victims seems to speedily diminish. That’s all part of the joke, I am reminded: people in these movies are naturally dumb, and therefore even someone as straightforward as Angela can get away with the most implausible scenarios (my personal favorite: burying a counselor up to her neck in dirt and then running down her screaming head with a lawn mower). Ok, I’ll buy that. After all, I have sat through ten “Friday the 13th” movies, countless pictures in the “Halloween” franchise, including remakes and reboots, and who-knows-how-many one-offs about dumb adolescents wandering freely into the sight of homicidal lunatics. Should any of this be a surprise to me? Hell no. So many of them so clearly deserve their fates when you consider their behavior, don’t they? Playing rap music on a boom box too loud in the morning, making love to one another in the dirt, shouting out racial slurs, playing annoying pranks using firecrackers, spray painting on tents, putting the moves on others without consent – why, if these human clogs didn’t learn how to be civilized in their youth, a sharp blade or a speeding bullet can certainly cure that problem.

I accept this reality now more than I did during the first movie, which played like an act of torment on anyone carrying more than a few brain cells. At least it was about something. Then the premise was set adrift in the thick of a sequel that functioned with even less thought, choosing to not even bother with an underlying mystery; Angela was known as the villain from the first frame, perhaps to spare us all that exhausting trek through clues and evidence that would assist in, you know, solving the case. I guess in some roundabout way, yes, these are movies that exist to be funny. “Sleepaway Camp III” confirms that with assured clarity: there are characters so utterly dimwitted that their deaths almost provide some sense of cerebral euphoria, as if we have been released from the pain of keeping their company. Even good old Angela looks thoroughly bored with the mere idea of them breathing, remarking in a key scene one of the great truths of most dead teenager films: “Why did I think this year would be any different?”

Unfortunately, this is a series that was made in that odd window between spoof and satire, when everyone preferred their humor to be literal rather than underlined by irony. The comedic goals aren’t exactly thought out. Ergo, what we get with these movies is a pattern of witless scenarios that only cause chuckles by association rather than intent. They aren’t about stupid people in front of the screen, even subconsciously. Perhaps in modern hindsight, today’s audiences find some perverse joy in this – what Angela’s victims go through seems so implausibly destructive and weird that there is no other reaction to have. Kudos to them. But I have seen far too many horror films and studied enough psychology to know when a filmmaker is masking his own shortcomings, and these are no more intentional comedies than the Earth is a flat panel. But hey, if it’s laughs you are after, however unintentional they may be, part three provides all the precious morsels. Starting with the idea that anyone felt the need to make it.