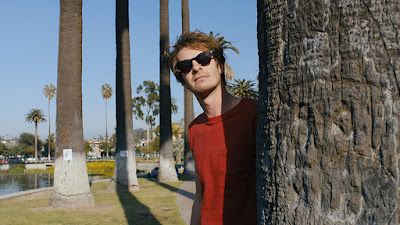 Early on in “Under the Silver Lake,” Andrew Garfield offers the first of what turns out to be countless stares of confusion, as he gets caught up in a mystery that lacks all obvious conclusions. It turns out his gaze will reflect the inevitable response of the audience observing him. That is not to say they will share the same intrigue or dedication to the cause, mind you, but instead will discover themselves trapped in an agonizing web of deceit that tests the very patience of their commitment. For what, you may be curious? Consider this scenario. Garfield plays a Los Angeles 20-something, wandering from one sensory experience to the next, who befriends a beautiful blonde woman living nearby. Then she mysteriously disappears – along with all her belongings – the morning after they share some innocent flirtation. Possessed by a suspicion that she vanished as a result of foul play, his journey to find her takes him into a maze of controversies, conspiracies, false leads, lurid fantasy, violence, death, long-winded monologues, inconclusive solutions, absurd puzzles, hidden messages, and virtually every possible detective device every utilized in a movie. That it is all made with a remarkably sense of craftsmanship only adds to the offense; this is an endeavor so overwrought, so obsessed with tossing the proverbial rug of chance out the window, that it never deserves the aesthetic of the man orchestrating it.

His is a forte now worth mourning. After making the striking “It Follows,” a well-received debut about a supernatural being who follows around people who share sexual activities, David Robert Mitchell seemed poised to nestle himself in that elusive sweet spot of creative freedom, when he could get any premise greenlit and financed without a hard sales pitch. What he has returned with is this, a picture so utterly misguided that it has already inspired theories across the Internet, ranging from the plausible (his screenplay could have been incomplete, or even an amateur exercise) to the outright absurd (“Maybe he made the move on a dare,” one blogger argues). Others still have simply accepted the endeavor as indicative of the curse otherwise known as the sophomore slump, which many new filmmakers tend to experience after hitting it big with inaugural sleepers. I would argue against a dismissal that simplistic, especially given just how ambitiously the film goes off the rails. This isn’t a creative dive at all, it is a suicide bomb masquerading as an audacious shift in direction.

The crux of Mitchell’s ambition comes down to an awkward marriage of larger sensibilities, both in terms of style and narrative. The path of his lead character, for example, meanders into a personal hell of self-loathing that is a staple of neo-noir. Early on, there are two devices that suggest the stylistic yearnings of Hitchcock: the hero is seen routinely spying his neighbors via binoculars (“Rear Window”) and cautiously stalking them out in public to learn otherwise obscure details (“Vertigo”). The music, likewise, suggests an affinity for the devious orchestral cues of Fincher and Nolan, both of whom have used their scores as a tool to underline the subconscious. What they collectively indicate, particularly when one considers the almost uncanny homages to John Carpenter contained in “It Follows,” is another filmmaker who is possessed by a deep understanding of film and its values. He has studied the masters as easily as most breathe. So what in the world moved him out of the trajectory of cautious nuance and into the embrace of loathsome insanity? “Under the Silver Lake” proves to be such an ordeal that many would be hard-pressed to sit through it a second time, even if it’s just to figure out what went wrong.

The “hero” of the film is Sam (Garfield), a southern California underachiever whose life came be summarized in the broadest of strokes: he is a loaner who smokes weed, spies on neighbors, neglects answering calls about overdue rent and car payments, invites female friends over for sex while remaining half-clothed and watching television, and reads amateur fiction to fuel suspicions about elaborate political conspiracies (more on that later). That all is well and good, of course, provided his interests are not broken by radical shifts from monotony. But when a beautiful woman named Sarah (Riley Keough) leads him into her bedroom after he has watched her from his balcony, suddenly he finds himself deeply infatuated. It barely registers on him, unfortunately, that their brief rendezvous is interlaced with unspoken anxiety; as they say goodbye to one another in the courtyard, her nervous demeanor provides foreshadowing that he does not pick up on. The next morning, she and all her belongings have vanished, and legal authorities have dismissed it as nothing more than just a girl who “decided to move in the middle of the night.”

So begins a personal agenda that takes Sam into the intellectual webs of socialites, alternative thinkers, incessant partiers and supernatural phenomenon that all point to one specific thing: the agonizing inability of a focused filmmaker to box all his elaborate ideas into a single, cohesive puzzle for the audience to follow. His crux is direct enough – Sarah’s disappearance may be a symptom of a social sickness harnessed by the wealthy – but he creates far too many misleading suspicions in his pursuit for answers. Consider an early scene, for instance, that suggests Sarah was the passenger in a car discovered blown up in the Hollywood hills. This vehicle, we learn, also belonged to a politician previously thought missing, who had an affinity for hiring prostitutes. Does that imply Sam’s object of affection was, in fact, a hooker? The movie doesn’t allow him to focus on the possibilities, much less any tangible forensic evidence, until towards the climax; before then, he is more interested in looking for clues hiding inside indie rock band songs (no comment on how he arrives there) and slogging through social events where everyone, including irrelevant sources, stand around and suggest elaborate red herrings.

The most agonizing of these descriptors involves a bizarre supernatural element suggested by a cartoonist, who lives in one of those conspicuous Hollywood lofts filled with eccentric décor and hidden rooms beneath bookcases. Among a plethora of odd suggestions he is willing to interpret is a theory involving the “Owl’s Kiss,” which involves a feminine beast wandering into the homes of men and devouring them in their sleep. How does it relate exactly to the disappearance of Sarah? Your guess is as good as mine, although the discussion provides enough doubt in Sam for him question it seriously – especially after the source turns up dead and bloodied of what legal authorities dismiss as an unfortunate suicide. Mitchell doesn’t just bother with mere suspicion, either; there is a subsequent scene involving security cameras that reveal something startling, and later still when Sam is nearly ambushed in his own apartment by a frightening figure in the dark.

In some way, those little pieces might have amounted to something in the clutches of a more focused screenplay; here, in a movie that is unclear about what it wants to be, it is simply another piece of a puzzle that doesn’t fit anywhere in a logical sense. Some, I guess, will see that not as a problem and more of a pseudo-hip metaphor about the absurdity of movie mysteries. I consider it the mark of a madman losing control of his aesthetic. Who did Mitchell really make this for: the same crowd who flocked to “It Follows,” enthusiasts of lavish free-form storytelling, or himself? Not a single scene beyond the initial conflict exists for any purpose of hooking our intellectual curiosity. The final explanation, certainly just as convoluted as all the material that comes before it, offers two further insults: 1) it solves a theory that negates much of the meandering that comes before; and 2) provides an idea that is as jaw-droppingly pathetic as the final explanation of “The Happening,” which too was about a terrible reality brought on by ludicrous possibilities. That film, you will recall, was made by a man who had already embraced his knack for cheating the audience out of a decent climactic revelation. Watching the final act of “Under the Silver Lake,” I wondered if Shyamalan was somewhere nearby taking notes for a sequel.