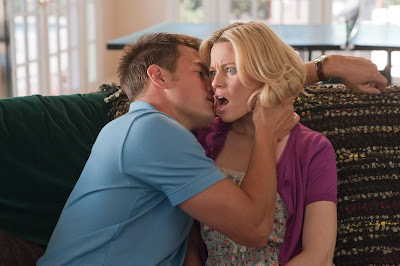 The movie mirrors the same agonizing experience that comes along once in a generation, where established names lend their voices to material that inevitably poisons the well of their own inspiration. Contrast this reality with one last seen in the notoriously bad “An Alan Smithee Film: Burn, Hollywood, Burn!”, a film that came and left countless reputations in piles of cinders twenty years ago. By then the movie system had recognized the possibility of causing so much professional chaos; two decades prior, a similar curse befell “Caligula,” starring Malcolm McDowell, John Gielgud, Helen Mirren and Peter O’Toole in a vehicle that seemed manufactured to sabotage any momentum they had left as serious film thespians. Is their something within the studio pitches of these projects that is strangely persuasive, almost alluring, to investors? Do they get off at the idea of gathering top-notch talent together just to destroy them in one fell swoop? What enemies did they create on their long slog to the top? Any number of the high-profile failures we know of came to be because they were driven by scorn. And if money is really the source of all that is wrong with the business model behind artistic license, movies like this function as reminders of the industry’s cruel duality.

Cruelty is the least of the problems working against “Movie 43.” The primary story arc revolves around the would-be aspirations of Charlie Wessler (Dennis Quaid), a desperate writer so hell-bent on making it big in the industry that his routine involves a vulgar routine: namely, holding a talent agent at gunpoint and forcing him to hear a collection of bizarre story pitches. This is a cycle repeated ad nauseum over 94 grueling minutes of footage that show full visualizations of his premises: some tone-deaf, others corny, all of them delivered with sanctimonious sincerity. The running gag isn’t merely just how terrible the concepts are, but how many well-known faces populate them on camera. Consider, for instance, an early sequence in which Kate Winslet and Hugh Jackman play two likable people on a blind date; when he removes a scarf at the restaurant, he reveals testicles on his chin. How did either of them look upon this situation and find merit with it? Another: Naomi Watts and Live Schreiber play parents to a homeschooled teenager, and in an effort to immerse him in the adolescent culture they take on the roles of teenage bullies and love interests; as they tell this yarn to a couple of neighbors, their dismay seems inspired less by performance and more by literal discomfort.

Each of these segments, directed independently of one another – some by very reputable filmmakers – have all the nuance and skill of a concert pianist having an epileptic seizure. There is no attempt at marrying the sequences to one another, and even less endeavor to create a believable thematic overlap in the Kinnear/Quaid episode; they are simply there to recite setups for others to feast on, without consequence to how they might move the arc or its situations forward. That would require more forethought than possible, alas; like exchanges one might see on any number of “Jackass” episodes, each segment is completely self-contained, with no connective tissue other than the arrogant conceit to baffle as many members of the audience as possible. Sometimes we laugh, although rarely for the intended purpose; many of these actors are so frequently spied looking uncomfortable that they seem less like instruments of comedy and more like the unfortunate butts of greater, unintentional jokes. The greatest of these victims may be Josh Duhamel, who shows up late in the movie to play the dimwitted owner of a house cat that – get this! – is attempting to derail his romantic relationship out of jealousy. Words escape me when Duhamel’s on-screen love interest, played by Elizabeth Banks, stumbles in on the feline masturbating to pictures of her hunky owner.

Other offenses feel too numerous to mention. Chris Pratt being asked by Anna Faris to defecate on her as a symbol of their sexual union. Emma Stone and Kieran Culkin awkwardly insulting one another over the PA system at a grocery story as some sort of bizarre foreplay. Halle Berry engaging in a grotesque game of Truth or Dare with an eccentric British man. An entire episode revolved around the stains on a couch caused by menstruation. These are the antics of people who understand everything about shameless shock value and nothing about resonant comedic situations. Others, usually underachievers on the fringe of the blogging culture, argue against that theory, with some insisting the picture endures because of the charm lurking beneath its audacity. Those are the sorts who would probably campaign in favor of some of Hollywood’s most legendary bad ideas, including that infamous unreleased comedy about Jerry Lewis playing a Jewish clown carrying his brethren off into the Nazi’s ovens.

There is a need, I suspect, in having comedy function as an endurance test. If we are intoxicated by a desire to see just how far we can lose ourselves in material without it passing a personal limit, so is there a chutzpah in performers to dangle their audiences over the razor’s edge. Unfortunately, as time has moved on, the pendulum has more often swung to opposing extremes; for every mass lynching a comedian may take for cracking a gay joke on social media or saying the wrong word at a stand-up event to an audience of mixed people, someone invariably pushes the envelope a little farther. By now, perhaps, there is nothing sacred left to make fun of. Is that ok? I dunno. I’m not the expert in this field. But any joke that is delivered with some level of conviction is worth considering, even if it may be in bad taste. This is a genre of education just as much as it can be about escapism. “Movie 43” is about actors, directors and writers who have lost the ability to tell the difference and have surrendered to an abyss that is inundated with perverse excess. Tom Green would be proud.