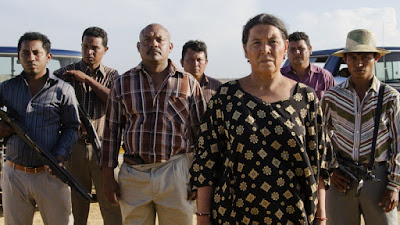 If we are to approach the material from Hobsbawm’s idea, that would imply the ways of the Wayuu tribes were a direct catalyst that drove them to this identity. That wisdom, while fascinating, does not match the more patient nature of Cristina Gallego and Ciro Guerra, whose film does not so much exploit the idea of self-fulfilling prophecy as it emphasizes the lurid values buried in western civilization. Yet it is an argument that has come up abundantly as the movie makes its way through film circles and become a prominent source of dissection, particularly for those who sense the philosophies of the Wayuu to be congruent bedrock for what we know as modern drug cartels. Do they not, in fact, hold family and property in the same rigorous esteem as those in the trade of cocaine? Doesn’t their tradition play like the quintessential road map? The same observers who sense those parallels could find adequate contrasts to “The Godfather,” about a crime world unconsciously reflecting the partisan behaviors of large Italian families.

Each suspicion contributes to the thematic tragedy working throughout “Birds of Passage,” one of the most striking and profound discoveries of the year. Yet its resonance serves to simultaneously contradict the Hollywood perception of South American drug culture, which usually shows up in film as a violent exchange between factions vying for control or influence. Here, native filmmakers have countered the trend with a movie that plays like a eulogy for their own decaying values, well beyond the cynicism or violence that is inevitable. There is a lot of the latter occurring on screen, of course, but the material is not focused on ambitious shoot-outs or close-ups of blood-stained faces; the camera simply spies casualties in distant fields, usually in periphery or unfocused, like a powerless onlooker sulking in the pathos. Think for a moment about how rare that is, especially in any story that is predestined to result in massacre. Would any studio executive had allowed Gallego or Guerra to make such a film, without the sensationalism? Would they have tolerated the camera frame cutting away from a fatal gunshot to instead focus on the face of the man holding the weapon? Here is yet another example of the jarring division between mainstream voices and the more obscure artists, who find much more meaning in the aching heart of the matter instead of the bleeding wounds.

The movie shows the process in a series of “chapters,” which play like verses in a gentle melody of tone and tragedy. The first scenes function with a more placid facade; Zaida engages in a celebratory dance, cloaked in veils and elaborate head-dress, while her would-be suitor joins in on the rhythms. This, we suspect, is a form of ritual preceding marital arrangements, like a formal sense of foreplay before the destined act. But his desires are subdued by the begrudging advice of elders who warn against contradicting the Wayuu’s customs. A payment must be made to Ursula before marriage is considered: it will include cows, goats and precious jewelry. This spurs the prodding of his mischievous cousin Moises, ingrained in a questionable family business, who tells Rapayet that nearby travelers are looking to buy marijuana from the locals. A visit to a ranch in the mountains leads to the first of what will become countless acquisitions of the weed, providing Rapayet with the means to buy what is requested of him. And before long he and his bride are producing heirs for an emerging enterprise.

By the time we return to their lives in an abrupt fast-forward, the new family business has obligatory created snags – primarily in Moises, who has grown unpredictable and arrogant as the customer base expands to involve more uncertain visiting figures (including members of a peace corps). There is a bleak scene that is a prophetic warning: after accusing some friends of buying from other sources, indicating betrayal, shots ring out in a display of violent madness. Bodies fall, then are stashed inside the planes they arrived in. Alibis are manufactured. Those who witness the bloody affair – the audience included – know this is a framing device for more, and conversations with family elders insinuate the necessity of eliminating Moises’ erratic hand. More shots are fired. Faces are replaced with others, who provide different (but no less volatile) approaches. There is a sense, especially by the third chapter, that core members of the families can no longer tell the difference between the old and new ways of the world – they are as ingrained in one another as the lifeline between relatives, who all have their own nature but are destined to walk a variety of paths informed by the customs of their heritage.

That the film witnesses this material with a quiet urgency is obligatory. What is not as expected, at least to outsiders, is the rich visual aesthetic it wields. Working from a production design and cinematography that are impeccably focused on deep colors and sharp long-shots, Gallego and Guerra create an elaborate tapestry that plays like a clash of extreme artistic dichotomies. This is the next step in an evolution that began with “Embrace of the Serpent,” also about old customs dying slowly in the shadows of modern cultural standards; while a myriad of these ideas wrestle within the mental spaces of the characters, sometimes with startling outcomes, they move through an almost dreamlike atmosphere that does little to cloak or obscure their secrets. Rapayet’s destiny, in a way, creates a chaos that the visuals are eager to exploit. That also means we are caught in a myriad of conflicting emotions in the final chapters, when families engage in monologues, chases, escapes and murder sprees that ought to overwhelm us in melancholy. Yet the film treats every scene so carefully, with such cautious scorn, that we watch on in the embrace of a kind of macabre beauty. Notice how the photographer, David Gallego, strategically places casualties at a distance in the frame, behind dust clouds or in the corners of foreboding caravans. Their fear becomes almost inconsolable, even unrelatable. They are now statistics in a cycle that will forever carry the tide towards more of the same.

If the heart of the film is how we put distance between ourselves and nameless victims of violence, its mind looks on suspiciously at how the two worlds contribute to the nightmare. So organized is the crime, so grandiose is the risk, that they might not exist in such a capacity without some deep heritage influencing them. Ordinary strangers would never bother going to such elaborate lengths to avenge others or protect their investments; their risk is informed by the insecurity of betrayals that are impossible to sustain otherwise. Make of that what you will, whether you subscribe to Hobsbawm’s philosophy or that of the screenplay, which argues that the old traditions are guiltless, however incidental. The certainty, as it was with “Embrace of the Serpent,” is that these are filmmakers who are restless with the concept of straightforward storytelling and conventional exposition. Theirs is an aesthetic that discovers the truth in remarkable silent passages, between the crude and the polished, and outside all notions of what a film with this subject matter ought to resemble or say.