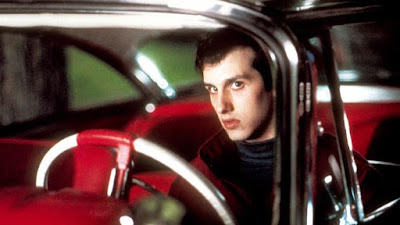 Some of that debt must be paid to his star, Keith Gordon, then a relative unknown face in Hollywood. Typecast early on as the nerdy schoolboy with some street savvy, his Arnie Cunningham comes to colonize the screen like force of nature gradually growing in strength. None of it is done without conviction; Gordon takes a rough character outline and adds a disarming humanity to it, all while holding himself back in the veneer of geeky uncertainty until the pivotal moment. How he transforms from that into a vessel of terror in the final scenes is uncanny. So, for that matter, is how well the writing paces his descent – each scene seems to build on a notion set by the previous, where an insecure nerd begins to project his hidden obsessions onto an old car sitting abandoned in a shabby yard. There is, moreover, a moment so startling in its delivery that it’s a wonder his co-star John Stockwell (playing Dennis) isn’t more rattled by the monologue before him, and the camera catches a view of a face that almost seems no longer human, but almost demonic with pale flesh concealing it.

Gordon’s skill was not one that would be implored much on screen over the years, although his deep understanding of the camera did make him a formidable director in a handful of instances – particularly with the very good “Waking the Dead,” about a mourning man who suddenly realizes his deceased soulmate is alive and well. Perhaps Carpenter is owed some of that gratitude just as much as, say, Brian De Palma, who cast him as a young sleuth in “Dressed to Kill” trying to solve his mother’s murder. Working with master filmmakers, one might surmise, lends credence to the notion of on-the-job training being an applicable substitute to academic education. But what of his performance, which seems to exist isolated and unique even in these times of frequent shows of insane scene-chewing? His inspiration may have simply been a consequence of overcompensating, particularly given that his primary collaborator was a car that could only rev its engine or flicker the headlights to suggest a shared sense of menace.

Which brings us to the premise. It’s preposterous. The opening scene shows the origins of that terrible car, on the assembly line of a Plymouth auto plant where it, apparently, causes the heart attack of an inspector who leaves cigar ashes in its seat. Flash forward years later, and it has now found itself in the possession of poor Arnie Cunningham (Gordon), who looks beyond the rust and tarnish and sees his salvation from a world that has cast him out. Does it possess some kind of internal power? Or are the cars owners/victims driven to their own demise by an obsession that is toxic and unwarranted? Your guess is as good as mine. What is certain, at least, is the bond Arnie creates with his impulsive purchase. He, too, feels like an outsider. The bullies at school, as ruthless as any that figure into a King yarn about adolescents, seem poised to push him beyond the edge of passive endurance. Then, just when his closest friend Dennis seems dismissive of his fool-hearted decision, a strange miracle: the car emerges fully fixed and polished, and on Arnie’s arms is the new high school catch Leigh (Alexandra Paul), who previously refuted Dennis’ come-ons. Does the car also provide its new owner with good luck?

We stew on these questions for the entirety of “Christine,” especially when the plot necessitates its deadly routine: the bullies trash the vehicle in a garage, it repairs itself before Arnie’s menacing eyes, and then goes on a nighttime spree of finding – and running down – the culprits of the vandalism. Is Arnie behind the wheel of these kills? It’s possible; the camera conveniently spies the incidents with tinted windows, obscuring any possibility of us knowing for sure who is driving. But that also undermines the bleaker possibility: if the car can literally repair itself, doesn’t it stand to reason that it can also drive itself? There’s some fun in working with this sort of mystery, but also some befuddlement. Consider the climax: after Leigh, now estranged from Arnie, and Dennis lure the car to a garage where they hope to demolish it, there is no doubt that Arnie is now in the driver’s seat. Is that his first time? Or is this a reveal to suggest that he’s been the culprit all along, and that the car’s horrific personality is just incidental. So rarely have so many questions roused this much frustration.

The true answer, it turns out, lies in King’s source material, which argues that the car’s evil spirit belongs to its previous owner, who loved it more than his own family (they, of course, died inside of it). Armed with that knowledge long after the movie nagged my brain, I revisited it again and instead focused on the skill of Carpenter’s filmmaking – and found it refreshingly steady. Even amongst so much corny and blatant disregard for logical certainties, he never looks askance at what is in front of him. The pilot buys his destination. Often, that rouses us to care more than we should, especially about the characters. It is clear, even moreso now, that poor Arnie was always destined to reach moral decay in the possession of his car, but Leigh and Dennis – both well-acted by Paul and Stockwell, respectively – convey a sincere agony for the downfall of the man they both once admired. Towards the end, when they have discussed the path they must take, there is no relief in what must happen, and even when there comes a moment that allows for the relaxing of their tight defenses, they seem to approach it more like a silent exchange of mourning than a sense of relief.

Could the movie be made now, in a time when irony and self-awareness run thin in a sweep of more literal explanations? It’s hard to say, especially given King’s continued endurance as a storyteller. His books remain hot sellers, with many classics even scheduled for new editions. New film adaptations of his novels, meanwhile, continue to populate conscious thought, and the recent remake of “It” has now surpassed “The Exorcist” as the most profitable horror movie of all time. It stands to reason that a premise like “Christine” could convincingly offer promise in a prospective reboot. Although one wonders if any of the car’s casualties might not snicker a little at the idea of dying at the wheels of a demonic automobile beforehand.