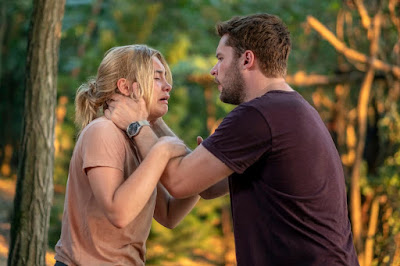 Aster takes a perverse delight in that prospect. Glance at any two minutes of “Midsommar,” and what you see is one of the most strikingly elegant masquerades of recent cinema: tense and bewildering, with a lush production design that ought to bely the more menacing insinuations. Photographed in the Swedish countryside, the film could not be any more convincing a travelogue of those soils if they had been orchestrated by Bergman or Nykvist. But lurking beneath those exteriors is, we soon discover, a world of traditions that require just as much chaos as they do a sense of order, and the movie’s key adventurers – a foursome of collegiate Americans on a week abroad – are too caught up in the hedonistic possibilities to detect the more obvious clues. Louder, more gory horror films have been made about this idea (“Turistas,” “Hostel”), but now comes an unusual marriage of cautious observation with twisted motivation. Imagine if “Picnic at Hanging Rock” were to become “The Wicker Man” halfway through the third act.

The setup. Dani (Florence Pugh) is sulking in the shadows of family issues when she is nearly crippled by startling news: her sister has committed suicide after a long bout with depression, and apparently taken their parents with her. This certainty is revealed in a sequence no less shocking in its delivery than the infamous car scene in the first act of “Hereditary,” although the characters never directly deal with it on-screen; Dani’s boyfriend Christian (Jack Reynor), attempting to keep peace with a partner he doesn’t want to hurt and friends who suggest she is nothing more than emotional baggage, invites her on a spontaneous trip abroad with them to Sweden, where the group plans to join Pelle (Vilhelm Blomgren) on a study of his culture. What that entails is less a descent into the unknown and more an immersion in something primitive; the village they come to is so removed from all notions of modern civilization that it’s like peering into a time capsule. Gatherings of men and women dress as if living in the 19th century. Passages of time involve dancing in front of bonfires, tilling long stretches of fields, and feasting outdoors in total silence. The strangers are barely regarded, as if to insinuate this invasive observation is common. But if that was the case, how come so little is known of the natives? Why are their customs so mysterious now in a time when information is more widely spread?

The movie moves through these suspicions in an almost dream-like hypnosis, without much conscious thought to the strange rules or boundaries imposed on the characters. Some of that is strategic for Aster, who keeps the key figures doped up for nearly the entirety of their journey; their heightened awareness distorts a perception of the world that would normally feel strange and alien, and almost certainly indicate dangerous outcomes. This is a technique that works wonders for some of the more shocking twists – like one involving Josh (William Jackson Harper), who decides halfway through to steal the village’s forbidden scriptures in order to amplify the thesis he is writing. When he is struck by a blunt object by an unseen figure in the darkness, it serves to suggest to the others (and us) that a villain is walking among the denizens. But later, almost casually, he has nearly been forgotten when a camera slyly notices one of his limbs protruding from the soil of a garden. Most movies would lull us with thuds of music and quick camera edits prior to the reveal; here, the shock is amplified by the film’s almost passive delivery.

So much of the film plays with our notions of factual account that there is great fun in determining what is authentic. One theory online suggests a breaking point in the reality of the film, at the moment when the adventurers first consume mushrooms and begin to wander through the long fields. This, the idea suggests, is the moment where they cease ever being sober and become transfixed to a hypnosis that keeps them detached from emerging threats. One moment that supports this notion is a visual trauma involving two elders and a cliffside – met with a resounding gasp of awe, Dani and her male companions nonetheless move quickly away from the supposed “tradition” of these people and lull right back into a trance, as if willing to accept them despite their radical ways. This continues well into continued problems, including the disappearance of Mark, who wanders off into the forest with an attractive female villager, and then Josh, after his night in the halls of scripture. And when Christian is singled out to become a potential candidate for village procreation, his own insufferable insecurities do not alarm him nearly as much as it should – which also sets up yet another shocking scene, in which he makes love to a woman while female elders chant in unison around a bed of leaves and branches.

The finale, on the other hand, shows little restraint. By then, those that remain alive seem solemn and content to accept their fates, perhaps because their own private lives have seemed like microcosms of a broader picture of violence and cynicism that seems more natural than they could once admit. I speculate on that detail because Aster only insinuates reasoning. He is a man obsessed with making the skin crawl. It does best for him to underline that with vast uncertainty, and of course that was one of the benchmark staples about “Hereditary,” which began as one film and trailed off into three or four others. For a follow-up, he has returned to the same aesthetic while marrying it to something more mainstream: the idea that terrible things can happen to people who are of the same social stratosphere as those sitting in the audience. Their fates seem relatable because their ideals – spoken or otherwise – play like reflections of a personal outlook, and their quiet pleading is like a warning against that which will come for us next. As a stamina test, the movie is as exciting as it is startling.

Yet what allowed “Hereditary” to cross beyond the sphere of instant shock value was the sincerity of the subject matter. Nothing occurring throughout Aster’s debut film was in the service of frivolity or humor; the film permeated the quiet desperation of people that looked deadpan at reality, with no room for a lighthearted exchange. In contrast, “Midsommar” is orchestrated from a stylistic pitch that feels too incongruent with material that otherwise feels showy and audacious, and everyone on screen is conveying themselves as if anxiously awaiting a gratuitous torture. Why pause on that? Why not adapt the production to the nuance of the material, instead of forcing it like a square peg into a round hole? Material destined for this much transgressive zeal ought to expose it in something more hyper-realistic. What thoughts can we offer the movie, beyond what is obvious? Aren’t the hairs standing at attention on the back of our necks not enough to explain the experience, without having to deeply analyze something that really doesn’t require it? The message, I guess, is to never develop a false impression of a world or culture when all the facts remain a mystery. Although the more cogent films never have to tell you that in the first place.