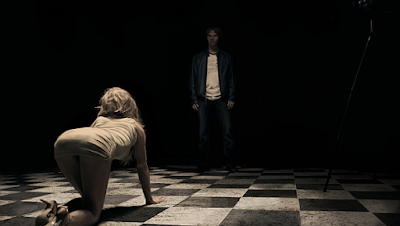 There exists a hard, bitter audience for the likes of “A Serbian Film,” one of the most graphic depictions of human suffering I have ever seen committed to the screen. I am not among them. Perhaps that is because I was trained in the more tempered observations of film directors who found horror in the ability to make you jump without expectation, or shrink into your seat while the notes of the screenplay played your emotions through equal measures of silence and dread. Shocking brutality in itself was never enough – it was only the final outlet of the terror, a reason we were so terrified by the idea of evil villains capturing those who were running and screaming in the opposite direction. But for those who will look at Srdjan Spasojevic’s nihilistic plea against the pornography trade and find it engaging outside of the nightmarish cruelty, I salute them: not only do they have the stomachs to stare back at the frames with deadpan focus, they also have the distinction of being the byproduct of irreversible damage to the senses. For that, those individuals earn both my astonished bewilderment and my sincerest condolences.

For so many of the modern viewers of extreme horror films, the likes of the classics – “A Nightmare on Elm Street,” “The Exorcist,” “The Shining” – must mean so little by comparison. Their art is eclipsed by the dated essence of their tension, modulated to what must seem like painfully dull proportions. In their absence rose a standard of chaotic evolution that gave birth to the likes of “Saw” and “Hostel,” in which the human body became an object of gratuitous slaughter. Some examples, to their credit, resonated beyond their technical implications when their ideology was sound enough; others – many, many others – simply existed as exercises in their own cynicism. But now we must deal with films so utterly reprehensible that they defy classification, as if they were formulated in a vortex that recognizes nothing of moral limitations and everything of the depravity running amok in our collective existence. The fact that this notorious little film from Serbia dares to exploit this trend with utter cognizance is the least of our concerns. The fact that it comes right off the screen with very well-made – and even well-acted – intentions only hardens the silence we choose to offer it.

The story is a straightforward one, but moored by negative energies lurking in the distance. The main character (we dare not call him a “hero”) is Milos (Srdan Todorovic), a former Serbian porn star whose old films are so famous that he has earned unending prestige – including with his loving wife, who yearns for more aggressive intercourse, and a young inquisitive son who shamelessly sneaks into his dad’s video stash for an education in sexual habits. Their relative ambivalence of that old lifestyle plays like a disconnect in recognizing Milos’ current dilemma: though he does not miss the career that made him famous, he certainly longs for the hefty income stream it offered. And just as that proclamation is voiced, an old female colleague crosses his path with an exciting new proposition: if he is willing to partake in the filming of one more film – a very important and “artistic” one, she suggests – then his financial situation will provide lifelong security to his entire family. But what could such a production entail for it to result in that sort of lucrative payoff, even for one mere actor? Though the questions exist mostly in the back of his mind, the money speaks far too loud for there to be much in the way of paralyzing skepticism.

Contracts are signed after gradual skim-overs. Questions are asked in passing. Long talks with his wife create a shield of justification for him to use on set. The film’s impassioned director Vukmir (Sergej Trifunovic) sells it as a watershed moment in Serbian pornography, an important economic industry that apparently depends on the wealth of foreign clients to endure in a competitive world. Their tastes are, perhaps, decidedly dangerous, and the early days of filming involve Milos being conducted through an underground odyssey of underage imagery and abuse towards women (the most shocking of the early moments involves oral sex being performed on him by one such victim, all while he watches a video of a teenager seductively eating a fudgesicle). To sense the anxious tone of these scenes is to recall the famous orgy sequence in “Eyes Wide Shut,” which too intercut very aggressive sexual content with a feeling of despair. Unfortunately for “A Serbian Film,” those scenes are the foreplay rather than the climax, and when the star begins to react apprehensively towards the material he is involved in, he is drugged by the director and forced into several days of very intense shooting.

To call the end result of their work a “snuff film” would be a gross understatement of the term, which in itself is a broad classification for the most extreme of pornographic content. Yet the movie, clouding the issue of its morality, presents the excursion in a novel way; rather than bear witness to each of the events directly, it shows the bulk of the antics in flashback after Milos has awakened from a lengthy blackout, attempting to piece together the events using digital tapes scattered across the director’s compound (this recalls “Memento,” about a man with memory loss attempting to solve the murder of his wife). What he sees projected through a small video window are moments that are unfathomable – some so shocking that to describe them in any capacity would make readers clench in disgust. But if there is further alarm to be had in just the mere reference of gratuity, it’s that most of it exists for a grander purpose than just the perverse exploits of its filmmaker. If we are to use the Vukmir character as a distant projection of the movie’s true underlying philosophy, then what happens to Milos – and the unspeakable things he undertakes – are acts that have a disquieting political subtext beyond their abhorrent nature. There is a key monologue in the second act in which those motives are conveyed transparently, and the performance in that scene is so on-target that it’s a wonder it doesn’t exist in a film with far more flattering subject matter.

What is Spasojevic’s point, at least beyond the visceral severity of his images? To be noticed in the world when you are known for nothing, I suppose, one must arrive at the heart of a bleeding wound. To him, and to his puppeteering antagonists, we belong to a world where we have lost the urge to feel, and the only way to attain it again is to pull back the boundaries between decency and barbarianism. Are these painful impulses evil? The characters orchestrating them don’t seem to think so; they have accepted the warped narratives as a means to attain transcendence in a very competitive adult industry. But their actions don’t bother playing with the scales of balance, either. There is no measuring stick for them to gauge a scene, only an urge to take a moment of suffering and ruthlessly expand on it. An added challenge is in watching the Milos character undertake so much of this without conscious regard, shortly after an on-set doctor injects him with a powerful serum to increase his stamina (one character describes it as “Viagra for bulls”). Violence, murder, attempted castration, beheadings, rape, torture, necrophilia and sexual assault on children all become part of the arsenal of performance, muddying the issue of whether anyone in the audience is supposed to hope for his redemption.

“A Serbian Film” is not a movie; it’s a laboratory of cold human nightmares that will forever be imprinted into eyes that cannot unsee them. If that notion only aggravates my ability to undertake the task as a film reviewer, then it the fate I deserve. There is no cinematic science precise enough to classify this experience, no sound criteria to measure its merit (or its moral code). A good variety of deplorable horror films of the past can be dealt with on a level of analysis, at least, because so many of them are badly made apart from their unforgivable motives. Think of how ugly “Chaos” was as a technical achievement, or how murky and shoddy “Orphan” was as an exercise in film editing. Those are slam dunks. The most divisive of ironies here is that Spasojevic simply refuses to capture his volatile ideas in the frames of something half-realized. It is a technical triumph, and certainly has the distinction of exercising patience when most products would simply cut to the chase. There is a rather staggering scene towards the end when Vukmir, half-beaten to death by his actor, stares at the screen and announces: “That’s it, Milos. That’s the cinema!” The question of the times – of which I can offer no feasible answer – is singular: how far is one willing to go to suffer for their art?

Author’s Note: “A Serbian Film” is not being given a star rating, because I believe it stands outside the catalogue of merit. It plays more like an event than a product, and should be considered based on the points made during the review.