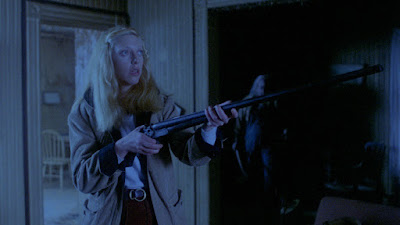 The unpleasant, dreary and humorless “Madman” is frequently cited among a handful of early 80s slashers as a genre standard, but it operates on one level that seems lost among its most loyal admirers: as a workshop for Darwinian selection. It was the great naturalist who first suggested the human race was the byproduct of centuries of inherent culling – that over time, a species was destined to conform to the environment it lived in while the inferior genetics would simply be forced to die out. One can argue a horror movie buried in the framework of the dead teenager standard always plays right into this theory, but rarely has it been so obvious, or indeed as unfortunate, as what filmmakers freely put on display here. The characters that populate the foreground of Joe Giannone’s film are suspiciously stupid, even by the measuring stick of his own premise. They barely function as humans, seeming lost in a haze of thoughts that are mechanical and uninformed. Their faces are frozen in confusion. They engage one another like they have no sense of individualism. Their dialogue is forced beyond comprehension, as if assembled by frequent trips down the greeting cards aisle of the Hallmark store. And that of course means they will be ill-prepared when they are required to react during a confrontation with a local legend, a deceased farmer who has returned to form to do away, I guess, with anyone that wanders into the woods he used to live in. Is he a maniac at all, or merely a soldier for evolution?

A more optimistic sort would see underlying value in these details. Some would even argue the intentions of the director, perhaps suggesting that all of this was intentional to rouse a laugh or six out of an audience keenly aware of the miniscule intelligence quotient. In some regards we can accuse more famous slashers imploring the same technique, as was clearly obvious by the bulk of the “Friday the 13th” franchise. But there’s nothing remotely fun or enjoyable about the experience of “Madman,” which misses the opportunity to exploit unlikely punchlines and buries its situations in a compost pile of muck, boredom and insufferably miscalculated technical merits. One does not participate in the observation of a mere film here – we play as eyewitnesses to a shoddy biological experiment that does not favor humanity or its fragmented mental capacity. During the moments I should have been laughing (however unintentionally), I was instead questioning the competence of those snickering behind the camera.

The cast plays like a mortuary of former teenage casualties in slashers. A group of them assemble in the early scenes by a campfire out in a remote wilderness, where an aged camp counselor regales a cluster of younger “gifted” students with frightening tales of a local legend. Known notoriously as “Madman Marz” by those who knew him, he was an old farmer who snapped one cold night and murdered his entire family in cold blood, and when townsfolk discovered his misdeeds they hung him by a tree. Unfortunately, when they returned to the scene of his execution the following day, his body – and the rope – were missing, thereby creating the implication that his vengeful spirit might still wander the woods in constant pursuit of new blood to spill. Needless to say, the teenagers react in opposing fashion: some are grossed out by the story, others humored. And that inevitably will lead the most curious one of the bunch to wander off into the woods to see what he can uncover, ultimately leading him into a rickety old abandoned house that not even cockroaches would be brave enough to descend on.

The others occupy their time between the obligatory brutal slashings just like typical teenage bait: by drinking, telling lame jokes, playing pranks, arguing superficially, getting lost and having sex. The most perplexing quality of “Madman” is how it stages some of these devices. The director doesn’t even seem to know how people are supposed to interact; their gazes show discomfort and insecurity, as if consciously aware that a camera is in the room. There is a sequence of intercourse in a hot tub so badly framed that it resembles one of those old 1970s sex education videos from sixth grade, bad overdubbed music and all. Another scene, of a brunette wandering the woods before discovering a body with a severed head, makes a huge mistake by zooming directly into her immediate facial expression – she looks less shocked by murder and more worried about escaping a shoplifting charge. Much later, there is another moment in which another girl runs through the woods after observing the figure of the madman remove a body from near a truck, and her escape is confused by the film’s inability to provide her adequate lighting and coherent camera shots.

Where does she go, exactly? How far away is her boyfriend, whom she rushes to after witnessing the violence just a moment before? Like the idiots they are destined to be, their primary instinct is to return to the scene of the crime and calmly attempt to start the vehicle, just before they discover a severed head resting near the engine. And of course one of them will be popped off while the truck is moving by a grotesque hand reaching from around the open window, and of course the truck will crash so that the survivor can run back towards the cabin, hopefully to alert the one remaining counselor of the impending danger. But when she is discovered by said madman and nearly ambushed at the door of the office, what do you think she does in order to avoid being found? She throws all the food from the fridge on the floor and hides inside it, of course!

There is one good scene early on that shows a sense of promise. After the curious teenager has thoroughly gone through the abandoned house searching for clues to the legend he has just heard, his eyes catch the sight of a rough figure moving quickly across a nearby field, inevitably rushing off to murder the teens who have called out his name. For the purposes of narrative foreshadowing, the moment is far more effective as a setup then, say, Jason Voorhees emerging from a lake wearing a hockey mask, or the Chucky doll smiling sweetly before his menacing eyes blink. Those are ploys that mean nothing because they no longer offer mystique, even though the movies they belong to are rarely interested in such values. Perhaps a different, more skilled filmmaker might have done something with this moment besides creating a vague hairy blob to constantly whoosh past the camera. Alas like all the movie’s other dubious achievements, the villain himself scarcely earns his title; he is more like a force of nature than a legitimate homicidal killer. Does that require an explanation? Not exactly. But it might have been nice to pit him up against victims who could have, at bare minimum, put up a fight that required logic, foresight or some quick reaction time. The silver lining: with these specific dimwits constantly showing up dead, at least human intelligence is destined to endure in the passing generations.