"The Cabinet of Dr. Caligari" Revisited

“A reminder, and an example, of how today's filmmakers have forgotten about the overwhelming influence seductive imagery can have on an involving story.” – taken from the original Cinemaphile review of “The Cabinet of Dr. Caligari”

Movie horror began not in the minds of Hitchcock or Castle but in the menacing gazes of early German cinema. Robert Wiene’s “The Cabinet of Dr. Caligari,” usually accepted as the first prominent excursion of this distinction, was filmed and released in 1919 against the trajectory of its time, when those elusive few who actually saw films ought to have been far more enamored by the unsullied awe of moving images. What could have driven a single mind behind the camera to abandon the trajectory of his peers and dive headlong into a world so cynical and haunting, especially after many of his early films – now thought lost – contradicted that impulse? Having just been subjugated by more dominant European powers after the First World War, it was the country in which artists freely abandoned the beckoning of idealism and plunged head-first into the dark corners of the human psyche, effectively creating the tormented soul of German Expressionism. And while conventional wisdom suggests that such a compulsion inspired an uprising of dangerous political minds, it can also be credited with writing the language of the most celebrated of all modern film genres, a categorization of pictures made famous by the prospect of instigating fear the hearts of the audience.

Nearly 100 years later that volatile field continues to weather divisive perceptions of avid moviegoers, ranging from dismissive soundbites to shocked gazes to deafening applause. In some way that trend reflects the trajectory of its most famous blueprint, a movie that was made cheaply, beyond higher influence and by men who were essentially underground artists gifted with film equipment; it was not a well-received endeavor when it first appeared through a projector, and even those who found it fascinating were confused by the puzzling narrative structure. What they hadn’t realized – at least initially – was that Wiene and his technical artists were prophesizing the arrival of the psychological narrative, in which specifics were clouded by strategic uncertainties in order to inspire discussion and debate. Furthermore, they were also unconsciously carving a laundry list of firsts into the proverbial wall of filmmaking rules, including the famous movie device in which characters in an insane asylum can never be looked at as dependable witnesses. Any serious student of cinema will come to it not merely in admiration of the material, but in intellectual sensation – they will instantly recognize that it was the earliest visualization of an on-screen murder, the first to show a mad doctor look deviously over his eyeglasses, and the first to contain an inconclusive ending that may – or may not – entirely exist in someone’s mind.

In more existential ways, the movie also defined the twisted relationships of filmmakers and their homicidal characters. It becomes one of the first things that emerge during the story’s rather brief setup, which doesn’t so much create identities as it does foreboding situations. The setting is Holstenwall, a remote village nestled somewhere in the mountains, where a strange man appears at the local carnival in order to shamelessly tease the possession of a great earthly wonder. Known enigmatically as Dr. Caligari, he swings an oversized bell on the corner of the street and announces ownership of a “Somnambulist,” a man – or perhaps a creature – who has been asleep most of his life and awakens only for the sake of telling the future. By the luck of the eager eyes of Holstenwall’s ordinary civilians, “Cesare” comes to life under the spell of his owner, and is asked a question by a man that foreshadows every idea of the plot: “how long will I live?” Cesare, during a methodically slow gaze, replies: “until the break of dawn.” Movies of later eras would see the dialogue as a red herring for other agendas, but in the early 20th century directors knew little of those sorts of games; the words take on a very literal meaning in the film’s most influential scene, a shot of silhouettes struggling in the night as a downturned knife is used to commit murder.

Who caused poor Alan's death? Does the slumbering soothsayer know more than he lets on, or is he really a prophet with only clairvoyant association? What is Caligari’s motive or role in this tragic turn of events? The movie cares not so much about answers as it does about creating ambiguous vacuums for the situations to nest in. The townsfolk are sent into a frenzied panic after news breaks of the homicide. Another shows up murdered, strategically done off-screen. The legal authorities, desperate for some form of justice, assume responsibility falls on a random stranger luring around town, and they lock him up for the crimes without just cause. But then added suspicion falls on Cesare when Caligari’s consistent presence implicates them in the killings, leading to a scene in which the sleeping monster awakens, kidnaps the girlfriend of the apparent hero and drags her recklessly through town before being chased off by the police. Of course, being a silent film uncertain about conventional trajectory, none of this occurs with solemn conviction; often the body language reflects a heightened sense of hysteria that resembles violent convulsions, and faces appear as if traumatized by horrors that can never be unseen.

If Wiene was only following the pattern of his peers in forcing the actors to convey such emotions so vividly, he created dual advantages by having them react in the foreground of such a menacing backdrop. Here is a town of sharp angles and jagged structural dangers unlike anything ever seen up to that point, a visualization so bizarre that it didn’t seem to belong to any tangible reality other than a living nightmare – no doubt an intentional maneuver on part of artists who sought to emphasize the interiors of a splintered psyche. Many of the details call on viewers to reason with the tight dimensions of buildings and roads, and with good reason: so many of the scenes are shot with an ambiguous perspective, clouding the certainty of where actors are standing or how far away the action is taking place from the camera. Among a plethora of modern artists most directly influenced by this sort of visual maneuver – many of them in animation – Tim Burton emerges as the most famous; Holstenwall’s angular structures play as early concepts of what one would come to see in the likes of “Beetlejuice,” and Cesare almost certainly appears to be an early prototype for Edward Scissorhands. A casual observer might regard such images as crude and primitive slapdash, but enthusiasts of Expressionism know that such settings are easily the most important piece of the puzzle – because these worlds exist to instigate a feeling in the eyes, while stories are in the service of movement and heroes are merely incidental. 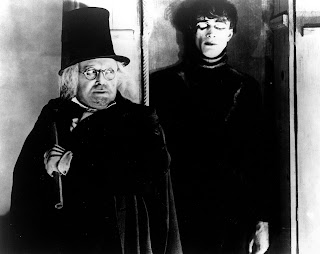 The most captivating trait of Wiene’s cautious descent, perhaps, comes in the form of a climax that has become the staple of hundreds of modern thrillers. It involves an account of events as told from the closest witness to Caligari’s crazed spree of chaos, who goes to investigate the deeds of the mad doctor and discovers – quite unexpectedly – that he is the director of the local insane asylum. The title cards offer an investigation into his elusive journals, and they tell of his crazed pursuit for a sleepwalker, who may or may not be led to kill under the ruse of mind control. But then the movie splinters into a sequence that unravels the certainty of those observations; roles become twisted as if being ripped apart by a psychological kaleidoscope, and characters are seen in situations that literally collapse under them, leading to a final shot with no clear victory other than confusion. Though the concept will not be anything new for those well versed in modern thrillers, seeing it in a movie made during less mentally intrusive times offers its own challenge. Who did these people think they were sticking their noses in places they didn't belong? What gall did they have to leave something so open-ended, especially in a medium that should have enriched an imagination rather than undermine its sense of perspective?

Those less hypnotized by the film’s ancient enchantments will discover, at least, added intrigue on the most recent Kino DVD release, which supplies Wiene’s opus with two soundtracks: a classic orchestration and a modern one composed by Rainer Viertblock. The more traditional music underlines the art of the material, but it is the other – far more piercing and harsh – that escalates the film’s tone, providing it a more thoroughly modern consideration of the subject matter. That becomes necessary, I suspect, based on the conventional perception of silent films in current times, when the visions of the past are usually scrambled by the cynicism of less patient eyes. To that degree, Viertblock’s score provides “The Cabinet of Dr. Caligari” an injection of relatable insight, and the material gains a sense of mystique that rises above its old images. One might even argue the necessity of those sorts of revisions for a handful of important silent works, particularly others cut from the Expressionist cloth. Would “The Golem” mean something more to a viewer, for example, who is observing it in the context of a more urgent soundtrack? What of “The Hands of Orlac,” which might take on added gravity if guided by more contemporary orchestration that doesn’t reduce its biggest frights to coarse blobs of suggestion?

The significance of these musical changes emerge not from a feeling of displacement, but from our desire to better comprehend the meaning of filmmakers whose view of the world now seems inaccessible; they come alive when opposing ideologies are bridged by informed artistic contexts. “The Battleship Potemkin,” one of the greatest of silent epics, found immense success at the turn of the century by undergoing such a musical revision. Fritz Lang’s “Metropolis” garnered waves of new enthusiastic fans years prior when it was re-released with a score written by Giorgio Moroder, one of the architects of the disco movement. Though it remains to be seen how a film like Wiene’s classic will fare in the slog towards technical desensitization – especially for the genre it helped to discover – one thing I couldn’t deny was the unnerving feeling that overcame me as I watched it with this new soundtrack blaring through the speakers. In the thick of these musical chords is the voice of a conductor who looks at Caligari and his henchman as monsters who have awakened from a slumber, eager to agitate a generation of minds who have yet to discover their gloomy impulses. 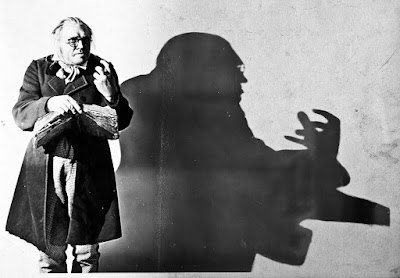