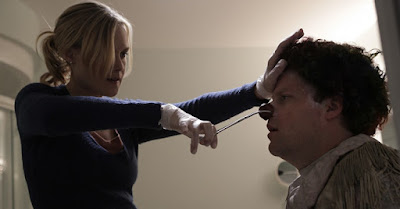 One of the tragic realities of horror movies is rooted in the cause of sound moral judgment: a story in which very young children are destined to be slaughtered is rarely deserving of redemption. Varying degrees of that estimation have been seen on the big screen over the years, ranging from minor offenses (“Pet Semetary”) to more garish excursions (“Dinocroc”), but only those that move to the metronome of a compelling perspective can bring those sorts of risks back from the brink of despair. Jon Watts’ “Clown,” recently released after lying dormant in a studio vault for over two years, does something even more unforgivable: it goes well beyond sound psychology and hammers its point right to the spinal column of senseless and graphic cruelty. Thoroughly strange and shocking, the movie tells the story of a man who puts on an old clown costume and discovers, quite unfortunately, that it once belonged to a horrific demon known for devouring children, ultimately cursing him to the fate of possession. Meanwhile the movie exploits the nature of this idea by shamelessly dangling young victims in front of his ravenous face – the first of which is a 4-year old boy, who is so fascinated by the clown before him that he mistakenly attempts to make friends by barging through the front door while running buzz saws are set up the living room. Any further contemplation of this particular scene isn’t just grotesque, but vehemently depressing.

But of course, by then, one is left to wonder how anyone watching is not already turned off by the material that precedes it. Clowns have always had an eccentric history in the perceptions of the populace, perhaps deservingly; some regard them as carefree avatars of cheeriness and joy, while others – including myself – see them as menacing facades for something more dangerous. The movies have certainly exploited that fear over time, and the famous “It” stands as the most famous of that relentless argument. What are enthusiasts of those sorts of vehicles, however, supposed to feel when they see this film, which sidesteps the psychology and focuses predominantly on the violent streaks of a monster while he murders and then cannibalizes a handful of pre-pubescent boys and girls? There is no reasoning with this thesis because it has no time to even formulate a persuasive argument. In the era when context means everything, “Clown” makes the fatal mistake of believing its audience just doesn’t care about one.

The movie opens during the birthday party of young Jack (Christian Distefano), a boy with bright and inquisitive eyes whose sole wish is to have himself and his friends be entertained by the appearance of a clown. Unfortunately, his mother Meg (Laura Allen) takes a call early on in which a party organizer cancels the appearance of the one she hires; in a mad dash of panic (and in between conventional dialogue about clown phobias), she phones her husband – an accomplished real estate agent named Kent (Andy Powers) – to assist in correcting the issue. Should he hire someone else? What alternatives must there be? His befuddlement translates into rummaging through the belongings of a former property owner at a vacant house, which conveniently leads to the discovery of a clown costume buried in its closet. Fearing nothing but the disappointment of his young boy, he puts the costume on, returns home and turns the ambitious birthday into a major success.

Most movies in which objects carry uncertain energies typically offer us indication in the form of visual or musical cues. “Clown” is uninterested in foreshadowing. Instead, what it does is speed through the process a buildup in order for the characters to discover, completely on whim, that the costume itself harvests a strange hold over its host. Kent is unable to remove it. When there is an attempt to cut it off, he instead slices open his wrist. The wig, also stuck on, rips at his scalp when he puts force on pulling. Later, when Meg attempts to remove the clown nose, it causes enough of an injury to inspire a doctor’s visit. Meanwhile, the makeup itself – washed off in consistent intervals – gradually comes back onto his face. Briefly there is a scene with family members that implies potential mental uncertainty: is all of this really happening to Kent, or is it all part of some elaborate projection put on by a guy who no longer can see reason? Their interactions come to a head in a moment when he makes contact with the proprietor of a costume business that first sold the outfit to its previous owner, which then leads to an exchange of supernatural reasoning and an attempt to behead the host of the devilish ensemble.

On and on and on the movie rolls, parading Kent around in various stages of dismay while the costume gradually takes hold of his body and mind. As his appearance changes, so do his behavior patterns – the most frightening of which is his relentless hunger, which is stirred further by the mere presence of a child walking into the room. Ordinarily this detail would simply be utilized as a device to propel the tension of the situation (and rightfully so), but director Jon Watts goes an unforgivable route: it sacrifices the nameless young faces as a means of emphasizing the nature of the beast within, and often rather vividly: one is bitten and his guts are seen splattering onto a television screen, and another is consumed at an indoor playground, where his blood cascades down a plastic slide and into the ball pit. Some part of a fair moviegoer wants to reason with these details if a story is interesting enough to be worthy of gray areas. This movie, however, volunteers nothing beyond surface implications, which only adds insult to the depravity of the death sequences. If Watts’ agenda were more about suggesting the evil nature of the costume, other routes are more effective. There isn’t even a sense of restraint that might have suggested he would prefer accomplishing these events off-screen, and that only turns the reality of his story into a sad, loathsome exercise of priorities. Eventually it even undermines the observations of the more sensible characters, including Kent’s caring wife; when the demon clown demands one more victim to free her husband from the costume’s hold, she is so insistent on his redemption that she… actually thinks about complying with the request?

The cruelest irony of this all? The clown itself is a work of sheer artistic genius. No doubt modeled after the look of Tim Curry’s classic “It” villain, Andy Powers effectively disappears into the visage of a rather menacing and believable villain, who by the final scenes emerges as one of the more haunting visions of antagonism of recent memory. The last shot is as striking as any of the key reveals of notable monster movies of the past, and the movie at least possesses the wisdom to know that you only offer full reveals towards the end, after all other avenues have been exhausted. But what point is there in any of it if everything before is so mean-spirited, even by the nature of a pathos-driven horror film? How are we supposed to care when the screenplay rushes right through the material, refusing to contemplate the psychology? What are we to make of the legend of the evil clown if the actors embodying the observers are acting to the rhythm of badly modulated violence rather than an ordinary human reaction? As far as I’m concerned, two years of shelf life for this monstrosity was far too generous a punishment.