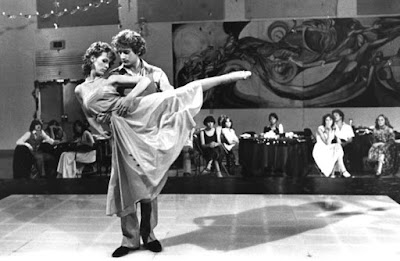 I am often amazed at the foolish tricks of absurdity that filmmakers play on their audiences, some of them so obvious that even lesser minds can see through their clichéd reasoning. Think for a moment about this predicament and then dial your mind back to “Prom Night,” one of the early slashers of the 1980s. Here is a movie about a group of kids who wander into an abandoned building, play a rather vindictive game of hide-and-go-seek and then spook the youngest girl into a situation that causes her accidental death. Surprised and dismayed about their situation, the remaining four swear an oath to never speak of their involvement in her fall from an upstairs window, and venture back into their ordinary lives in total silence. The camera briefly spies a shadow standing over the girl’s body to suggest a living eyewitness, and then abruptly advances six years to revisit the participants as they are preparing for their high school prom. Each of them receives an ominous phone call: a voice on the other end offers low growls of doom, and a hand is seen crossing their names off on a checklist. And somehow the audience is expected to believe that all four kids – some of them likable – could actually walk through life for this long without ever confessing their sins, or that their one witness has the patience to wait to a single moment so many years later to exact revenge on them.

A premise this flawed might be inconsequential in the moment of a cheap thrill, and yet the underlying current of “Prom Night” is not exactly a forgotten gimmick. Essentially carving a path for a handful of more modern horror vehicles  – including “I Know What You Did Last Summer,” the film’s most direct cousin – there is a prominence in the suggestion that spectators to tragedy (especially if it exists close to them) is the conduit for a destructive mental snap. In some, you would expect that to amount to something substantial. But this isn’t a movie that wants to contemplate those details deeply enough for them to matter; what we get instead is one of those all-too-familiar exercises in death and dismemberment that casts a murky shadow on the psychology of the idea, inspiring us to pick it apart until nothing is left but a shell of prevalent inconsistencies. How the endeavor has survived so long in horror film awareness suggests a remarkable loyalty on part of the fanbase, most of whom no doubt lent the same courtesy to other mid-tier slasher films like “Friday the 13th” over the years when it wasn’t exactly needed.

The aforementioned situation is aggravated by details in the side pockets. After poor young Robin is found deceased on the grass by her grieving father (Leslie Nielsen), the family holds vigil over her grave in what seems like a routine procession: the mother (Antoinette Bower) sobs quietly at the head of her gravestone, while Robin’s siblings Kim (Jamie Lee Curtis) and Alex (Michael Tough) watch on in earnest, silently sharing in the grief. While that notion has crippled poor Alex to the point of social awkwardness and violent tendencies (at least towards bullies), Kim has blossomed into a fairly active teenager, and prospects of being the prom queen have only fueled her drive. But here’s the kicker: her boyfriend Nick (Casey Stevens) was one of the four present during the death of her younger sister, and she also keeps friendly company with Jude (Joy Thompson), who resists the urge to feel guilt by always allowing herself to be pursued by a smooth-talking chubby nerd (a cute scenario if not forced as a diversion). Meanwhile Wendy (Eddie Benton), the ringleader who swore all of her friends to secrecy six years earlier, ogles Kim like a mean girl with an axe to grind (oh yeah, she’s also Nick’s jealous ex-girlfriend), and poor shy Kelly (Marybeth Rubens), the only girl who consciously seems to be contemplating her lie, spends a fair amount of time thinking about giving her virginity away to an aggressive boyfriend after the dance.

These four are destined to be stalked, tormented and murdered brutally by all the obligatory rules of slasher films, and director Paul Lynch is only all-too-eager to set them off on a course of total convenience. That he borrows suggestive elements from “Halloween” and “Carrie” certainly propels this momentum – including an arc in which a smooth-talker modeled after the John Travolta character in De Palma’s film is replicated for the sake of creating a subpar side villain – and the performances of the young stars are pitched at a level of cheerful ambivalence. Others amplify the underlying hysteria of the stalker’s game, including a mute janitor that always looks suspicious (at least towards the judgmental teenagers), and a police officer (George Touliatos) who suspects a new string of murders occurring around town are the result of an escaped sex predator, who was accused of young Robin’s murder years before and was disfigured during a police chase. Does that explain why the killer shows up in the last act wearing a mask, we wonder? Or is the mask a ploy to throw us off the scent of something else – something much more shocking?

At one point maybe these questions actually amounted to something for the audience. The entirety of “Prom Night” is clichéd and absurd, but it’s at least well-made; the camera has a reliable synchronicity with all of the familiar slasher elements, and the pace is much more leisurely then it is frenetic, allowing for more careful scene setups and tension-building. But do I hold it to a standard of the times or to the one that informs my present awareness, when all of these narrative details have gone past the point of silliness and become exhausting? However you choose to deal with it may come down to the amount of cynicism you possess in dealing with old horror movies. A great deal of them are bad, yes, but some with mediocre intentions have the capability of rising to a level of charm if their aim is to only consider the four walls of their closed world. As I came to the movie for the first time in a very recent marathon of classic horror pictures, I was baffled, aghast and left overcome with insurmountable eye-rolls. But I was never bored.

A significant part of me misses the more simplistic aims of those times. Horror movies were abundant and elastic, and a great many freely stole their ideas from more credible sources, but they weren’t always weighed down by the cynicism of their concepts. Think about a premise like this, where the goal is to simply be deadpan (if ridiculous) in the midst of tension, and then contrast it to “I Spit on Your Grave,” also from 1980, where the horror was undercut by a tone of cruelty that robbed us of the ability to have a good time. Had the makers of that picture known their pitch would evolve into the norm of the bloodiest of more recent genre vehicles – none of them with any piercing psychological subtext – maybe they would have felt a responsibility in taking lighter roads. Paul Lynch sought no deep reasoning when he opted to make one of the many familiar entries in the emerging dead teenager subgenre that rose to prominence after “Halloween,” but it is clear, at least, that he wanted to make something in the tradition of old Hollywood Saturday matinees: a film that was simple and entertaining, albeit implausible in composition. And hey, when you go that route without having the obligation to tack on shameless gratuity or morose exercise, who are we to do anything but nod in admiration?

There is nothing remotely absurd about the premise of Prom Night. As for the perpetrators going through life without ever confessing to anyone...I thought modern thought was all about the moral ambiguity of our species...that people are neither good or bad, but just indifferent blobs hoping to feel as good as possible while they wait to die. This conduct fits right in with that notion. As for the killer waiting to exact retribution....he was a little boy when it happened. Now, 6 years later, he's a strongly built young man. Much easier to swing an axe under these circumstances. Prom Night is one of the top 3 slasher movies of all time(along with Halloween and Friday the 13th). One of the greatest films of its' kind ever made. It was made during a wonderful time when filmmakers just did what they wanted...they weren't terrified of people like yourself. Today, inexplicably, they seem to be precisely THAT...scared to death to make a decisive move in any direction, for fear that someone, somewhere, might mock them. That's why nothing good gets MADE anymore...and why people like yourself look back on the 80's in disbelief because back then nobody cared what you thought...I can see why you would find it so unsettling...