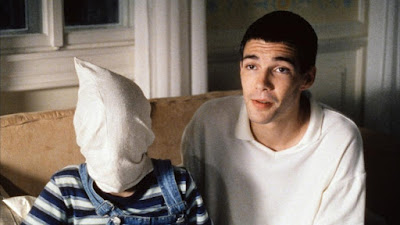 The docile family that wanders out of civilization and into a wilderness where they are fated to be stalked and tortured is one of the more prevalent recurring themes of horror films in the modern age, but so few of them make the effort to pierce the membrane in order to revel in the warped ideologies of the villains. Michael Haneke’s “Funny Games,” a harrowing film, is of that latter sensibility. Audiences inclined to assume the most sensational possibilities are apt to descend into the director’s odyssey fully expecting the most perverse of geek shows, but what they will emerge with is far more rattling: the acknowledgment that seemingly ordinary people from a wealthy class system are capable of causing indescribable harm on others. We don’t just speak of physical harm in the conventional sense here, either; aside from bodily threats that generally lead somewhere unexpected and startling, the movie possesses intimidation, verbal cruelty, pranks, jokes and mind games that have all the characteristics of a sociopath’s behavior – they involve rules made only to satisfy the culprits, because that is in the nature of their game.

So many scenarios would play out in such a way as to betray the audience’s patience, or at least take them beyond the means of tolerable extremism. The most interesting aspect of Haneke’s production, as nihilistic as it is destined to become, is that the film never exceeds those limits. There is an ample amount of screaming, fright and downright brutal violence, and the actors move with a fatalistic precision that makes them into pawns for an overreaching theme of despair. But so much of it is elevated to engrossing observation because it is a movie that takes these ideas seriously, not as tools meant to turn a stomach. As a cinematic breakout for a man who would become a reckoning force of psychological observations in the last 20 years, it is also the first of a handful of endeavors that illuminated the relevance of Haneke’s jarring audacity. Few directors of the modern class have been so driven by the deplorable deeds of ordinary man, or divulged their cruelty in such a perceptive manner.

The story deals implicitly with this cruel paradox: who is there to turn to when you are the victim of cruelty in a social circle that sees no menace in the boiling pot of their closed world? That is a question best explained in the observations Haneke makes of three people: George and Anna (Ulrich Muhe and Susanne Lothar), a loving couple on their way into the country with their son Georgie (Stefan Clapczynski) for a weekend of common indulgences: tennis, boating and drinking. Their journey towards that destination is occupied with common passages, where idle chit-chatter is occasionally punctuated by a game of naming musical compositions over the stereo. And along for that peaceful ride is a family dog, whose own instinct to bark at danger serves as obligatory foreshadowing of what will likely transpire in later scenes when villains will cross his path.

Those villains – a pair of young and talkative socialites in tennis garb – are Peter (Frank Giering) and Paul (Arno Frisch), who wander onto the family property for seemingly lighthearted dialogue with Anna. One asks to borrow two eggs for a party; she offers them and then becomes mystified by his clumsiness – a trait that, strategically, also results in her mobile phone being accidentally dropped into a sink full of water. The other plays around with her husband’s golf clubs (without permission) and aggravates the interaction further. When she asks them to leave, their kindness turns into a pleasant diatribe of threat. Georg and their son arrive home and are at first confused by the growing hostility of Anna, but quickly sense the source after the continued interactions become interlaced with mean jokes and confrontational arguments. Their refusal to leave inevitably turns into a violent parade of impulses, which is exactly what they count on – for the mentally deranged, fear is an aphrodisiac and disobedience represents the dislodging of a cork of modesty. When there is a moment in which one of the antagonists turns towards the camera and winks at it, the audience knows it isn’t just being strung along on a baseless game of nonsense.

Yet the games themselves aren’t the sort that you would see in any number of countless violent horror films. There is some level of physical cruelty inflicted in routine intervals, but the screenplay and the direction choose to use it as an exemplification of thoroughly explained principles, however warped; often we are listening to twisted reasoning in monologues that establish a context for the bloodshed, even as some of it veers into the shadows of insanity. Consider the dialogue of the characters in a critical moment involving a loaded shotgun. “Why don’t you just kill us now?”, Georg asks his captors. “Because we would be deprived of the entertainment value,” one explains. Haneke uses their violence interactions as a method in dealing with more relatable facets of the human existence – primarily, the implication that what these sadistic kids are doing isn’t all that out of character with their social standing, especially in an era where violence and gratuity are accepted into culture with little restriction and even less relevant perspective.

Had the film progressed continuously with this volatile suggestion, it would have been enough. But the screenplay (also penned by Haneke) knows that a sociopath’s mindset doesn’t always rest in the doldrums of routine, either. There are two specific incidents in the latter half that, even in the context of this nightmare, are completely unexpected. The first involves a shootout that occurs almost entirely off screen; when the camera ventures back into the room, it refuses to offer close-ups, perhaps because the end result is too shocking to deal with that closely. Even later, during a moment when the verbal taunting between Paul and Anna results in a rather alarming twist of fate, there is a moment where one of the characters reaches for a remote and literally winds the film backwards – this is a dramatic device that is used as a painful reminder of the lack of rules in sociopaths, especially when it comes to dealing with impulses that don’t play in their favor. And the ending – of which no one will find all that optimistic – is yet another brutal reminder that Haneke is not here to play into the audience’s desires. He means business.

The conventional wisdom of horror films is that most terrible deeds must exist in a universe destined to balance them with relief or justice. Less optimistic ones will not linger long enough to pacify the tensions of the viewers. A great majority of the latter tend to be sad (often deplorable) experiences because there is little purpose to them beyond the director’s arrogance in inflicting pain and discomfort, sometimes in very visual ways. What is most satisfactory about “Funny Games” is also the most ironic: it is a movie with one of the most extreme messages I have ever seen, and yet one where the visualization of the cruelty is remarkably restrained. That’s because it has deeper agendas to consider, and not ones normally viewed with deadpan scrutiny. These are not idiots – they are methodical tormentors. The victims, frequently seen nursing wounds, are too removed from a thorough world awareness to see a broader context; all they care about is basic survival. Towards the closing scenes there is a moment where Paul and Peter exchange opposing looks (and even some hostile dialogue) after walking away from their cycle of torture. It turns out that fundamental disagreements mean nothing when every waking moment is occupied by sadism.

Produced by Veit Heiduschka; Directed and by Michael Haneke