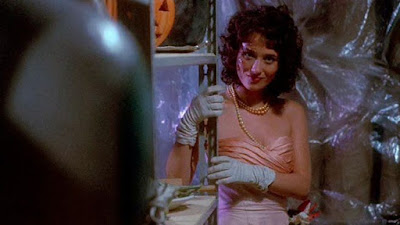 Mary Lou isn’t some innocent teenage girl caught in the throngs of high school lust and deception: she’s a vixen preordained to be one of those homicidal sorts frequently seen in mainstream horror movies. Or at least that is what the early trajectory suggests in “Hello Mary Lou: Prom Night II,” until a disgruntled boyfriend tosses a lit stink bomb down the rafters and sets her on fire, forever cursing her to an afterlife without a prom queen’s crown. But as is the virtue of any living force destined to undo the happiness of others, goals so devious are only delayed instead of thwarted. And though it takes nearly 30 years of death to recharge her vengeful spirit, inevitably she will return to the sight of her demise and exact justice on others, whether they were participants in the tragedy or not. Audiences come to expect that sort of excursion ad nauseam in these sorts of pictures, but for a sequel that follows the footsteps of a rather ordinary teenage formula, what would have been the harm in changing it up a little? The scene of her death is so frustratingly passive that it creates rather persistent paradoxes: no one standing at the site of her demise seems eager to show the slightest interest in rescue, much less mere shock. Perhaps it would give too much credit to a teenage mind, but if I was killed in a fire and all of my classmates just stood by and watched me become a cinder, you can bet that every last one of them would be high priority on a revisit list the moment my ghost form returned to reality.

Alas this is not to be the case here, in a movie that would rather victimize a gathering of clumsy and uninteresting teenagers in the same high school as the previous tragedy. The year is 1987, and only one of them is directly associated with poor Mary Lou’s murder, albeit loosely: young and kindly Craig (Justin Louis), the son of her murderous boyfriend (played as an adult by Michael Ironside, who apparently has never seen a day of prison). That also means Craig’s bewildered girlfriend Vicki (Wendy Lyon) is doomed to become Mary Lou’s unfortunate avatar, and over the course of 90 minutes she is haunted by the woman’s spirit as a precursor to outright possession, all while close friends and former eyewitnesses are murdered or injured by something they cannot see. Had Vicki been interesting enough to warrant our sympathy, however, one wonders what might have been garnered from this concept. But as a monotone projection of horror movie teenage ambivalence she spends her entire venture staring off into dead space, occasionally bantering with religious parents and appearing overly surprised, as if she is awkwardly trying to apply hemorrhoid cream while the camera is rolling.

Shouldn’t that at least pass as roundabout comedy in the minds of seasoned judges in the audience? You would think so, but as ridiculous or miscalculated as the material is becomes, something so obvious goes beyond the urge to laugh at the expense of the endeavor. The first “Prom Night” was a flawed excursion in its own right – made all the more infuriating by how implausibly coincidental so many of the details were – but it had the distinction of furthering its cause with a story that made sense within the confines of the formula. I admired that someone behind the scenes took the material seriously enough to do something passable with it. “Prom Night II,” by comparison, is a cesspit of remnants that never congeal together, other than to emphasize how awkward and transparent the clichés are when modulated by uncertain hands. Every scene, every exchange and delivery lacks finesse, and actors move through the motions of a choppy screenplay with all the charm of underachievers in an after-school special. Didn’t someone behind the scenes have an obligation to warn those involved that they were rapidly descending into a cinematic catastrophe here?

One could at least argue that everyone involved felt comfortable in the material: nearly all of it is shamelessly ripped off from much greater sources. Primary among them is Brian De Palma’s “Carrie,” which supplies the movie with a plethora of cornerstones: the obligatory religious mother, a heroine standing on the outside of social norms, a lone house on a street bordered by a white picket fence, an inevitable prom tragedy and a host of mean girl characters picking at the protagonist’s insecurities. But wait, it doesn’t end there: Vicki also encounters the spirit of her crazy stalker in dream sequences at school (“A Nightmare on Elm Street”), is confronted by piercing synths (“Firestarter”), becomes concerned with a demonic-looking piece of furniture in her bedroom (“Poltergeist”) and meets with a priest who may carry secrets to a solution to her misfortune (“The Exorcist”). Seeing these details assembled for the purpose of an overkill of a climax is amusing in the context of now, but what were they like back then, when horror film audiences were less cognizant of formula? Did viewers accept them in hopes of a payoff, or were they too obvious even then to support the weight of such a dimwitted undertaking?

We ask such questions in order to avoid dealing with the obvious: the film is isn’t just bad and miscalculated; it’s thoroughly dull in the process. Even the one credible performance by Michael Ironside seems awkwardly pushed through the narrative; he doesn’t really have much reason to be there, because the movie cares far too much about propping up the one-dimensional personality of its villain than actually giving her consistent targets to go after. And then there is a moment towards the climax when Vicki, now possessed, gets into an argument with her best friend and attempts to console her in the showers, which falls right into the sexist paradigm of old teenage horror film standards: unless the main characters spend some time trying to outrun something while fully nude in the camera frame, there isn’t much reason for teenage girls to be in the movie.

One of the more fascinating devices in the film is used to bookend the dramatic prologue and the flashy climax: a trunk in the school basement that seems to hold essential knowledge for the victims to exploit (in more reputable films, critics would call this the “Maguffin,” a device made famous by Alfred Hitchcock). What does it hold? Why does the Ironside character look to it as such a pertinent detail in the secrets he holds about poor Mary Lou’s death? Better yet, if one is to tell you that the truth of the contents amounts to nothing of importance, would you be at all surprised? “Hello Mary Lou: Prom Night II” is so dreary that one wonders what a documentary of its making would resemble: a dramatic misfire, or a sensational comedy of filmmaking errors. Here’s hoping none of us ever have to be alive long enough to answer that question.