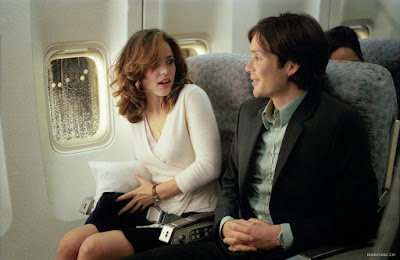 Wes Craven’s “Red Eye” begins with an abundance of strategic visual cues that recall the framework of some of the more sensational Hitchcock endeavors: shots of a stolen wallet, a crate of ice aboard a fisherman’s boat, urgent feet peddling through an airport terminal and news broadcasts about vague threats to homeland security. As isolated devices they seem far too fragmented to be congruent, but those well-versed in the language of movie thrillers know they must add up to something – in this case, a plot that must match urgency with underlying political intrigue. But what horrors are we inclined to contemplate, really, when the most threatening exchange occurs in a hotel lobby between an inexperienced clerk and two disgruntled guests? How are we to assume such menace is around the corner when the two leads, a pair of people who seem to meet incidentally at the terminal, share drinks in the bar and exchange stories that seem more like precursors to romantic interest? The genius of Craven’s long-standing affinity for such premises is that he knew exactly how to throw his audience off the scent of the danger, even though his most loyal viewers knew it must be inevitable. How many astute people consciously thought of ensuing violence, mind you, after Drew Barrymore answered a call from a wrong phone number at the beginning of “Scream?”

As a conductor of macabre symphonies, his was the ability to have terror – usually the supernatural or gory sort – sneak up on characters that were typically just going about their day-to-day business, without any regard to the turbulence of an impending conflict. Sometimes that came out in the form of rather tragic details (“Last House on the Left”), sometimes inexplicable danger (“A Nightmare on Elm Street”) and even bewildering struggles (“The People Under the Stairs”). But his stories were always intensely aware of the necessary human response, even when the circumstances surrounding their fates painted a portrait too bleak to stare back at willfully. Observing these values come to a head in the skin of a relatively simple story arc like the one featured in “Red Eye” does not exactly conjure up the most sensational of expectations, but what his film lacks in promise it more than makes up for in skill, pacing, plausibility, urgency and credible performance. The movie gains an effective footing by, basically, thoroughly exploiting one’s fear of being blackmailed into something dangerous.

The situation: Lisa (Rachel McAdams), a hotel clerk, is returning home from Miami after a death in the family has shaken her perspective. Seen as an asset for her knack for being able to calmly defuse tense situations (observed early on in a phone conversation with an inexperienced fill-in), she opts to catch a flight out of town on the red-eye to be back in time for the arrival of Charles Keefe (Jack Scalia), the head of homeland security, who requires stern security while staying at the hotel. Those are not peripheral details, contrary to the underlying suggestion of the dialogue; in truth they place much more importance on the direction of the later scenes, long after Lisa has made acquaintance with Jackson (Cillian Murphy), a man who winds up sharing a seat next to her on the plane home. Is he a mere stranger who takes a liking to her sweet – if wounded – bravado, or something more menacing? Their early interactions have a quality that removes them from the acknowledgment of conventional foreshadowing, and one finds his charm disarming and infectious when more straightforward actors would easily drop cordial formalities.

Only much later, after their shared interests have been explored and the movie assembles a cast of integral background characters does the reality set in: Jackson is a professional hit man on a mission to have Keefe assassinated, and Lisa is the key component in having his hotel room changed to one where the snipers have a clearer shot. His threats mean little beyond momentary panic, however, until added reveals implicate her father as a possible victim should she not comply with his stern ultimatums. That inevitably inspires some tricky exchanges in which Lisa attempts – perhaps foolishly – to alert others on the plane about the danger of the man in the next seat, and then the struggle evolves into violent confrontations that must be done under the hush of public observation. How else would a movie manage this facet without turning it into yet another formula picture about a plane hijacking? Working from a screenplay by Carl Ellsworth, Craven modulates an unthinkable balancing act of tension without pushing it over the edge, and never does he buckle under the pressure of narrowly-defined possibility. There is an amazing sequence in the second half in which Lisa attempts to communicate through a stranger on the plane that exemplifies his skill; after Jackson knocks her out and she comes to, she glances back at the woman she briefly spoke to and finds her… sleeping in her seat, or perhaps dead from Jackson’s apparent intervention?

The trick of a good thriller is how a perplexing scenario can lead itself into such a tight corner while possessing the fluidity to work out of it before the final climax. “Red Eye” follows the tradition of some of the greats. Like “Rope,” there is one clear road for the characters to follow, and none of them knows what sort of outcome is possible until they allow impulsive behaviors to take over at the pinnacle of their anxiety. Like “Phone Booth,” the drive is brought to intensity over an underlying urgency, propelled entirely by a villain that knows far too much about his victim than he should. Like “Cellular” is has the foresight to frame the danger in a context that depends on time limits and brief windows of escape. And like “Panic Room” there is a sensational third act of cat-and-mouse that challenges the boundaries of its characters, often to heights that are not easily defined.

Yet few among the buffs of notable horror masterminds consider “Red Eye” in the company of his more famous excursions. Is that because a career with such ambitious chapters is destined to see a few of its more precious details swept into the shadows of obscurity? Or does such an example lack impact when stacked against the likes of the “Scream” pictures or “A Nightmare on Elm Street,” which have been celebrated long after their initial impact? The difficulty lies, I believe, in removing oneself from the safety nets. A routine slasher or a film about murder and destruction is an easy sell when you’ve rested on the laurels of the concept for so many decades. More subliminal excursions tend to belong to methodical directors like Fincher and Schumacher. What Craven did was pitch a curve ball into the playing field of his peers that did more than suggest his own versatility: it showed others that he, too, was capable of mastering the Hitchcock doctrine, even after others had forgotten many of its essential lessons.