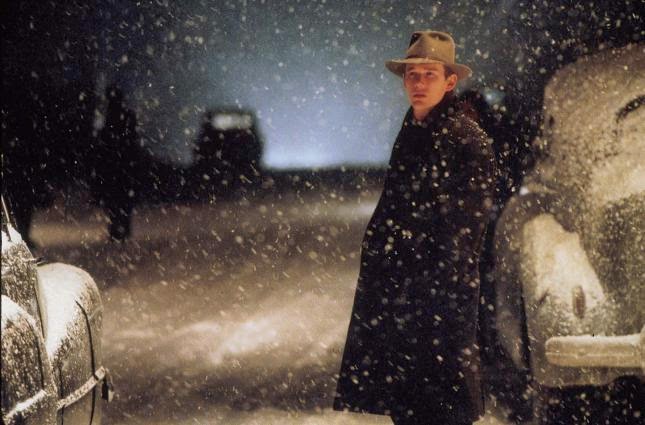 Scott Hicks' visionary "Snow Falling On Cedars" employs one of the most enticing styles of filmmaking that is, unfortunately, rarely seen from our other great movie directors. The approach is a standoff presentation, one that doesn't simply move in a straightforward manner but refers to past memories and flashbacks to garner its credible facts for the audience. The possibilities, both visually and narratively, have almost no limits--the glorious "Dolores Claiborne," for instance, manages to tell two stories both in present day and in the past tense, using only aging makeup and an ominous tone to separate the two. Hicks, who directed the emotionally-drenched "Shine," knows this style like the back of his hand, and presents it here using visual beauty to back up the promising premise. No story done in this manner, however, is always easily absorbed (in all fairness, the importance of present occurrences can get ignored for the past circumstances in these pictures).

The story begins (more accurately, continues) when a Japanese-American is accused of murdering a white fisherman in the Pacific Northwest. During the trial, which features a defense lawyer played by an aged Max Von Sydow, a reporter taking notes from up above keeps his eyes focused on the defendant's wife, an attractive Japanese-American female whom, as we learn through later circumstances, was once involved with him. Through a series of lushly-photographed flashbacks, we see the lovers in compromising passion, so obviously devoted to each other that they look like soul mates. What prevents them from continuing their romance? The pressures of racism, and the pressure of World War II, doomed the entire love affair. It is the script's obligation, understandably, to refer to flashbacks to glitter some reality onto the relationship, because all of this unfolds in the late 1940s/early 1950s, when interracial relationships were considered harsh taboos and had to be seen to be believed.

The man in question is named Ishmael Chambers, and is played by Ethan Hawke; the woman, Hatsu, is played by Youki Kodoh. There are other characters as well, some just as important, others that are underwritten but occupy the screen with enough charm to feel like they have significance in the plot. Especially admirable is the performance from James Cromwell as a judge, who looks stern and has very little dialogue to compensate for his vague facial expressions, but actually cares about the case he is involved in.

In the courtroom itself, evidence is constantly being brought forth both against and in support of he who stands trial. It offers very little insight to the outcome of the defendant; the screenplay, taken from the novel by David Guterson, keeps his innocence a mystery to the audience until the end (like most films about standing a trial). To keep things smooth, in between the slower courtroom moments, the film reaches back into the past to help shape the story between Ishmael and the woman he adores. Eventually, though, the romance angle begins to completely transcend what is happening in the trial. This is really a love story in disguise of a courtroom drama, but that's okay--at least for the first half of the picture.

The thick layering of the story itself has brought concern to fans of the novel who anticipate seeing the movie--they ask themselves the question: will the cinematic adjustment keep the spirit of the story alive, or will it give in to the countless Hollywood clichés that are usually seen in such adaptations? I cannot judge the material on that level, unfortunately, because I've never read the story. What is seen, and therefore absorbed, is effective as is.

So why am I giving the movie low marks? Because Hicks' interpretation gets somewhat dispiriting and impersonal after we grow attached to the flashbacks and bored with the present events--his characters become weakened by the weight of the thick conflicts, and the story gradually descends into aspects of the dull and dreary. The length of the film doesn't help much, either; we get over an hour of good, strong drama and visuals (not all at once, of course), then an equal amount of cold, distanced spirit that depresses more than it allures.

What stands out on its own is the brilliant cinematography from Robert Richardson, which, like the title says, captures tall Cedars at the most glorious period of winter, when snowflakes plummet to the Earth and cover the green with peace and serenity. There is also a sense of tension in the courtroom, as the camera moves around characters like a reporter permitted to interrogate the case's victims.

I like movies with flashbacks; I tend to dislike them, however, when the past overshadows what is actually going on in the present. "Snow Falling On Cedars" does this; the romantic interludes have much more stability than the courtroom drama and tend to distract from its overall significance. This doesn't mean, however, that the present-day events never get off the ground; in fact, for the first half, the story manages to pique our interest for both the past and present. In the end, though, here is a movie that does not quite live up to the potential that so many had foreseen. Kudos to the photography and the characters; hisses to the complex but lackluster story.