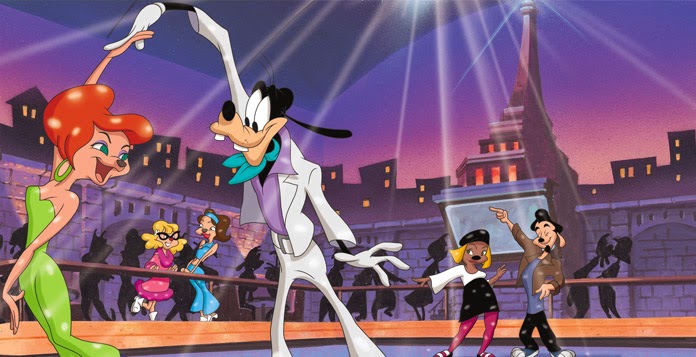 Parents suffer greater pain than one might imagine as they watch their own children grow into adulthood, leading their own lives without the necessity to depend on their creators any longer. The prospect of anyone raising children begins innocently enough; they expect the time between birth and graduation will not go so fast, and therefore not hurt so much when it is time for them to go out on their own. But sooner than they realize, infants crawling around in diapers are going onto school, getting jobs, maintaining responsibilities and then, ultimately, moving away from home. Those who love their children strong enough will feel this way no matter how long childhood years seem to last.

“An Extremely Goofy Movie,” a new direct-to-video sequel, sees Goofy’s son, Max, embarking on one of life’s final destinations towards becoming a man: college (an interesting approach, in a way, since the character was but a few years old and still believing in Santa Claus in “Mickey’s Once Upon A Christmas” from last year). Goofy withdraws from every element that makes up his life when the growing teenager has moved onto the University campus; he gets sidetracked at his job at a local toy assembly line, and busts the machine, resulting in the delivery of his walking papers. Then he is told that he cannot get another job until he acquires a college degree. Good news for him: he will be going to school with his own son.

Unfortunately, this situation is like flies in the buttermilk for Max, who wanted to go to college, in the first place, to get away from his father (not because he didn’t like him; just because he was tired of being treated like a kid). How will both father and son cope with living and working together on the same campus? Simple: they must realize, without doubt, that they are now leading two completely separate lives. They cannot be father and son; they must simply be schoolmates.

The arc is not terribly involved, but it provides an amusing dose of comedic twists either way, sometimes involving one goof or both at the same time. How do you put aside your father/son relationship, for instance, when the dad is forcing his son and classmates to clean up the messes in their dorm rooms? And how do you avoid being a son when your father sits next to you in class and starts abundantly discussing your personal relations? Embarrassment is said to bring the biggest laughs in movies, and Max goes through enough plethora to survive two more “Goofy Movie” sequels.

The plot is more busy than its premise realizes, however; the idea of two family members trying to sweep their relations under the rug would not completely maintain a film at the running time of 76 minutes. Naturally, the goofs are given something to do on the side; Max and his good friends, for instance, are in competition against the infamous Gamma fraternity for the victory of a popular sporting event. The more amusing subplot, however, sees Goofy, a relatively clumsy fellow, fall head-over-hells for the college’s own librarian.

Very few direct-to-video sequels work, but “An Extremely Goofy Movie” is, thankfully, an exception to this rule. This could be, in fact, linked to the notion that the sequel does not have high standards to live up to; the first “Goofy Movie” film, even though amusing, was hardly a “Lion King” or “Beauty And The Beast” at the box office. And its animation, too, was never the quality of Disney’s bigger animated efforts. The direct-to-video sequel is executed with the same conviction as its predecessor, and, therefore, does not represent a decline in quality.

And don’t forget this notion: the film is rather funny, but not in a profound or complex tone. The comedic substance is strictly a surface coating to help spice up the plot, if it should grow dreary or overdone at anytime for the audience. We laugh a lot, but many small Disney cartoons, like the first “Goofy Movie,” are not made to simply provide the viewer with intense laughter. There are more solid issues at heart: father/son relationships, coming to terms with growing older, putting hard effort into your grades even if it means interfering with less-important engagements, and learning to respect each other’s privacy.

When it comes to cartoons, “An Extremely Goofy Movie” argues that sometimes, indeed, less is more.