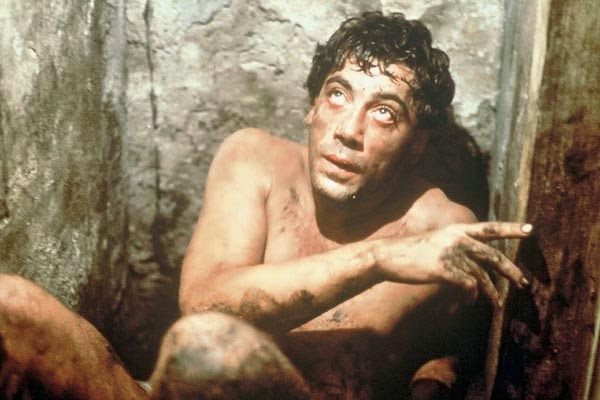 Artists are probably some of the most courageous and strong-willed individuals in existence because most of their inspiration is derived from the intense suffering that usually envelops their own lives. Since they understand and identify with the content that goes in their products, they have little trouble in finding a loyal audience. And though their motivation can at times lead to bizarre and ambiguous endeavors, they have to be applauded, if only for the fact that every ounce of pain that has been inflicted on them inspires them to create rather than to destroy.

In "Before Night Falls," a biopic about Cuban writer Reinaldo Arenas, that kind of story is echoed. It tells of a young boy raised in a household of poverty, whose interests in writing were instantly spurred by his lifestyle conditions, leading him to seek out those ambitions once he had grown up and moved into the city. Cuba, of course, was a fascist dictatorship by the mid 1960s (the time in which Arenas begins pursuing his desire), and any person with different ideas or lifestyles was instantly thought of as a threat to the government. Fidel Castro directly targeted artists and homosexuals as the immediate flies in his revolution, and since the young Cuban was both, the path towards his dreams was hardly paved in gold.

In ways, the rest of his life was not subject to much improvement. He wrote nine or ten books during his lifetime, but most of them were published overseas because of censorship issues in Cuba (to do this, Arenas had to smuggle them out of the country). Later, he was wrongfully accused of molesting minors and then sent to jail, where he spent years as the subject of much abuse because of his controversial publications. And just as he was spit out of the justice system, he was exiled from his own country, condemned to live the remainder of his life elsewhere. He died at his residence in New York City in 1990 after a long battle with AIDS. Shortly after, his autobiography, sharing the title with this movie, was published.

This is all interesting on paper, but "Before Night Falls" is not exactly the most enthralling descent into these events. The movie is beautifully rendered, with photography that is gritty and distinctive, and acting so solid that it practically jumps off of the screen. But the story itself is all over the map, so unfocused and distant that it isn't even sure how to make the viewers feel. There is a scene near the halfway point that acts as "Exhibit A" under this issue, in which Reinaldo is badgered by a Cuban guard played by Johnny Depp (he has two roles in the movie, the other being a prisoner who dresses as a woman and has an ulterior talent for smuggling), who taunts the writer with the possibility of freedom from prison, but only if he agrees to certain compromises. Reinaldo has a daydream during this scene in which the prison guard is aroused and then pulls the writer's head towards his waste. The scene is so mysteriously conveyed that we don't know whether to laugh or be shocked.

The film's biggest asset is the lead performance from Javier Bardem, who is as confident about his portrayal as few actors would be. He approaches the Arenas role as if he's memorized the persona, expressing a cluster of distinctive emotions at all the right moments without ever seeming too involved or obligated. Even when the script is unsure about the character's direction, Bardem is flawless in his conviction. It would be a big mistake not to consider him among the year's top Best Actor Oscar contenders.

But to what extent can the movie be forgiven for narrative flaws? I dunno. There are more here than previously mentioned. There is, for instance, an issue of consistency with the narrative; while the majority of the picture is spoken in English, there are unexpected (and pointless) excursions when the characters abruptly shift gears and start speaking Spanish, then return back to the former before we can get use to the change. There is no sense of rhythm or pace in any of this. And furthermore, how are we supposed to know exactly how good a writer Reinaldo was when we never get to see (or hear) any of his work on screen?

"Before Night Falls" does not work here as a movie. Even though Bardem is highly engaging as the lead character, and the images that surround him are among some of the most evocative I've seen, the treatment has no stability. A trip to the bookstore to pick up Arenas' memoirs might be a better decision than seeking out this miscalculated character drama. With any luck, the book itself would at least offer some insight into what made Arenas so controversial and recognized as an author.