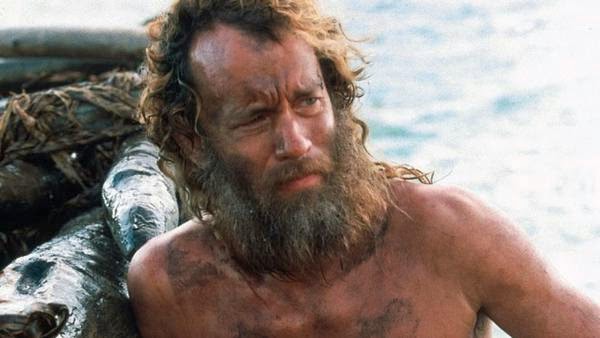 "Cast Away" is a movie divided by its own warped conviction, an odd and unbalanced undertaking that pays distinctive attention to the appropriate elements but then draws back at all the wrong moments, ultimately leaving us unsatisfied and, in ways, feeling ripped off. Presented in three phases, the story clearly operates under opposing values, because while the first act is exhilarating and the middle mildly intriguing, the finale is a complete miscalculation, so wretchedly played that it does little but drag down everything that precedes it.

And yet it survives the competitive winter box office contest, persistently drawing in hordes of money each new weekend, leaving many of its competitors (some of them even better movies) in the dust. Some even say the picture may sweep under this year’s Oscar carpet and pull out with a few nominations. Are those predictions accurate? Quite possibly. But the majority of them are nonetheless undeserved. This is one of those movies where the hype is greater than the actual payoff.

Tom Hanks plays the role of Chuck Noland, an executive officer for FedEx packaging who is stationed over in Russia during the holidays. Eager to return home to his girlfriend Kelly (Helen Hunt), he shouts at and badgers his workers as they prepare, rather slowly, a large delivery of packages that has to be compacted in a truck within just a couple of short hours. We get the direct impression that Chuck is a man who operates very well and efficiently under pressure, and the vibrancy in Hanks' performance here is further proof that this is undoubtedly one of the strongest and most gifted screen actors around.

A drastic change in priorities arrives when Chuck, having already returned home for Christmas and dinner with his closest friends and relatives, is called away on an emergency delivery overseas. He hops onto a plane with three pilots, looking back on Kelly without worry, and then takes to the air. Unfortunately, a big storm moves into the plane's path far into the journey (the movie clearly indicates that its location at the time is far over the Pacific Ocean), and in a mind-numbing sequence of sheer tension, this doomed aircraft experiences turbulence, loses control and crashes directly into the ocean. All three pilots perish on impact, but Chuck manages to escape and reach the surface before the water swallows him. When he wakes from a night of tossing and turning throughout the seas, he finds himself marooned on a small deserted island, where he is forced to use the very limited resources there in order to survive until someone finds and rescues him.

This is all where it starts to slowly unravel. The conviction of most of Chuck's activities on this isolated patch of land are bravely realized, to the picture's credit, particularly when we observe him building fire by rubbing two sticks, using his raft as a tent from damp weather, and utilizing the assets of several FedEx packages that wash ashore (most notably, a volley ball that he makes a face on, converses with and calls "Wilson"). However, the order that these events are presented in is questionable: to what justification, for instance, would the movie end a scene in which Hanks' character passes out after successfully doing his own dental work and then immediately cut to new activities taking place four years later? The pace has an extremely curious approach, one that doesn't hesitate to cut us off from interesting occurrences and then dwell endlessly on routine ones.

The conclusion is a separate issue entirely, one which I have great temptation in spoiling (although if you've seen the preview trailers, you obviously know how it all ends anyway). In just under a half hour, every shred of merit and interest is discarded for a series of severe narrative blunders, the biggest of them being an important plot point that ultimately contradicts the overall objective of the picture itself. And as the story loses its sense of direction, so does the tone, drifting from credible to manipulative faster than we could have ever anticipated.

Director Robert Zemeckis, who made one of last decade's best films ("Forrest Gump"), at least retains a decent sense of style among all of this, with cinematography that loops around the protagonist like birds on prey, and editing that mounts the majority of early tension. Kudos to Tom Hanks as well, whose performance is more well-established than any of his previous acting jobs of the last few years. But to what point is all of this merit without a solid, stable screenplay backing everything up? "Cast Away"s heart is in the right place, but its brain is in a dark, damp chasm covered in seaweed.