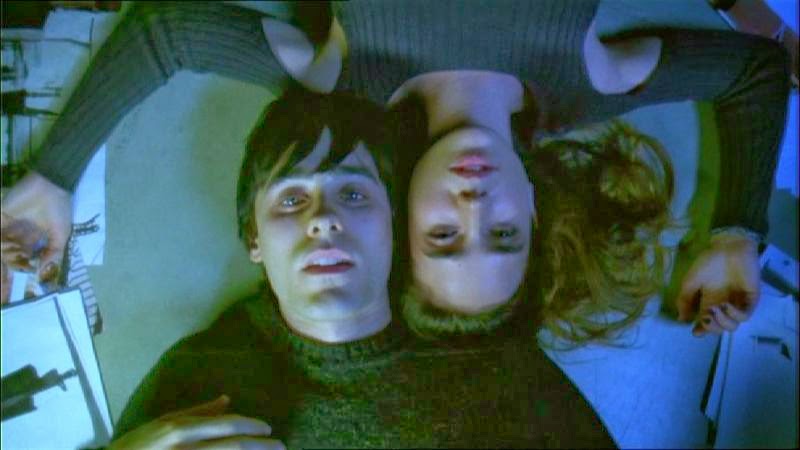 It can be said that an addiction to drugs is like hiking in circles, because no matter where that person begins, the path that follows leads nowhere but directly back to the one position where it all first began. Sooner or later, addicts will have to reconfront the exact issues that initially spurred those addictions: money problems, curiosity, escapism from a crumbling life, and so on. Seldom is something meaningful ever gained in the process, needless to say; although there are moments when the drugs seemingly suspend all rules and set them free, the aftermath deals out a heavy share of damage, both psychological and physical. The extent of the damage all depends on the length of time such a dependency lasts.

"Requiem For A Dream," which features four people who hop on this kind of downward spiral, is as detailed and striking as a film about these kinds of problems could ever hope to be—perhaps even a little too detailed, at times. But it's a movie, in any case, that proves its point squarely: drug addiction is an unsightly, menacing and bleak prison for its victims that can lead them to either a clean future or a death sentence, depending on which of the victims find the strength to change their ways. And to prove that point, the movie wraps itself in a blanket of vivid, swift and intense imagery, shot mostly in close-ups as our four addicts inject or digest the drugs without care or reasoning, simply for the sake of withdrawing from their lives and experiencing some brief sensations. That doesn't necessarily make it the greatest picture of its kind, but it certainly does make it one of the most blunt, honest and fierce ever made. Calling the foreground a complete frontal attack, in fact, is understating the issue.

The star is Ellen Burstyn, one of Hollywood's greatest living actresses, who portrays an elder, widowed housewife named Sara Goldfarb, a woman who loves television almost as much as she does her own son Harry (Jared Leto). In the opening scene, we see him mercilessly pawn off his mother's television set for money to support his drug habit: an act that is suggested to be a routine thing, judging by the way the characters handle the situation. And yet each time it happens, Sara simply goes down to the local pawn shop, repurchases the TV and wheels it back home, unfazed by his actions. Even when the pawn shop owner implies that her son's consistent routine is an act of thievery, she doesn't seem worried.

One day, Sara receives a call from the offices that handle contestant entries for her favorite television show, announcing her as a winner who will appear on the show as soon as she sends in the next entry form she receives in the mail. In anticipation of the event, Sara goes on a diet so that she can fit into her favorite red dress. Unhappy with the apparent results (and the fact that she can't eat her favorite foods), she takes the advice of a neighbor to see a specialist regarding new diet pills, eventually being given a prescription that cuts off more than 25 pounds in a few short weeks. But as she adjusts to taking the pills, the eventual side effects surface, and with little forethought as to the risks of ingesting them, she increases her dosage, leading to an addiction that leaves her broken and incoherent, and then later steers her to utter catastrophe.

The director is Darren Aronofsky, a talented visionary whose remarkable emphasis on the ferocious intensity of visuals also gave us "Pi," a 1998 film in which a man believed that numbers contained clues to the existence of a god. Here, he intertwines Sara's story along with three others so consciously that, even without many narrative specifics, our attention is never lost along the way. His actors, likewise, move through the material with a colorful but graphic depiction. Jennifer Connelly and Marlon Wayans are particularly successful as two addicts that have close ties to Harry's dealing, and Leto does well as a man who loves others but lets the obsession with drugs cloud his judgment. It is Burstyn who is the immediate winner here, though; using fine touches of deep emotion, naivety and confusion in her performance as Sara, she more than qualifies for an Oscar nod.

If there's one problem with the movie, it lies within the abrupt climax, which brings everything to a screeching halt. It is a given that all four of our players will eventually be forced into a dark corner, but their fates are unreasonably stacked together here, rolling off the screen so fast that there is little time to catch our breath. Seeing that the movie is only 100 minutes long, there is no reason for this; surely an extra ten or even fifteen minutes could have been supplied to space apart the final occurrences.

Although the ending's speed is questionable, the conclusions themselves are by no means miswritten, which only strengthens the anchor here. "Requiem For A Dream" is a brilliant achievement for both the filmmakers and the actors, and might very well serve in the near future as prime evidence of why no one should surrender themselves to the addiction of such dangerous substances.