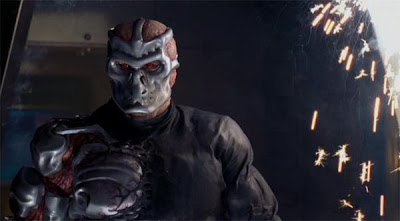 "Evil Gets an Upgrade."
- Tagline for "Jason X"

We should have known that it would come to this. For nearly a full decade (and what seems like too short a time), one of Hollywood's most notorious killing machine creations, Jason Voorhees, has rested somewhere deep in the bowels of cinematic hell, retiring from slicing teenage throats and ripping guts open after nine installments into his never-ending "Friday the 13th" franchise (a promise, in fact, was made in the last picture's title, indicating that it was, indeed, the "Final Friday"). Now, just two short years into the new millennium, Mr. Hockey mask has returned to the fray, familiarizing himself with those old methods of mayhem in the new film "Jason X." Is this a surprise? Oh, not at all. The only real shocker, actually, is that mankind seems to be just as stupid and naive 400 years into the future as they were at Jason's old hunting grounds.

That, of course, is the least of our worries. As ads for the new film come scrawling onto television screens, we're given the impression that the series have not only been revived, but perhaps revamped into something a little more tongue-in-cheek as well. The trailers are admirable; sharp dialogue is spurted out here and there, providing a natural combat to the clichés enforced by the old teen slasher flicks. There's a lot more in the movie itself, too, suggesting that there was some kind of silly potential with resurrecting Jason again. But alas, when you peel away the small intricacies that in ways make "Jason X" stand out from its predecessors (the sci-fi setting, the parley, etc.), what is left underneath is little more than the original "Friday the 13th" rehashed once again, the only difference this time being that the visuals have undergone a significantly observant facelift.

The story of "Jason X" (surely not the appropriate word) begins somewhere in the early 21st century, where a research facility set up at the grounds of the old Camp Crystal Lake has Jason completely chained up, being prepped for entering a long-overdue cryogenic state (although the conclusion of the last film is never explained here, as that would defeat the purpose of this film even existing). A series of doctors propose that Jason be relocated for observation (big surprise: he apparently is able to regenerate destroyed tissue), but the beautiful Rowan (Lexa Doig), who is assigned to study the Vorhees case, fears taking that kind of risk. And who wouldn't? This is a creature, after all, that can apparently escape being chained up in less than two minutes off screen, slaughter his guard, and then chain the body up in his place before the doctors return to the room.

It doesn't take long for the antagonist to dispose of all the characters, but Rowan manages to trick Vorhees into the cryogenics freezer before she becomes his next slice of meat. Unfortunately, she makes the grave mistake of standing too close to the cargo, and when Jason's notorious machete pierces the metal (who knew that he was superhuman?), the plant undergoes lock-down and she is trapped in the room with him.

Flash forward to the year 2455, where Earth has literally died above ground, and only a few humans remain, primarily to scope the land in hopes of finding something still alive beneath the surface. They find Rowan and Jason together in the frozen room underneath the laboratory, and foolishly, decide to take them on board to their space ship, where the crew hopes they can revive their latest discoveries. From that point on, you know the drill.

The ideas that "Jason X" conveys are almost too familiar to even deserve a writing credit, and not all of them, incidentally, are inspired by the "Friday the 13th" films themselves. Sure, there's your fair share of blaring sexual tension and dangerous dark corridors present for Jason to wander around in, but the movie also rips its influence from sci-fi pictures like "Star Trek," "Aliens," and even "The Terminator." The movie even lures us into a brief realm of promise when it allows some of its survivors to be intelligent enough to distract Jason by programming the ship's computers to create a hologram in the vision of the original Crystal Lake. The computer nerd of the movie even throws in a couple of sex-driven teens into the mix, which have become Mr. Voorhees' favorite type of victim. But the distraction, although executed effectively (and rather hilariously) lasts about as long as our initial patience with the story, and quickly the idea is abandoned, returning us to a reality in which the characters are dumb, and their inevitable deaths even dumber.

The violence level of the movie, however, is surprisingly tame; though there's a fair share of creative (but bloody) methods Jason utilizes in slicing his prey, it never quite reaches the gratuitous nature of any of the previous films in the series. That aspect itself may very well underscore the whole point of violence in slasher movies anyway; apparently heads rolling off their bodies aren't quite what they used to be.