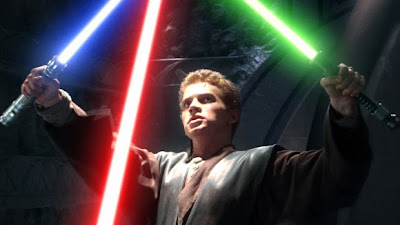 A narrative nightmare with an ensemble cast that screams "filler" in modern moviemaking lingo, "Attack of the Clones" is endless, joyless, clueless and senseless, a film that is patched together without any seams or coherence. The movie doesn't even have a central direction; it wanders from one point to the next in literal confusion, trying to manipulate the audience into believing it recognizes the path that needs to be taken. Everyone knows the inevitable destination Lucas has in mind with his trilogy of prequels here: the only question is, why does he even bother planting the seeds if he refuses to let them sprout?

The movie picks up ten years after "The Phantom Menace," which, believe it or not, is not nearly as bad a film as most would have you believe. During a time when there is major unrest in the galactic federation (planets and establishments are severing ties with their government at an alarming rate), an assassination plot surfaces against Senator Padmé Amidala (Natalie Portman), who was once the queen of Naboo and now contributes her political knowledge to a senate clouded in uncertainty.

Enlisting help from the Jedi council in attempt to prevent the plot from being carried out, Amidala reconnects with Anakin Skywalker, the little boy from Tatooine she knew all those years ago. Anakin (Hayden Christensen) now aged and matured, is serving as a Jedi apprentice under the supervision of Obi-Wan Kenobi (Ewan McGregor), and fancies himself the greatest Jedi the federation has ever seen. But his naivety and egotistic attitude threaten to get in the way of the core problems at hand, which begin to reveal themselves as Obi-Wan unravels the conspiracy and discovers an army of clones being built on an unmapped planet in a nearby galaxy.

The above plot description above will not likely be the most thorough at your disposal, but it's the best I can provide. As I watched "Attack of the Clones" unfold, reminiscing about the complex events of the first four films, it dawned on me just how increasingly difficult it is becoming to explain the setups, the gimmicks and the points Lucas utilizes in trying to tell us this story. Much of the confusion is provoked by his awkward characterizations; certain players appear as deadweight when they actually carry significance, while others who seem important really don't have much of a thrust in the narrative. Consider the presence of Christopher Lee's Count Dooku, who is the movie's main antagonist; we sense there is a purpose to his mad ramblings about why it is crucial for him to detach himself from the federation, but in the end, the only thing that truly separates him from any other force of rebellion is the fact that he goes one-on-one with Yoda in a lightsaber battle. Furthermore, the character doesn't even feel like it belongs in Lucas' universe; his motives, ideals and methods are almost directly ripped from J.R.R. Tolkien's Middle-Earth, where the wizard Saruman turned on his order and commanded a powerful army of Orcs for the opposition (incidentally, Lee also played that particular character in Peter Jackson's film adaptation "The Fellowship of the Ring").

Furthermore, the movie's lead characters, Padmé and Anakin, greatly suffer from the old Hollywood romance syndrome, which clearly indicates that any and all intelligent character traits are abandoned in favor of clichéd dialogue exchanges and chemistry-driven interludes, where the two love-struck players reveal their feelings but insist on holding back because of their duties to others. This is perhaps the movie's saddest pitfall, as both Christensen and Portman are extremely talented actors who are more than capable of pulling strong material off. Watching them mope around in Lucas' dreary story is like observing the love story in James Cameron's "Titanic" at half speed minus the climactic disaster.

I could spend time some talking about the special effects of "Attack of the Clones," but perhaps that would be pointless; you already know how elaborate Lucas' eye is when it comes to science fiction. Despite his narrative troubles, the director at least manages to paint a portrait worthy of notice, using tall cityscapes and fast air vehicles to stretch the dimensional feel of this seemingly transparent universe. And yet not all of the visuals have the necessary realism; in fact, when some don't just appear blotchy and fuzzy (a result of showing digital film on standard theater projectors), they're actually kind of childish and unconvincing. Consider the new approach that is taken with Yoda, the franchise's greatest character asset; in the original films (and even "The Phantom Menace"), the wise, long-eared center of the Jedi council was a work of animatronics, matched with the vocal brilliance of Frank Oz. This time around, the poor being is completely (and very obviously) rendered by computers, stripping an essential ingredient from his appearance until we hardly recognize him. The big plus is that the digital angle allows Yoda to do something he was never capable of doing in the previous movies: fight a one-on-one battle against his nemesis with a lightsaber. The look of this scene, of course, is questionable, but we sure do enjoy watching the old guy hurdle through the air as he attempts to dodge the weapon coming at him.

I've never exactly been a fan of the "Star Wars" films; in all honestly, I could very well live a satisfying existence without ever having to hear them mentioned again. But whenever one of these new films is unleashed onto theater screens, some small glimmer of hope is always restored in me, as if maybe, just maybe, Lucas will finally come across with an endeavor worthy of notice. But no such luck with this latest incarnation. There is an ironic moment during the movie when Obi-Wan is grilled about not knowing the difference between knowledge and wisdom; maybe it's time Lucas listened to similar criticisms.