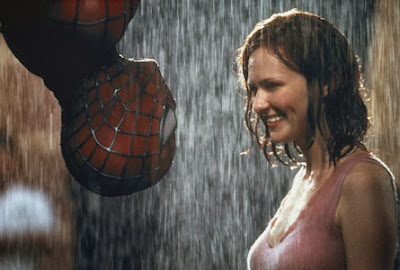 Now about that issue I have with Spider-Man himself: turns out it's all in his mask. During the course of the movie (and the comics themselves, for that matter), Peter Parker is able to convey his speech clearly and meticulously through a spider mask without any kind of outlet near his mouth. Sometimes it almost feels as if he's simply speaking mentally to others. Of course, common knowledge explains how this is all possible (the mask is certainly not soundproof), but the result looks too awkward and unconvincing to really come across. The comic books never resolved that issue, and Raimi doesn't see the need to do so, either.

But never mind about minor glitches; "Spider-Man" is a solid and amusing package of bright visuals and energetic storytelling, torn from the pages of the 30-year-old comic book so neatly that you can almost taste the cartoonish flavor. Behind every story of a super-hero, however, lies a routine account of events leading up to twists, and this movie is no exception. Tobey Maguire assumes the role of Peter Parker, a naive but smart young lad who bases practically every action around his obsession with the fetching young Mary Jane (Kirsten Dunst), a girl with a bad home life whom he has a crush on. His shy but sincere persona, however, is also ammunition for his immature peers at school, who don't hesitate in poking fun at his outcast-like presence whenever they have the chance.

During a science field trip to study genetically altered arachnids, however, Peter is bitten by an fugitive spider. There's instant alarm, but nothing significant seems out of the ordinary... until his physical appearance begins to beef up, and his senses go from solid to superhuman. Evolving even has he is able to mutter syllables, the confused Parker boy makes further realization of his capabilities. He can climb walls. He can spin webs. He can even leap from one building to the next almost as if there's no gravity holding him down. Of course, experience is need to master such skills, and that's the movie's main thrust: for him to come to terms with something out of the ordinary in true coming-of-age fashion (and strangely enough, part of the appeal of Peter Parker right from the beginning has been that he always seems more human than most of his super-hero counterparts, as if he's that optimistic kid we all know who promises to never change no matter how successful he turns out to be in life).

The initiative that our young hero is given comes in the form of Norman Osborn (Willem Dafoe), a powerful businessman who volunteers, quite ignorantly, to be the guinea pig of a performance enhancer his company has been working on. The result, needless to say, isn't exactly successful; in fact, it actually turns Osborn, incidentally the father of Peter's best friend, into a stark-raving lunatic who assumes the alter ego of Green Goblin, a menacing figure who terrorizes the good-natured public of New York without mercy. Parker's transformation and his eventual dedication to protect innocent people (which stems from the abrupt and tragic death of his uncle) instantly makes him the Goblin's biggest obstacle.

Dafoe has seldom been recognized for his strong screen talents in the past (only recently with "Shadow of the Vampire" did that change), and in "Spider-Man" his presence is wickedly appealing, complex and genius, almost far beyond the reaches of the original comic book stories his character appeared in. Maguire, meanwhile, is a surprisingly appropriate cast as the main focus of the movie; his filtered energy and boyish charm are ideal traits for a person like this to carry, and his presence is even more charismatic than it has been in the past ("The Cider House Rules," anyone?). Of the major players of the film, only Dunst's performance as Mary Jane is the letdown; she comes off as too distant and unfocused to truly feel like a damsel in distress, and though there are times when she and Maguire's chemistry can be very engaging, it's all far in between.

The movie's visual approach could easily service a review by itself, but that's not a necessity; in the grand scheme of things, Raimi's crew of artists have replicated the world of the Marvel comic so meticulously, it's possible that die-hard fans of the series could identify what scenes were inspired from what frames in the books. Don't assume, however, that what you're seeing is supposed to look genuine; the images are styled with a flair that is as flashy as it is obvious. But the concept's silliness doesn't undermine the illusion at all, if you know what I mean; the perception of Spider-Man in any reality has always been cartoonish, and this movie maintains that feel because it works.

This may not be the kind of movie that will reinvigorate a formulaic genre (heck, the formula still works), but it does follow nicely in the footsteps of "X-Men," the last major film to be adapted from a Marvel Comic. That picture, of course, is greater in scope and conviction, but it also required more foreknowledge than perhaps moviegoers were willing to take in with them. Given that scenario, "Spider-Man" embodies the true and unmatched spirit of its source-material: light-weight but engrossing entertainment that never tries to overstate its position or authenticity.