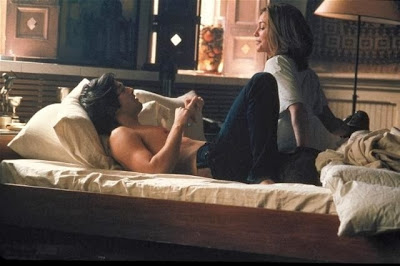 If any of these themes sound remotely familiar, chances are you are familiar with "Fatal Attraction," a 1988 Oscar-nominated film about a married man who strikes up an affair with one of the most berserk women in modern thrillers (coincidentally, the movie was just made available on DVD). You may also notice that the director for that particular film is, in fact, the same Adrian Lyne who is behind the camera of this one, reacquainting himself with the familiar themes of love, lust, betrayal and infidelity as they come crashing down in a picture-perfect setting. But whereas the older movie, despite its relentless shortcomings, had something mildly interesting happening during its two-hour running time, "Unfaithful" is a dead zone of storytelling, character arcs, visual gimmicks, tension and payoff. It's also one of the most cold and insensitive movies of recent memory, a joyless pity ride that sandwiches the viewer between so many unrewarding concepts that they've long been suffocated before the resolution even plays out.

In the story, Connie is the wife of a successful businessman played by Richard Gere, a calm and devoted husband who cares about what goes on in the lives of those around him. Together they have a charming young son with puppy dog eyes, and yet little else links them emotionally to committing to a stable family environment. Gere's Edward is constantly at the office, their son is busy at school with rehearsing a play, and Connie is, despite having a job of her own, rather bored. Her chance meeting with the book dealer Paul is merely one of many that fuels her passionate needs, and soon both of them are meeting during the day down in Soho, engaging in hot and heavy intercourse apparently so satisfying that the two even have it at a Cafe restroom across the street at one point. But no matter how much happiness Connie finds in the sack with her new beau, the bigger issue takes center stage: should she risk everything for an affair that might not have anything else attached to it, or should she try to work things out with the man she still loves more than anything? And if she decides to stay married, can she survive the wrath of a husband who may be getting closer to the truth than she realizes?

The script by Alvin Sargent and William Broyles Jr. is an impossible mess, defying the laws of narrative structure for no apparent reason other than to be able to distinguish itself from other movies about adultery. Not only does the picture repeat the same scenarios on a regular basis (how many times do we need to see Connie rendezvous with her European hunk before any progress is made?), its idea of a conclusion is both anticlimactic and detached, as if it were pulled out of a pile of scraps during shooting because someone else lost the pages for the real ending. The performances, meanwhile, are severely compromised by the choke-hold writing; Gere's role as a husband teetering on the verge of doing something he regrets is totally transparent, and poor Diane Lane is subject to countless scenes involving her sneaking around, dodging questions, crying on shoulders and feeling conflicted.

Even sadder is the fact that the audience is teased with something that could have been spectacular in the right kind of movie: Olivier Martinez, who plays Paul. It's apparent that he is capable of a dark, sinister performance (subtle clues proving this point are established towards the movie's early climax), but here he is merely a pawn in a narrative that doesn't have much desire. Even when we least suspect the story to alter his seemingly charming persona, we sense something powerful brewing in him, as if he's a new face at an acting audition crying out for someone to give him a chance to prove himself.

The movie does, at least, have a few merits. Lyne's direction, as it has always been (even with his bad movies), has an interesting and observant flair, especially when he utilizes ordinary objects to propel the moods of his characters (the standard kitchen knife, used also in "Fatal Attraction," seems to be one of his favorite). Something could also be said for the movie's supporting roles (notably Connie's friends Gloria and Lindsay), who exist exactly as they are supposed to without taking overwhelming importance, as they tend to do in most movies. Heck, there is even a great scene in the later half of the film, done almost entirely without dialogue, where both husband and wife react to a crucial object and realize that they know each other's secrets. But don't fall for these traits and let them blind you from the more obvious truths at hand. Watching "Unfaithful" feels like having sandpaper rubbed in your face.

Drama (US); Rated R for sexuality, nudity and a scene of violence; Running Time - 121 Minutes