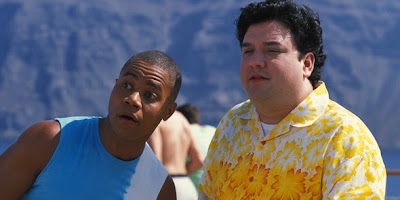 So here it is already, just three short months into the year—the single worst movie of 2003. "Boat Trip" hurls itself onto the screen like an endless diatribe of amateurism, slashing its way through one bad scene after another before it ultimately sinks into the murky depths of nothingness. The movie is an insulting, pathetic and tone-deaf assault on our senses; to watch it unfold from beginning to end is to feel imprisoned by the screening room it is playing in.

Here is an achievement that doesn't merely come off as just plain dumb comedy, either, but one that insults the very basic meaning of the word. It would be bad enough for any movie to lack the sense of humor necessary to classify itself as a "comedy," but "Boat Trip" is so utterly void of general intelligence that it even lacks the function to realize its own idiocy. Sight gags and one-liners are thrown off the celluloid without the smallest morsel of concern or forethought, as if the idiots in charge of the production genuinely felt that they were actually giving the audience a quality product.

The film stars Cuba Gooding, Jr., in a performance that makes his cringe-worthy turn as a dentist-turned-dog-sled-conductor in "Snow Dogs" seem almost Oscar-caliber in comparison. He plays Jerry, a guy who dances to James Brown, makes faces at his butch dog, and stares at the photo of his girlfriend Felicia (Vivica A. Fox) on his computer desktop every chance he gets. During the first minute or two of the movie, he sets off in a hot-air balloon with his darling gal to pop her the big question, only to be immediately turned down when she confesses that she has the hots for a new man in her life (although the fact that Jerry tosses his cookies all over her dress, I'm sure, helped sway her initial decision).

Six months later, the movie so conveniently tells us, Jerry is still staring at the photo on his computer of the woman who got away. Out of the blue, his best friend Nick (Horatio Sanz) calls and asks him to a local party, where they're both offered advice about kicking their dead libidos back into gear via a singles cruise. As horny as both men are, they jump at the opportunity without even giving it a second thought, but a mistake at the local travel agency gets them booked on a singles cruise of completely gay men, and neither Nick nor Jerry know about it until the ship is in the middle of the ocean (never mind the fact that a banner advertising it as such hung from the side of the ship right before they got on, though).

And then the movie lurches us into 80 minutes of excruciating, puckered and dissonant gay jokes that have all the comic value of brain tumors, in which Jerry tries to win the unsuspecting heart of the knockout dance instructor Gabriela (Roselyn Sanchez), and Nick tries his hardest to avoid his hormone-driven male environment, especially when a team of female Swedish swimmers is picked up from the sea after their helicopter is shot down. There are also repeating gags here, such as one involving Roger Moore flirting with Nick like a hawk hovering over its latest meal, and another in which Jerry tries, rather forcefully, to pass off as a gay man in order to keep the watchful Gabriella off the scent of his looming attraction. Where this is all supposed to end up, I'm not entirely sure—the resolution of the film lasts about ten measly seconds before imploring a long and useless epilogue afterwards, and though any ending by that point can be considered good news, the idea that a movie gets away with stealing 90 minutes of our precious lives without even having a complete resolution is like rubbing salt in the wound.

The script for "Boat Trip" credits two writers, one of whom is also the director, both of whom probably didn't graduate from film school. As their first venture into the world of commercial moviemaking, their effort here is almost too bad to even deserve a lashing with words containing multiple syllables. But the real tragedy here lies not with their misguided work, but with Cuba Gooding, Jr. himself, a man who won an Academy Award for his wonderful performance in "Jerry Maguire" and then quickly disappeared into a foray of forgettable and jaw-droppingly repulsive screen flops. This latest travesty represents only the lamest of the lame, and if the picture is a sign of things to come, it only forecasts an outlook too bleak to even think about. This is the kind of movie where you'd wish someone on the set would start looking for an iceberg to plow into just five minutes into the sea excursion.