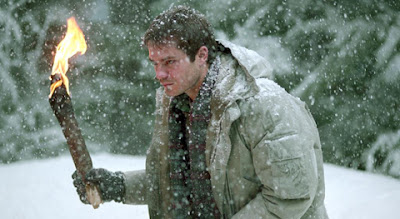 Promotional trailers tend to build great expectations without even revealing the smallest narrative clue, and that is the situation—or more appropriately, the downfall—with Lawrence Kasdan's "Dreamcatcher." In the recent weeks, television screens and theater projectors have been bombarded by swiftly edited teasers that are almost too incoherent to grasp the basic context. They are deliberately ambiguous, converged on rapid camera shots and pulsating thuds in the soundtrack as they shamelessly maneuver every plot angle they can. Normally this approach can suggest shortcomings, but we as moviegoers are too optimistic to live by such ideals, so when people enter the movie theater to finally see the final product, they will be going in not with worry or reservation, but with genuine excitement. Only in the end, however, will they realize exactly why all the advertising spots lack an outline of the premise.

"Dreamcatcher" plays like seven or eight movies at once—some of them promising, some of them disorienting, some of them pointless, all of them without an anchor or payoff. It is based on a Stephen King novel of the same name, which I am currently unfamiliar with, but is still no doubt marked with concern since almost none of the author's horror stories have made decent screen transitions in the last 20 odd years. Nonetheless, this particular approach has still yielded quality results in the past—"Carrie" and "The Shining," notably—and towards the opening of this latest excursion, our hope is high, as there are some solid patches that seem to tip the scales in favor of a positive outcome. And then something terrible goes wrong: the movie completely abandons its focus, dividing itself into five or six different subplots that have no center, no distinction, and no relevance to the initial thrust whatsoever. The fact that there's an ending at all amongst these heaps of ideas is a surprise in itself.

The first half hour, at least, remains untainted by the lunacy. At the opening of "Dreamcatcher," we're whisked off into the personal and professional lives of four lifelong friends: psychiatrist Henry Devlin (Thomas Jane), a college professor Gary Jones (Damian Lewis), automobile salesman Pete Moore (Timothy Olyphant) and Joe Clarendon (Jason Lee), occupation undisclosed. They share things like members of a close-knit family, not the least of which is a telepathic bond bestowed upon them by a retarded boy whom they saved from harassment years before. Now heavily into careers and lives independent from one another, this psychic adhesion of theirs seems almost subdued and unimportant in the way it is casually utilized, until Joe calls Gary one afternoon to ask him to "be careful," and the professor is nearly killed when he steps blindly into oncoming traffic later in the evening.

Months have since passed. The four venture into the snowcapped mountains for a weekend at a cabin in the woods, a pastime, we gather, is tradition for these men, who always seem to enjoy each other's company without outside interference. They talk about movies, share personal memories, question fate and circumstance. Then they go hunting, not, of course, expecting to come across anyone or anything that might disrupt their established pattern. But when Jones discovers a disoriented man lost in the wilderness, he invites him in for recuperation, only to regret the decision later when it turns out the man is harvesting something very deadly inside of him.

This, the Stephen King legacy has always taught us, is the plot device that turns seemingly normal situations into bloodcurdling tales of macabre. With "Dreamcatcher," however, the contraption splinters like a decayed branch until there is no longer a clear direction. The script is a narrative septic tank, underpinned by promising psychological ideas that get lost when the movie involves them in confrontations with sharp-toothed creatures, alien invasions, possession, military conspiracies and deadly viral outbreaks. The result isn't just confusing, but frustrating as well, especially when supporting characters, like a violently determined army colonel played by Morgan Freeman, appear briefly to bend the plot off into other directions and then quickly disappear before there is a chance to establish them.

...And then there are the aliens, bloodthirsty little beings that look like mutated leeches, who are not only able to deface someone from across the room, but can also sound like educated Englishmen when they manifest themselves in a human body. Their goal, as it always is in a product as mindless is this, involves some kind of world domination over mankind, but the film is too dimwitted to be clear on that—surpring, to say the least, since the screenplay spends so much time establishing a direct antagonist in the alien being known as "Mr. Gray."

The director, Kasdan, is a fine filmmaker with more than a few good products under his belt—his most recent being "Mumford"—but here, he is victimized by a screenplay of insufferable proportions, as if he's merely moving a camera around and letting the material assault his vision. His biggest error, however, lies in the fact that he surrounds such craziness with flawless cinematography; beautiful overhead shots of landscapes blanketed in snow, and quick camera chases through a visual playground known as the "memory warehouse," are scattered across the canvas, upstaging the rest of the material without even realizing it.

I deliberately avoid discussing more of the plot's misgivings further, because "Dreamcatcher" is a movie in which the errors have to be seen to be believed. But whatever the motivation is, make sure it isn't founded on the notion that the film's promotional trailers look promising. That's false advertising. In fact, while you're in the darkened theater, see if you can figure out why the film is even called "Dreamcatcher." The idea is there, of course, but it has just about as much weight as a feather on Jupiter.

NOTE: "Dreamcatcher" is opening in the theaters followed by a 12-minute digital short film called "The Final Flight of the Osiris," which is part of the Wachowski brothers' "Animatrix" series teasing the upcoming "Matrix" sequels. The short is a solid and concise package that provides great hope for the future of its namesake; astonishing how it manages to easily upstage an entire 136-minute movie, too.