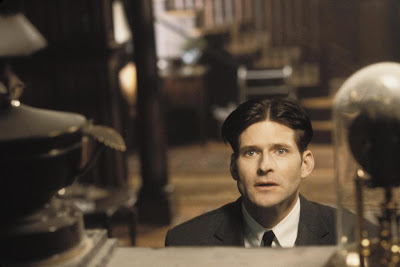 The twisted and mangled images that serve as the opening credits to "Willard" are not just exemplary to a movie of this nature, but also some of the most fierce and visually striking ones to have been scrawled across the movie screen in the recent years. Part-Tim Burton and part-Tarsem Singh in their modern yet primitive delivery, they fittingly tease the product's eccentric ideas without throwing away too much information or robbing the audience of its impending anticipation. Normally the movie itself would only emphasize the greatness of its introductory scenes, but alas, so is not the case with this rather bizarre result. There is a great idea in the fabric here somewhere, no doubt, but it gets lost, and it gets lost very fast.

In place of a promising product is this, a foul, underhanded and outright viscous little movie that has no payoff, no spirit and no indication of authentic resolve whatsoever. Viewers don't walk away from it knowing that they have been handed a genuine payoff; they leave the theater feeling frustrated, cheated and generally infuriated by most of what has happened. It is an experience bankrupt of respectability and balance, and to say that I myself wanted to hurl four-letter obscenities at the screen following the godawful conclusion is a drastic understatement.

The movie is a remake of a 1971 film, about a reclusive man whose kindness towards big and furry rodents was rewarded when the little creatures became his friends, his companions, and ultimately his followers. This movie doesn't act as if it were an exact remake, though, but more like a follow-up—the first film's original star, Bruce Davidson, is seen here only in a portrait of the title character's deceased father, hugging the wall above a fireplace mantle as if he's trying to warn his heir of the deadly cycle that awaits him in the rat-infested basement. How unfortunate that his father wasn't alive long enough to warn the audience, either.

Willard Stiles is played here by Crispin Glover, a popular character actor who is probably most widely known for being Marty McFly's father in the "Back to the Future" films. Here, Glover's screen persona utilizes the standard "shy guy" schtick—the character has no friends, doesn't speak to anyone who doesn't first instigate communication, and has a low voice that barely struggles to utter complete sentences. His boss, the shallow and annoying Frank Martin (R. Lee Ermey), knows that he isn't exactly the sharpest knife in the drawer, either, but he can't fire him because, well, he is obligated to keep an employee on the roster who is closely related to the company's founder (in this case, Willard's own father). Besides, Frank made a promise to the family that as long as the reclusive guy's mother (Jackie Burroughs) was alive, he would always have a job with his dad's old company.

But dear old mother isn't getting any younger, and Willard's employment schedule is compromised because he has to take care of her so much. Frank insists that she be checked into a care facility in order for him to apply himself on the job. Willard says he can't afford it, and that only infuriates the boss, who chooses to be mean, spiteful and downright nasty in order to get his points across. "This business is a rat race," he spouts during one of his endless one-on-one lectures, and though Mr. Stiles tries his hardest to succeed in his father's honor, it's not always an easy battle considering who's in charge and what outside obstacles are interfering. Needless to say, he hasn't found a way to let out his frustrations, either.

Enter the rats, a small but growing infestation of which is growing in Willard's basement. He at first doesn't pay heed to their low-key existence—the movie shows him buying rat traps at the local grocery store because his mom wants to get rid of them—but when a cute white rodent gets caught in one of them, guilt sets in and he willingly frees it. Needless to say, the rat repays the man's kindness by sticking around, and soon, we gather the little white creature, known as "Socrates" by his owner, is spreading word throughout the underground rat network that this is a man they can all trust. Soon hundreds of rats become thousands, and Willard isn't necessarily complaining about the increase, but is actually quite honored.

A good deal of screen time is devoted to the rats themselves, but the movie has them in a senseless choke-hold—it neither shows absolute love or hate for their existence. Willard, of course, loves them dearly, but do they love him back? Some do, we gather, but others seem to have hidden agendas. Most seem to understand every speech and every command that their owner delivers, too, and yet some don't exactly follow what is expected of them. They have no clear purpose whatsoever, other than to provide the screen with an offbeat system of supporting characters (and though the movie tries to pass off as horror, it never once feels that way). The allotted villain of the infestation, a large rat nicknamed Big Ben, takes up most of the screen time, but what is expected of the audience in regards to accepting him? Should we be embrace the fact that he carries so much character weight, or should we feel insulted that the movie doesn't take a more sensible approach with antagonism? In any movie that insists we should accept little animals like these as significant plot participants, something or someone is drastically out of touch with reality.

The movie starts off promisingly, studying its lead character in an effectively offbeat way, and when the friendship between he and the rat Socrates begin to manifest, we find ourselves actually admiring the movie's unconventional effort. It really seems to want to go somewhere, until quickly and shamelessly, the film's tolerable tone takes an unforgivable dive. It doesn't just get sour, it becomes outwardly mean-spirited. Rats begin to wreak havoc on the household like demolition experts without regard to life or decency; they kill Willard's mother, they destroy the kitchen looking for food, and they even kill a cat who is given to him as a gift. Scenes like these build and build until they have completely engulfed the story, and after a time the movie is no longer about payoff or entertainment, but about hatred, resentment, revenge, and ultimately bloody showdowns.

Any picture can be malicious if it tries hard enough, but only a select few are so mercilessly rotten that they physically repel us in the process. "Willard" is one of those films. It is a harsh lapse in taste and judgment, and I offer every ounce of sympathy I have left to those unsuspecting viewers who will be walking into the theater this weekend expecting something silly or innocent enough to be worth the admission price.