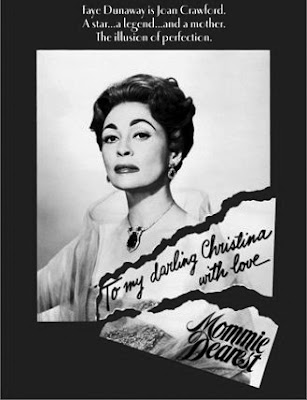 "Mommie Dearest" is a book by a woman whose motives seem questionable. During the closing moments of the film adaptation, which examines the life of Joan Crawford through the eyes of her adoptive daughter Christina, the narrator shakes her head in disbelief when her mother's last will in testament reveals no inheritance for either her or her younger brother. "Mommie always gets the last word," he explains, to which Christina answers with a certain determination in her voice, "does she?" Having not read the book itself, immediate instinct is write off this closing reaction as a plot device simply meant to tie the picture to its source material. But if it is more than that? What if that moment reflects Christina's entire reasoning behind the initial purpose of the novel? Certainly, under that kind of scenario, it is aptly possible that any truth told about Ms. Crawford and her malicious behavior is anything but the whole truth.

Whatever the answer is, chances are no one will find it in the cinematic translation. In fact, "Mommie Dearest" may very well be one of the most loathsome and sloppy screen treatments to ever have been derived from a literary memoir. The movie is a bizarre and fragmented collection of scenes showcasing little but mass hysteria, as the audience watches one of Hollywood's biggest and brightest stars descend ever-so-deeply into a realm seeped in self-indulgence and radically destructive reaction. It's an amateurish and distorted argument, in which Crawford herself emerges not as a human being, but the typical one-dimensional movie villain. This doesn't mean any of us is in a place to judge the authenticity of the facts presented in either of the book or the picture, but if there really was a specific point that Christina Crawford was trying to emphasize, it gets severely lost here and never finds its way back.

Fame, even the most casual observer will confess, can rob the human soul of its most precious and fundamental emotions, alienating the host beyond the lines of deterioration. Consider Joan's own self-victimization when the industry she loves so dearly betrays her—in an early scene, she prepares for an "important" meeting with Louie B. Mayer, only to be asked to leave MGM because of a string of flop films. She's upset, naturally, but brushes off the decision... until she returns to a quiet house and goes outside to viscously destroy her rose garden with a pair of trimming shears. Frustration, of course, albeit rather severe. But just what kind of explanation can justify her turning those outward attacks directly onto her innocent kids? The movie, alas, has no definite answer to this question because it is too absorbed by rage to even care. Child abuse and alcoholism don't exist in "Mommie Dearest" as genuine social issues, but as morbid plot gimmicks.

The title role is filled by Faye Dunaway, who physically embodies the look of Joan Crawford almost too eerily for words (the heavily outlined eyebrows being the primary case in point). Though her portrayal, we at first get the sense that Joan was merely an overachieving perfectionist, who applied herself in every way possible to compensate for the lack of love in her life. Steve Forrest (Greg Savitt) happily solves that problem by granting her the one thing she has longed for all her life—the chance to adopt a needy child. Christina, her name is, and in the first few scenes, we see a solid mother/daughter relationship blossoming beautifully before it quickly and coldly begins to disintegrate under the weight of Joan's professional life. Patience is destroyed and short fuses are lit, and soon it is all a contest to see who can last longer—the mother with her manic-like tantrums, or the daughter who doesn't always cower down in fear when she should.

Dunaway is mercilessly over-the-top in her portrayal of the famous screen starlet, but there is at least a certain luster to the performance that prevents it from falling behind the lines of plausibility. Yes, even when she's tossing around little Christina's clothes and wildly ranting about wire hangers, she remains convincing; her delivery embraces the shrilling campiness of the movie's sensationalized conviction without so much as a veiled regret. Dunaway doesn't just toss out an overzealous act simply for the purpose of mocking the persona or manipulating the audience, either; she genuinely disappears into the role. Anyone who would dare to say that she doesn't at least look or sound a little like the source is not telling the truth.

With this sentiment in front of us, why, then, does the movie that surrounds her have to be so immensely detestable? I dunno. There is neither decision nor discovery made during the course of this shapeless mess. It lacks almost all sense of logic, flinging out one scene after the next without so much as an established pattern to manage the playing field. Light and dark moments are staggered systematically like a checkerboard, sometimes even starting with one tone and shifting to another before a sequence is completed. There is nothing wrong with implementing contrast in a movie like this, but each scene here exists as either a negative or positive argument without any shades of gray. They are even absent of the desire to provide outraged viewers with necessary pre-warnings.

On a narrative level, furthermore, the film is one of the most utterly insulting. By claiming to be a complete account of Joan Crawford's twisted life from the perspective of her watchful daughter, for starters, the movie shamelessly demands us to believe that Christina remembers when she was a baby in her adoptive mother's arms, or that she could effectively assume what kind of person her mother was before she was even born. Secondly, time frames have about as much weight on the plot as an empty bottle of liquor—often, moments that actually occur several years apart appear in the film with mere seconds of separation and no advanced setup to prepare us for the abrupt shifts. Christina's first-handed testimonies into her mother's destructive lifestyle, furthermore, lack all sense of humanity; she observes, reacts, but never takes a moment to truly question why her mother was such a maniac at some intervals and such a saint during others. This not only undermines the purpose of Ms. Crawford's thesis, it also abolishes any potential for a thorough outcome.

The director, Frank Perry, knows how to set up elaborate, old-Hollywood-style camera shots here, but he has not a clue of how to imbed substance beneath the surface. It is a transparent, cold, destructive debacle that exists merely for the pleasure of wrenching stomachs. During one scene, the young Christina stares blankly at a cut of medium rare beef that is bloody in the center, the disgust of touching such a plate of food overriding even the sharp demands by her mother to eat every last bite before she leaves the table. At that exact moment, we realize that Christina's misfortune parallels the audience's in many regards—if she can't even stomach something so obviously undercooked, just how in the world are we supposed to do the same?