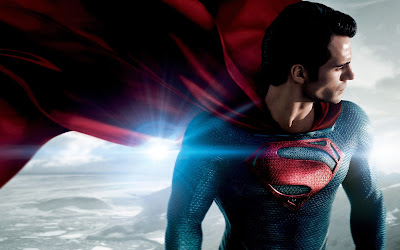 Any movie about a superhero usually begins with the same pointed questions: what are their origins, and how did they come into their abilities? The answers in the “Superman” movies have not always encouraged directors to see them as more than just a suggestive afterthought. “Man of Steel” immediately presents a distinct departure from that sentiment – in a prologue that is both vast and realized, the planet of Krypton is seen in the final throws of a demise that exposes great social unrest. According to a being known as Jor-El (Russell Crowe), the Kryptonians have depleted their planet’s core of essential resources, sentencing its inhabitants to certain doom as their habitat begins to implode. The endeavors of a man named General Zod (Michael Shannon) are stirred to tyrannical proportions by such prospects, and he spearheads a rebel movement to overthrow the existing leaders and steal from them a critical codex containing the genetic blueprints of their civilization. Shoot-outs and fast chases aboard flying starcraft ensue, and then Jor and his wife are seen stowing away the codex on a ship that will carry their newborn son across distant galaxies to a little blue planet that, hopefully, will give him an opportunity at a better life. Unfortunately for the child, those rebels too survive the experience of a dying planet, setting the stage for some sort of eventual confrontation between them.

The sequence is worth noting not just for its unmistakable detail, but also for its visualization. Krypton appears in frames that would marvel the Bradburys and Asimovs of science fiction literature – the special effects are crisp, and the images occupy that memorable element of scope that suggests they extend beyond a camera’s line of sight and stretch into the far corners of the mind. Seeing them, I admired the nerve of the director Zack Snyder, whose efforts with “300” and “Watchmen” have clearly given him fluent understanding of the intricate cinematic language buried within comic books. But he is not just merely putting a spin on a pre-existing concept in these scenes; rather, they are being fashioned out of some inner creativity, and seem liberated from the traditional underpinnings of the core Superman stories. I dare to wager that an entire movie about Krypton would be embraced in this era of impeccable visual illusions.

“Man of Steel” marks the sixth film venture of this well-known DC comic book series, and arrives committed to one distinct pledge: the superheroes of today insist on being shaped by realities that are closer to our own than before, removing the gloss and pomp of those overzealous backdrops that were staples of earlier interpretations. One doesn’t question this prospect in the face of examples like the recent “Batman” pictures; when a filmmaker collapses the divide between both worlds, it grounds the hero in real conflicts that inspire greater empathy. Raised by farmer parents when his alien ship crashes in their fields, the boy grows up to become the quiet and enigmatic Clark Kent, a kid who has amazing gifts but has no idea how he got them, or why. As a child he is encouraged into isolation from other classmates for fear of exposing them to great danger, and when his senses develop beyond the understanding of his young mind, it only perpetuates the mean gossip of other kids who consider him a freak.

The movie plays effectively with that concept for its first half, avoiding the temptation to obliterate pace for the sake of sending its protagonist right into the costume dressing room for a series of action-oriented conflicts in which he can test out his skills for eager watchers. Henry Cavill plays Clark Kent with a precision that perfectly understates the obvious, too. He treads through a series of conflicts with solemn conviction; Kent appears deep and brooding, told to keep his secret powers hidden from his peers by a cautious father figure (Kevin Costner), and does so even when circumstances inspire other desires. Some occurrences – such as a scene involving a school bus falling from a bridge and into the raging river below – are too critical to turn a blind eye to. The continued appeal in Superman, I reckon, has less to do with his otherworldly powers and is rooted more in simpler notions: he is, at his root, a nice guy carrying around the purity of conscience, and in the clout of an era seeped in continuous crime cycles, the outlook is encouraging.

…and then, in one instant, the door separating basic characterization from wall-to-wall action is torn from its hinges, and the movie sends us into a final hour that plays like an adrenaline overdose. In that bracket of time, we bear witness to the following in various increments: deafening explosions, snide verbal exchanges and outbursts, alien and military aircraft colliding in mid-air, giant robots tossing around people and objects on open highways, Kryptonians fist-fighting with superhuman outcomes, buildings bursting into flames, innocent people fleeing and screaming, high-rises collapsing in on one another, and so on. Somewhere in all of this chaos are the movie’s three key players: Superman, Lois Lane (Amy Adams), and General Zod, engaging in a tug of war with Earth’s resources as the invading rebellion hopes to acquire the codex and use our planet as a petri dish in bringing their civilization back from extinction. You certainly can’t tell, however, based on the way characters interact with little regard to their surroundings – generals bark orders, Superman himself seems intent on pummeling his opposition even while people around him are screaming and probably injured, and Lois is enamored by the sight of him to an extent that almost blurs out her own immediate danger. By the end, much of Metropolis and its surrounding areas have been demolished beyond comprehension, and yet somehow Clark and Lois manage to find time to stop and make out amidst the smoldering wreckage.

The screenplay by David S. Goyer is like an arm wrestling match between brain and muscle, and when one takes charge the other falls out of line. This is common in most blockbusters that retreat to dependable formulas, but seldom have they been conveyed to this extent, and with such jarring results. Goyer has written the story outlines for a handful of similar movie adaptations (including Nolan’s “Batman” films) and surely knows his way through the highways of superhero psyche. What inspired him to abandon his good sense halfway through this story, however? In a time when the approach is on good footing at the box office, taking risks with material as universal as Superman is a fruitful prospect. The scenes on Krypton, which are unexpected, stress that to great lengths. To hear “Man of Steel” tell it, once good old Clark is established as the lowly and quiet outsider with great hidden talents, there isn’t any other direction for him to go except for over-the-top. Sure there is; this movie just doesn’t have the desire to find them.


Action/Drama (US); 2013; Rated PG-13 for intense sequences of sci-fi violence, action and destruction, and for some language; Running Time: 143 Minutes