The Illusion of Influence 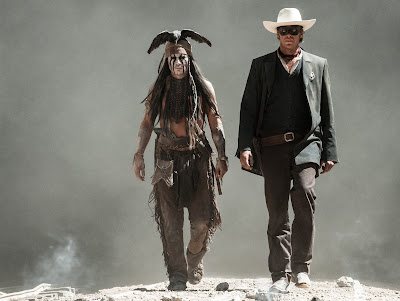 My admiration for Johnny Depp and the dexterity he brings to his movie roles has been unwavering for decades, but the diatribe he and his cohorts from “The Lone Ranger” went on during the recent U.K. premiere plays like a blatant absence of sanity. In the press room, the brains behind Disney’s biggest flop of the year rallied around director Gore Verbinski and continued to push their faith in their big-budgeted remake of the famous television series, but took the argument against its domestic failure up a notch when they opted to direct the crosshairs of blame onto the critics.

According to a recent article on Variety.com, the feelings are universal amongst those behind the film. “I think the reviews were written seven to eight months before we released the film,” Depp proclaimed. Jerry Bruckheimer echoed the sentiment, announcing, “I think they were reviewing the budget, not reviewing the movie.” And Armie Hammer, Depp’s co-star, took the vitriol up a notch by using a generalization on the movie reviewing world to explain his reasoning. “This is the deal with American critics: they’ve been gunning for our movie since it was shut down the first time. That’s when most of the critics wrote their initial reviews. It’s gone to an unfortunate place with American critics where if you’re not as smart as Plato, you’re stupid,” he said.

Intrigued by the outward suggestion that critics do indeed now have the influence to kill a film’s financial aspirations, I spent a few minutes over at Rotten Tomatoes – still the most reliable and accurate depiction of what a critical consensus is for all movies – and did my own research. While it is true that “The Lone Ranger” only garnered a 28 percent rating with reviewers and has yet to cross $100 million at the domestic box office, the recent “Man of Steel” too was a critical disappointment (its rating of 57 percent is slightly better but still considered “rotten”), and yet it has grossed $287 million in the states so far. On the flip side, “Pacific Rim” received very favorable reviews (71 percent approval) and is already at the bottom of the top ten box office, and too has yet to cross the $100 million threshold despite having a budget of nearly double that.

If one extends the argument to more than just recent films, then there’s more interesting discoveries. The worst reviewed film in the all-time top ten domestic box office is the first “Star Wars” prequel, “The Phantom Menace” (57 percent, and $474 million earnings). And in the top ten worldwide charts is “Transformers: Dark of the Moon,” which has a 36 percent rating, and Depp’s own fourth “Pirates” film, “On Stranger Tides,” became part of the elusive billion dollar club despite only getting a 33 percent approval from the movie writers.

Digging deeper in search of said reviews that might have been written long before the movie was actually released, I found the following blurbs: “The fatal flaw in Jerry Bruckheimer's monumentally monotonous production is that it forgets it's duty to entertain,” writes Peter Travers of Rolling Stone; “Stuck with a character they can’t really transform or darken to meet the tenor of our times, they instead spend much of the movie making fun of him, turning him into a galloping joke in a white hat and black mask, which makes it extraordinarily difficult to care about his exploits, no matter how inventively staged they might be,” writes James Kendrick of Q Network Film Desk; and Liam Lacey of The Globe and Mail makes this observation: “Depp’s oddball performance feels separate from the rest of the film, particularly overshadowing Hammer’s Lone Ranger. Though putatively the star character, he’s a consistently bland figure who transforms from milquetoast city slicker to straight-shooting lawman with little development.” If my colleagues really made up their minds long before the movie was actually seen, then I applaud their clairvoyance.

In essence, what Depp, Bruckheimer and Hammer have done is made a knee-jerk assumption and announced it as fact in an era when information and research is more readily available to your average Joe. Who are they kidding? After a mere ten minutes of research, even I could negate 99 percent of their claims. And that’s without relying on the hindsight of being a writer of the movies for the past 16 years and knowing full well Hollywood’s vicious cycle of laying their gargantuan flops at the feet of writers who were honest enough to call turkeys out for what they were. The example set by the stars of “The Lone Ranger” is but a mere echo in the chain started generations before, when the filmmakers of “Cleopatra” or “Howard the Duck” saw evaporating ticket sales as a driving influence to accuse critics of hidden agendas.

What these gentlemen forget to consider in their announcements, however, is the growing impact of audience reactions on the influence of box office potential. Cinemascore.com, a site that prides itself on being “Hollywood’s Benchmark,” is routinely cited by the likes of Box Office Mojo as a likely indicator of what a movie’s future will be on the financial road. Following the July 4th weekend opening of “The Lone Ranger,” they made the following observation: “While the original Pirates movie opened well, its ultimate success came from fantastic word-of-mouth. Unfortunately, it doesn't look like The Lone Ranger will experience a similar bump: its "B+" CinemaScore suggests that it will perform similar to other major Summer movies (as in, fall off quickly from opening weekend).” To you and me, a “B+” sounds reasonable for most summer movies, but if the perspective of the outlets who report solely on numbers is that anything less than an “A” is indicative of a troubled box office trajectory, then maybe that shows a more definitive severity on part of moviegoers in a climate saturated in endless remakes and sequels.

I question the reasoning of these three not for my own defensive purposes as a writer of film – on the contrary, I almost wish I had that much influence on what people went and saw! – but as a spectator in the obvious lazy tendencies of artists looking for scapegoats. Depp in particular is worrisome in his views here; often the highlight of many of his own films – and no doubt the same for “The Lone Ranger” – many of his releases in the recent years have too seen critical lashings and yet have done just fine at selling tickets, essentially defying the perception that a film’s financial opportunities are relative to the feelings of the movie press. Consider, for example, that three of the 16 films that have earned more than $1 billion at the worldwide box office are vehicles in which he is the star, and every one of them has an overall unfavorable consensus on part of the critics. How did they transcend their reputation whereas “The Lone Ranger” could not? In those UK press interviews, Armie Hammered argued that some movies manage to endure based on positive audience remarks and cites “World War Z” as a recent example of another film that American critics tried to kill. “It didn’t work, the movie was successful,” he concluded. Never mind that said film actually did receive favorable reviews overall (71 percent success, to be exact), but I digress.

I missed “The Lone Ranger” when it was released, but my reasons had nothing to do with its potential appeal; at the time, I had not written a film critique in almost two years and felt it was more important to play catch-up before absorbing many of the new releases. Perhaps it’s an enjoyable film, and maybe I will discover that at some point. But is it still really easier for victims of box office tragedy to rest on the belief that film critics are malicious enough to drag a movie through the mud based on its troubled conception as opposed to just saying that audiences, you know, didn’t connect with the end result? I guess so.