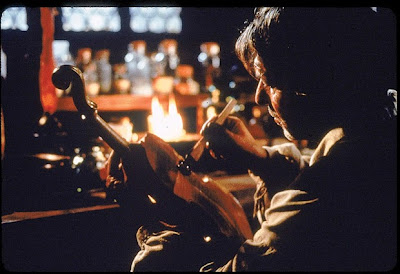 The obsessive nature of man is stirred by desires of impossible reach – desires to capture perfection, to acquire something greater than the mind can comprehend, and to bask in a glow of inspiration that may open a pathway to unmatched elation. The fault in possessing such aspirations is that the human soul is usually too frail to endure the lessons it must confront. For all the important players in “The Red Violin,” that message is shown within the presence of a singular object that transcends time and culture. Crafted in 1681 by the hands of a gifted violin maker named Nicolo Bussotti (Carlo Cecchi), a remarkable violin – so named in the title because of its distinctive red hue –becomes a physical and emotional current affecting various sets of lives from one century to the next on a journey of divine mystery. It possesses great secrets. And in all instances, it passes from one owner to the next as if a muse meant to inspire them (and their observers) to masterful heights – heights, unfortunately, so great that they bend the will of men and women to equally tragic depths.

There is a scene opening the movie that exercises these points in a subtle fashion. As Bussotti supervises the carving and craftsmanship of a group of would-be instrumentalists in one continuous camera shot that swoops from one side of the room to the next, a shy youngster hands the finished shell of a violin to his teacher, listens to minor praise and then witnesses the fruits of his labor being smashed into the side of his workbench. The audience reacts with knee-jerk disdain, but it gives way to certain understanding: for this impassioned craftsman, anything less than absolute perfection is a crime to an instrument player – a crime, we suspect, that is committed when the hands of the creator are not guided by some great inner inspiration. What arouses him, then, to the creation of one particular violin so utterly precise that it will allow it to outlast the weathering effects of time and peril in the grasp of hands that only passingly sense its quality? As often is the case with great artists, a quiet suffering that results from great tragedy sometimes empowers one to yield their most important work. In the example of Bussotti’s endeavor, it becomes this movie’s essential plot device.

There is a thought process at work here that most directors would take shortcuts with; for Francois Girard, the bold filmmaker who made “Thirty Two Short Films about Glenn Gould,” the idea must have seemed like familiar territory ripe for full realization. Five story arcs, each overreaching the next, tell of the tragic stories of an assemblage of characters whose lives are enriched and then suddenly torn asunder by the presence of this one flawless object that sweeps into their lives. The underlying suggestion early on is that it may in fact be an immaculate influence that curses its players, but in reality the message is much simpler than that. And through a direction that is dedicated to the material, “The Red Violin” defies any and all possibilities of its ideas turning into convoluted episodes with no centralized thread joining them. Here is a movie that would not work in most conditions, and yet casts aside the clout of its scope and finds all the right notes in an experience of poignant and intense quality.

It all begins in the creation. In 17th century Italy, Bussotti carves away at what he perceives is his finest creation while anxiously awaiting the birth of his son; his wife, the uncertain Anna (Irene Grazioli), does not look forward to the event with as much enthusiasm, and quietly fears for her life in the wake of what she perceives will be a painful and difficult event. Her instincts, it turns out, are true, and both mother and child die in a childbirth that happens quietly off-screen. Nicolo, so deadened by the loss, finally finishes his creation in secret by painting it with a varnish that is distinctly red – which, the movie tells us, will also be his last crafted piece. Here the tone is set for all others who will come in possession of the violin, and the lumbering sadness of its creator seems absorbed in the very wood it was fashioned from.

Following its completion, the movie jumps ahead a hundred years to Vienna, where the instrument has come into the possession of an orphanage, and one particular child named Kaspar (Christoph Koncz) seems to have mastered the musical language capable of reverberating from its strings. The skill he possesses so impresses a man named Anton von Spielmann (Florentin Groll) that he adopts the boy almost on sight. His goal: train and develop Kaspar into a master violinist that would impress even the heads of state. But is Kasper, so young and agile, really strong enough to meet those demands, even with a perfect violin at his side?

The trend of uncertain fate continues through other eras and cultures. A musician in Oxford comes to acquire the violin in a later story and uses it as a way of luring a woman into a passionate love affair. Later still, it arrives in the hands of a collector of western instruments living in communist China, where he must hide it from a government that rejects the influence of outside cultures and sees their endeavors as threats to a revolution. His death, alas, means the Chinese will inevitably come into possession of it and varying other string instruments collected through time, and the collection is then relinquished to an auction house in Canada where, after being carefully studied and researched by a violin expert named Charles Morritz (Samuel L. Jackson), it is auctioned off to a crowd of eager bidders with important secrets.

The two threads that keep the movie progressing forward come in the form of a pair of key sequences that are sliced in segments and then revealed in increments between each of the narrative pieces. In the first, Bussotti’s wife Anna, uncertain of her fate after pregnancy, seeks the wise words of a tarot reader whose proclamations have less to do with her own life and reveal more about trajectory the violin itself will take. In the latter, an auction in Canada gets underway just as the Red Violin will go up for purchase, and the bidders are slowly revealed to be descendants from characters featured prominently in the preceding arcs. In both instances, what the screenplay does is create a building tension in the importance of these events with precise (and convincing) foreshadowing. Considering the intricate nature of all this material, however, the direction is not haphazard like one might suspect; in fact, it’s rather fluid and consistent at giving its audience the full ride without them falling off the rhythm. Each of the stories holds its own weight and would be stirring even in isolated circumstances; together, they swell into a menagerie of sophisticated emotions that keep us gripped.

The movie indeed has a center: it is not the violin’s creator but rather the violin expert played by Jackson, whose realization of this important finding on the eve of its auction results in a performance of mannered intensity. Unlike all those who came before him, Morritz does indeed comprehend the importance of this red violin enduring so long a journey over three centuries; knowing the story well (and conscious to the notion that it is, indeed, the violin maker’s final crafted piece), he becomes overcome by the research in order to verify the authenticity of the instrument, and that in turn leads him down a road of heightened insight that culminates in a climax choreographed with swirling intrigue. The big important reveals are not only intense, but rather astounding even in context with the material that comes before it. And through such disclosures and resulting actions, Jackson’s performance stays focused and precise, never going overboard with reactions or seeming too passive with them. It may very well be one of the finest roles he has ever conquered.

If the movie’s message is to be summed up in one statement, then the point is really as succinct as any that might accompany mere fables or fairy tales: man’s desire for perfection is fool-hearted, and in the presence of a singular flawless object, our limits are exposed to fracturing lengths. Seeing the movie 15 years after its original run, one also wonders if such sentiments resonated deeper with the director than us; after making this film, Girard’s career peaked, and he only made one more picture in 2007 before seemingly retiring from the business. His reasoning has no doubt been echoed through the times by creators in varying other venues; Hemingway, as a crude example, shot himself when he felt his creative well had run dry in writing stories. At a certain point, I suppose, there is a class of artists who feel they have reached the summit of their creative peak, and are fully content to drift off into the slumber of professional departure. In the case of Girard, he left behind a film that leaves little doubt as to the validity of that statement. Like the immaculate instrument it follows, “The Red Violin” is a piece of filmmaking fully refined by the hands of someone who believed in the material, and the effect it leaves us with is one of transcendence.