Musings and Observations from the 71st Golden Globes 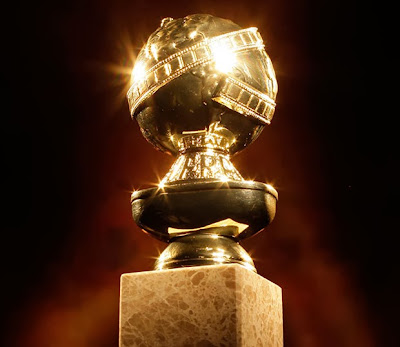 Just as my dialogue towards the movies went through certain dormancy in the recent years, so did my attention span when it came to the annual awards festivities. Serious entertainment journalists have an obligation, in a way, of covering them; they encompass a critical snapshot of the most important achievements in moviemaking of any given year, and in some cases prophesize trends with actors and filmmakers in the films that will follow. My personal commitment always was exclusive to the Academy Awards in my writing, which may be enough to indicate the allure that other ceremonies have for me in this moment… including the odd but amusing Golden Globe awards that tend to kick off the final stretch of annual Hollywood accolades.

The trick is in keeping the material interesting; generalized recaps of the events are perhaps done better by news outlets rather than bloggers or critics. The age of information knows no limits when it comes to manufacturing accessibility to thirsty readers, and in the collective consciousness of social media, the trend is in instantaneous sound bites (which became a hot commodity with the advent of Twitter). Something about real-time observations on big things ranging from sporting events to news bulletins was exciting to others, no doubt because it also allowed readers to interact with them. Eventually the celebrity world followed suit and joined in on the hoopla, and now our individual awareness of the private lives of others has reached a fevered pitch of clarity that most wished would have stayed locked away (anyone remember the online Charlie Sheen meltdown, after all?).

The silver lining, I suppose, is that it allows some of us to try new things. Last year I took to Twitter for the Academy Awards, and tweeted reactions to various occurrences during the telecast (most of which relating to Seth MacFarlane, whose hosting of the ceremony was, if anything, wonderfully awkward). This year, I’m attempting similar “real time” observations in varying formats. Below is a log of all those observations as they happened during this year’s Golden Globe awards, arguably the biggest of the televised awards season precursors.

[4:56] Having not actually done any running commentary on any awards show other than the Academy Awards in the years past, I am excited to be getting my feet wet in it again by starting out with the smaller events. The Hollywood Foreign Press is also notoriously unpredictable, on a wavelength that separates them from the traditions of critics and other awards circuit groups. That definitely adds to the allure.

[5:00] Amy Poehler and Tina Fey are the picture of a perfect hosting team, perfectly in synch with one another and bouncing around a synergy that is infectious; why are they here and not on the Academy Awards? When the Hollywood foreign press branches out in order to be more “current,” we get comedy gold like this duo, or the audacious Ricky Gervais; when the Academy does it, we get James Franco and Anne Hathaway sleepwalking through innocuous musical numbers and badly written one-liners.

[5:09] As disconnected I am from the movies of new, I can’t help but feel even more foreign listening to everyone talk about the television portion of the show. I don’t get too terribly involved in TV because, well, I just never have the time. Who finds the time, really? There’s so much work, so many friends, books, games, distractions… and of course, thousands and thousands of movies to sift through. I applaud those who have the dedication to follow the wide array of television shows available in so many formats, because I am certainly not one of them.

[5:10] Wait… some presenters are coming out from the audience instead of backstage? I find that… odd.

[5:11] Another win for Jennifer Lawrence, who has emerged in the last two years as an awards darling. Having not seen “American Hustle” but fully aware of her ability after “The Hunger Games” and “Silver Linings Playbook,” I have nothing but admiration and respect. She’ll continue to go places.

[5:22] I won’t comment too much on television nominations and wins considering my disconnect with most of the format, but I will say this: that “American Horror Story” thing has some sparkling talent associated with it. I’m sure watching it plays like a collective thespian orgasm.

[5:26] Two bleeps in the first half hour. Let’s just pull down the formality and let the celebrities cuss openly. We all know they are doing it for crying out loud.

[5:28] Why have I not seen “Captain Phillips” yet? It’s time to get off my ass and catch up. After writing as much as I have in the recent months, there’s certainly no excuse.

[5:36] Aside from owing it to myself to see all these missed movies, I also owe it to Martin Scorsese to see his “The Wolf of Wall Street.” I’ll get right on that, sir.

[5:40] In my online surfing between the “noise” of the television-related awards, I discover that a sewer line busted underneath the Golden Globes red carpet shortly before the ceremony began, leaving behind a foul stench. There’s a joke in there somewhere, isn’t there?

[5:49] I don’t comment much on gowns or attire on celebrities (that’s such journalistic bottom-feeding), but Kate Beckinsale is regal in that silver dress. She doesn’t have to say anything, really; her presence is almost overpowering. That, my friends, is a born movie star.

[5:52] I am not a fan of the musical outros used to get winners to stop talking. Just let them talk already. We all know you are going to go over on time; stop diminishing their moment.

[5:54] Bono wins another award for Original Song. There’s irony in that realization, because little that Bono has written in the recent years qualifies as “original” to me.

[5:56] As a side note to the Original Song win, I am reminded of what this show is missing this year: an evil stare from a jaded onlooker in the audience. Two years ago Elton John paralyzed the camera with his deathly gaze towards Madonna, who beat him out for Original Song after knocking her in the red carpet interviews. I wonder if we can anticipate Meryl Streep sneering in protest when Amy Adams picks up another award later tonight.

[6:16] Whatever just happened with Amy Poehler dressed as a boy, I gather, was supposed to be funny. But I didn’t laugh.

[6:19] “Dying is easy; comedy is hard. I believe it was Shia LeBouf who said that.” This, Jim Carrey, is why we love you and your delivery.

[6:21] Finally, an award handed out to a guy I actually saw in a movie this year. Jared Leto was riveting in “Dallas Buyers Club,” and the honor is well deserved. On the flip side, the acting win streak for “American Hustle” has been broken.

[6:28] Emma Thompson’s opening comments about the brilliance of a good screenplay are spot on. 90 percent of our great movies originate from the craft of amazing writers. And as a follow-up, Spike Jonze’s win for “Her” is another of the well-deserved achievements of the evening.

[6:44] … and now I am starting to tune out. Did I stop covering these award shows because I was disconnected from the movies, or because watching celebrities thank half an audience with a lump of gold in their hands just isn’t that amusing anymore? Food for thought.

[6:46] Congrats to Michael Douglas for his win in “Behind the Candelabra.” I have not seen it, but Douglas is undeniably consistent in his profession. And heck, as long as he isn’t talking about oral sex giving him cancer, I could listen to him banter for hours.

[6:53] Well now I have no reason to hold off watching “Frozen.” Not that I needed one anyway; I am still a sucker for in-house Disney cartoons. Congrats on the Animated Feature win (and moreso, thank you for not giving it to “Despicable Me 2” or “The Croods,” which were subpar even by animated film standards).

[7:03] My feelings on Woody Allen’s movies are well known after my review of “Blue Jasmine” caused such a stir, but I’ll reserve sarcasm for the sake of the festivities of the evening. You’ve been making movies a long time sir, and there’s no denying you’ve touched a lot of people with them. So congrats on your Cecil B. DeMille achievement tonight, even though you didn’t actually show up to accept it.

[7:17] Seeing that clip of “Gravity” again and then cheering on Alfonso Cuaron’s win for Directing is, so far, the thrill of my night. It’s the best movie I saw in 2013, and will be talked about and watched for generations. I stand by that announcement even now.

[7:20] Tina Fey making fun of Michael Bay’s recent public slip-up: PRICELESS. If you haven’t exposed yourself to the original video of the incident, do so now. Sometimes we movie junkies live for moments like this.

[7:38] “American Hustle” is now a lock on a host of Oscar nominations this coming Thursday. But you didn’t need me to tell you that.

[7:44] “Like a supermodel’s vagina, let’s all give a warm welcome to Leonardo DiCaprio.” Yeah, Tina Fey, your brilliance knows no limits.

[7:45] There was never any doubt that Cate Blanchett would win for her performance in “Blue Jasmine” tonight. What is more refreshing is the totally unscripted acceptance speech, given under the influence of a few shots of vodka. Somewhere on the other side, Judy Garland’s jaw is still agape at that final remark.

[7:57] Another non-surprise: “12 Years a Slave” wins the big award of the evening, the latest in a long line of achievements that were started by the critics groups last fall. Oscar chances? Yeah, I’d say pretty darn high.

[8:00] …and that’s a wrap. Nothing terribly dynamic or outlandish to see this year, but that’s the risk you take when you cram a bunch of these personalities into one room; sometimes there’s big shockers, other times it all plays like a straightforward affair.