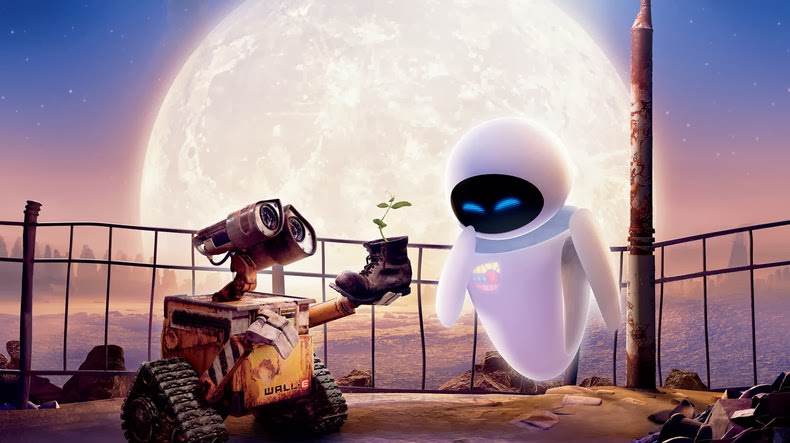 The truth is all in the eyes. In moments of grinding routine and isolation, they stare beyond objects with a seeming sense of longing, like those of an emotional being displaced from the intimacy of interaction. Clips from a movie musical play over a small screen inside a metal shack, and he gazes at them not just with perplexity or wonderment, but also with a slanted brow that suggests untapped desire. How he came to possess these sensations is guesswork in a story unburdened with the formality of comprehensive setup, but this much is clear: the robotic creature at the center of Pixar’s “Wall-E” is something very special, and for 98 minutes moviegoers are not so much witnessing his antics as they are projecting his values into their own existence, and finding resonance in the notion that life, perhaps, really can be simplified into some kind of universal declaration. To see these sentiments delivered so profoundly, furthermore, speaks volumes to the power animation possesses in cleansing minds weathered by the cynicism of adulthood.

The Pixar brand was once a pioneer in the evolving techniques of animation using computers, but now, under the direction of a new generation of ambitious artists and enthusiastic storytellers, the results transcend the escapist boundaries of the genre to become some of the most inspiring motion pictures of our time. In the company of “Finding Nemo,” “The Incredibles,” “Toy Story” and “Ratatouille,” “Wall-E” takes that incentive a step further – it tells an insightful and moving story by convincing us through long passages of silence that two mechanical beings, each destined for distinctive missions, could evolve past their programming and learn to admire (and perhaps even care) about one another while the worlds around them chug along like machines. The irony is not lost behind childlike gimmicks or sight gags; nor, for that matter, is the movie’s sense of social awareness buried behind forethoughts to cater directly to the needs of young viewers. In many ways, this is the kind of movie that Walt Disney himself sought to create in the studio’s golden years: deeply enchanting, yet interlaced with an underlying thesis that becomes enriched by the knowledge that comes with age.

The movie takes place in some relatively distant future, when Earth has been abandoned as a result of depleted resources, and all that remains is endless piles of garbage created by mankind’s insatiable lust for consumption. Amidst the heaping piles of trash emerges the lone figure of “Wall-E,” a small robot who operates with only one programming mission: to collect, compact and organize the endless supply of trash in order to make the surface inhabitable by life again. Alas, here is a machine who has probably been at the job a lot longer than he was destined to be, and in one early scene where he collects the remains of one of his peers, we catch a glimmer of a more elaborate truth: this program once included hundreds of “cleaners” robots, but the mission failed when the numbers could not keep up with the demand (or the harsh elements), and this one mechanism simply persists on his routine because, well, that is all he was ever designed to do.

Sometime in the 700 years of this failed venture, Wall-E not only outlasted all other cleaning robots but also developed a certain level of consciousness, giving him reactionary insight towards specific sights and sounds. There is a moment early on where he interacts with a cockroach he considers his friend, and when the insect is accidentally trampled on, he responds less like a machine and more like a panic-stricken kitten. Inside a shack that he calls home, his eyes wobble with intrigue as he puts organizes salvagable objects he has collected from the day’s work (yet knows little about). And then we spy him watching a segment from “Hello Dolly” on an old VHS player in which lovers sing and hold hands, and suddenly the look in his eyes shows something more poignant than just mere fascination: they reveal genuine sadness, and a yearning for some level of companionship in a world where all possible interactions occur with a cockroach on the receiving end.

Characters in animated films carry these insecurities often for the sake of advancing the plot, and “Wall-E” follows that thread of reasoning succinctly. After he discovers – and rescues – a plant growing in the shade of another pile of garbage, an unknown ship arrives and leaves behind a sleek, modern-looking drone named EVE. Very female in look and mannerism, her own mission is more urgent: find any signs of sustainable life and deliver them to a ship known as the “Axiom,” where the last vestiges of humanity reside and await news that their home world can be reclaimed. Conflicts arise out of that goal, not the least of which is the notion that Wall-E looks at EVE like the companion he has desired for hundreds of years; she, in turn, finds the robot charming, and giggles when he clumsily walks into things. When she accidentally discovers the plant he has saved, however, it sends a signal to the original ship and EVE is whisked back into space. Needless to say, the now lovesick robot opts to follow by being a stowaway.

All of this is choreographed in a manner that disrupts one principal rule of cartoons: the need to convey the story through informed dialogue exchanges. A good third of the movie passes before the first words are even uttered; in that time, EVE and Wall-E’s interactions are articulated through robotic bleeps and sound waves that act as communication between them. The script by Andrew Stanton and Jim Reardon, I suspect, implores this method for the sake of broadening the appeal of the story – without words to muck up the momentum, the story of these two can be simplified and understood by all cultures in the audience. That is a clever technique considering the genre’s checklist of necessities, but you know what they say: a little audacity doesn’t hurt if it’s for the enhancement of an idea.

Once the human characters emerge and words do become a necessity, they basically are used to call attention to the movie’s deeper social motives. What kind of situation would cause Earth to be so overrun by careless upkeep that it would displace our own civilization? The movie implicates a standard that runs parallel to our own: our thoughtless and incessant need to consume things in mass quantities without regard to any environmental fallout. To match that satire, the human characters are seen aboard the Axiom in a state of perpetual lethargy; they recline in hovering chairs, engage in pastimes that require little body movement, and exist in a continuous routine that diminishes their aptitude mentally and physically (when one person falls out of his chair, for example, he can’t even get back up into it; humans have spent so much time sitting down that the bones in their legs haven’t grown in correctly).

These are ideas most often seen in the live action curriculum; to see them here, in a movie with all the gloss and polish of an ambitious childhood cartoon, is to see the very nature of animation stretched to the pinnacle of possibility. The added benefit is that the movie doesn’t bog them down in murk or gloom either, which can be commonplace in satires. In fact, “Wall-E” is perhaps the brightest and most vivid of the Pixar films since “Finding Nemo,” which in itself was enriched by endless visual splendor. Furthermore, the look of the movie works on two levels: one as a mockery of consumerism, and the other as an adventurous landscape meant to inspire the adventurous nature of young viewers. Example: the Axiom ship looks less like a habitat and more like a commercialized shopping center, but its narrow corridors filled with busy machines are lively and energetic (they reminded me of the ambitious doorway warehouse sequence in the climax of “Monsters, Inc.”). In countless ways, this is the kind of movie that ensnares all age groups and rewards them in joyous unity.

And yet, even upon layers and layers of subtext and insight and sparkling visual imagery, the very glue of the film comes down to one simple character with swerving robotic eyes, who is whisked out of routine and into an adventure where his actions go to the root of one simple goal: to lead a life more adventurous and rewarding than what has initially been dealt to him. There is a moment towards the end where Wall-E and EVE finally have the chance to pause after wall-to-wall conflicts keep them apart, and their feelings are no longer concealed behind mechanical shells; their hands meet, and robotic faces devoid of traditional smiles seem to convey an expression of glee that is incredibly vivid. And in that moment, in some implicit manner, you gather exactly how the lovers of “Hello Dolly” must have felt when their own hands touched at the conclusion of a song.